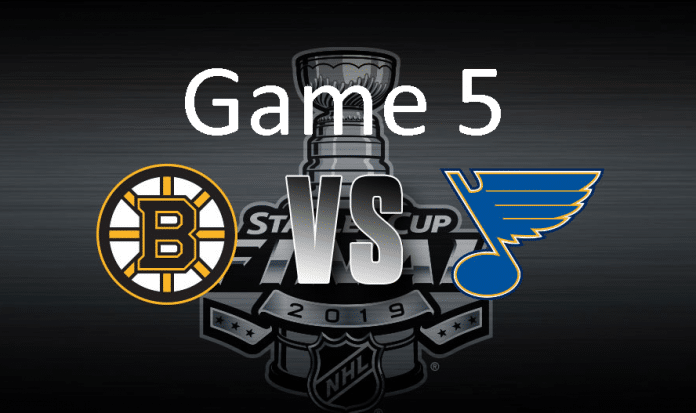 The St. Louis Blues clawed back into the Stanley Cup Finals with a Game 4 victory, and now can really put the pressure on by pulling off the upset in Game 5. The Boston Bruins are back at home for this one and have no intentions of allowing the Blues to control this one.

This is a pivotal matchup as the Stanley Cup Finals is reaching a fevered pitch. The Bruins are the favorites, and a victory would put them in great position to win the championship. However, St. Louis has done a nice job of hanging in and two more stellar outings would allow them to hoist the hardware.

The Bruins are the -153 favorites to win the series, with the Blues the +133 underdogs to hoist the Stanley Cup.

The Blues were the better team down the stretch to send this back to Boston tied at 2. Vladimir Tarasenko scored his 11th goal of the playoffs for the Blues. St. Louis goalie Jordan Binnington was pulled in Game 3 after Boston dominated on offense, but he bounced back in this one by holding Boston to only a pair of goals.

Bruins captain Zdeno Chara took a puck to the mouth, which kept him out of the game the rest of the way. Chara remained on the bench but his status for Game 5 is up in the air. He reportedly has a broken jaw, but there are reports that he could still try to play through the injury.

It would be a big loss for Boston if he cannot go as Chara has a goal and five assists in the playoffs and is one of the staples on the team. The Bruins will be short-handed on defense if he cannot play.

The Bruins are dealing with some key injuries, which could lead to some issues on the defensive portion of the ice. The Blues will take advantage and get some scoring opportunities, but Boston will bring its offensive ‘A’ game and come out on top to move back ahead in this back-and-forth series.