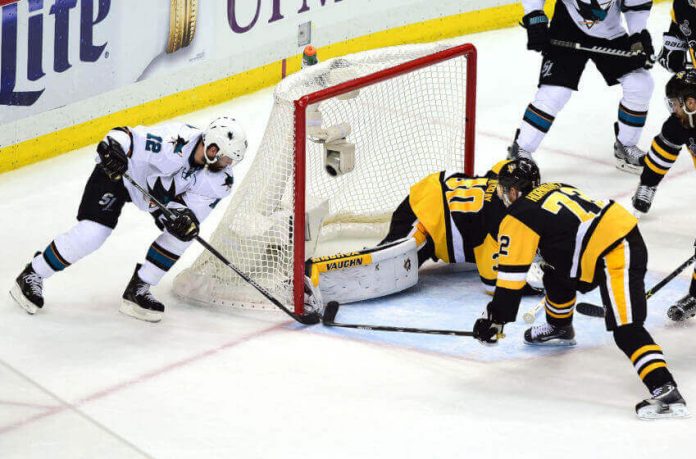 From an historical perspective, the San Jose Sharks and the Pittsburgh Penguins couldn’t be much different. The Sharks have never been to the Stanley Cup Finals. The Penguins have now been here three times in the last seven years.

San Jose is notorious for choking away playoff series time and time again. Pittsburgh has been known for winning the biggest games when they matter the most.

Names like Joe Pavelski, Joe Thornton and Patrick Marleau are known for the fact that they’ve never played in the NHL playoffs. Sidney Crosby and Evgeni Malkin have been proven winners year after year.

Yet here we are in 2016 NHL playoff predictions, with the Sharks and the Penguins colliding for the right to hoist Lord Stanley’s Cup in a matter of weeks. Despite their contrasting history, they really are two sides who are spitting images of each other.

There’s a reason the oddsmakers have a really tough time deciding on the Stanley Cup favorites. The Penguins have opened up as the -150 chalk (Shark +130 underdogs according to some bookmakers), but that’s really just an indication of having home ice advantage in this series, more than anything else.

Pittsburgh is a -135 favorite to win Game 1 on Monday night at the Consol Energy Center, and that more or less implies that the home team is going to be favored by margins of somewhere between -115 and -145 in every game of the series.

Both teams have very young goalies that are going to be counted upon to come up large during their biggest tests of their careers.

Martin Jones actually has a ring as the backup goalie to Jonathan Quick in LA, but he had never played any playoff minutes in the past. In his first year as the primary net minder for a team, he’s 12-3-3 with a 2.12 GAA.

Matt Murray was injured at the start of the playoffs, and up until March, he was thought of as nothing more than the security blanket in case anything happened to Marc-Andre Fleury. It did. But Murray hasn’t missed a beat. He’s got 11 of Pittsburgh’s 12 wins in the postseason, and his 2.22 GAA is as good as we’ve seen out of its goaltenders in the second season in years.

The Sharks and Penguins are both reliant upon their power play units and their superstars to put the puck in the back of the net.

San Jose’s power play line, with Logan Couture, Joe Pavelski, Brent Burns, Joe Thornton and Patrick Marleau, has put together 17 goals in the postseason to date. Those five men have found the back of the net a total of 34 times out of the 61 goals the Sharks have scored.

Sidney Crosby, Evgeni Malkin and Phil Kessel are the ones doing the damage on the man advantage for the Penguins. Not only do they have 10 PPGs between them, but they’ve also scored 19 goals in the playoffs.

Each team in the Finals has a sniper in defense who can take over a game both with his shot and with his defensive ability. Kris Letang has been more successful on the defensive end of the ice, but he still has 10 points to show for his 18 playoff games. Burns has 20 points for the Sharks and has ripped off 60 shots on goal, most of which have come from the point.

Both teams also have unheralded stars who have come out of nowhere to shine. Joonas Donskoi has turned into a legitimate superstar and a crowd favorite in San Jose with his five goals in the playoffs.

Bryan Rust was completely unheard of before Game 6 of the Eastern Conference Finals. All of a sudden, he’s a household name due to the fact that he scored Pittsburgh’s last three goals against Andrei Vasilevskiy in that series, including both goals in Game 7 for the men in black and gold.

What’s going to ultimately separate these two teams in the 2016 Stanley Cup Finals? In our NHL playoffs predictions, it’ll clearly be the intangibles. Which team will be able to take the other’s crowd out of the equation to steal a game on the road? Which one will make the best coaching adjustments as the series wears on? Which one will find stars to shine outside of its superstars?

All of those questions still beg to be answered before the start of this series on Monday night, and about the only safe bet on the NHL odds is that we’re going to see plenty of twists and turns along the way. However, there may be less surprises compared to the playoffs.

Keep up to date with hockey betting as we cover everything from the NHL playoffs to the Stanley Cup finals. For more odds, check out our hockey betting section.