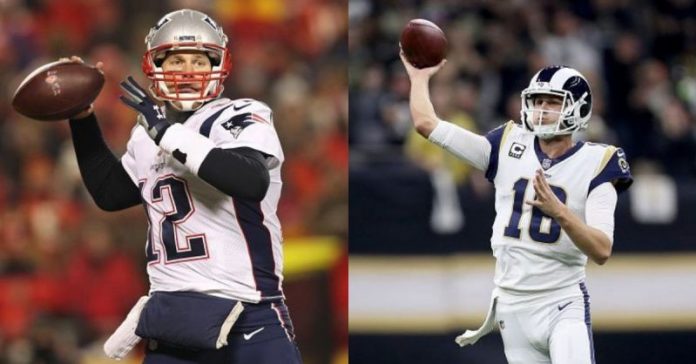 The Super Bowl is drawing near, and there is considerable buzz wondering if the New England Patriots will add another title to their dynasty or if the upstart Los Angeles Rams can knock them off. Much of that fate will come down to the play of the quarterbacks, and the oddsmakers have the betting public in mind when it comes to prop bets involving Tom Brady and Jared Goff.

Brady may be in the twilight of his career but he is still playing at an extremely high level. Goff has become a rising star in the past two years and has helped Los Angeles become one of the most dangerous offenses in football.

Brady is the savvy veteran while this is Goff’s first time on the stage as big as the Super Bowl. That is something to keep in mind when it comes to the quarterback prop bets.

There are several different prop bets to consider when it comes to the quarterbacks in the Super Bowl. One of the main ones asks how many passing yards Brady and Goff will accumulate in the contest. The over/under for Brady is being placed at 291.5 while Goff’s number comes in at 278.5. The best wager among these is the “over” on Goff because if the Rams fall behind in this one he will be forced to throw a lot down the stretch and could surpass the total.

Brady’s completion total over/under is placed at 25.5 and his attempts at 38.5. Those numbers may both be high as he could really slow down in the second half. Additionally, the Rams have a questionable rush defense which could allow New England to stick to the running game if it is working.

Goff’s completion total is placed at 24.5 and his attempts at 36.5. He doesn’t throw as many high-percentage passes as Brady so the “under” on the number of attempts could be the right call here.

There are some fun cross-sport Super Bowl bets. One asks if Goff will have more completions or Kevin Durant more points in the Warriors’ game against the Lakers. Goff is the underdog at +2.5 and that would be a fun one to look into.

Brady is the -141 favorite to throw the first touchdown pass, but that number seems too high. Goff is a better choice at +107 odds. Another wager asks who will throw more touchdown passes in the entire game. Brady is the -132 favorite and that seems like a better bet to choose him. The Rams have a star running back in Todd Gurley who could score once or twice on the ground and hurt Goff’s touchdown total.

Reason: There are plenty of prop bets surrounding the quarterbacks and it makes sense to dive in to many of them. If one stands out, it is the one that asks which quarterback will be the first to 100 yards. Brady is used to the big stage and should come out throwing a lot.

The Rams may want to ease Goff into this game so his nerves settle down. He didn’t start very well against the Saints and could be in a similar situation here. Brady’s odds of reaching 100 yards first are placed at -135 and those are not too steep. He is the right pick and that is the finest quarterback prop bet choice in the Super Bowl.