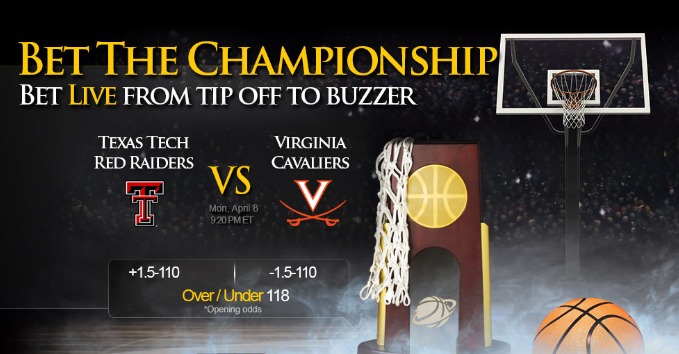 The 2019 NCAA men’s basketball championship game is set, with a defensive battle expected between the Texas Tech Red Raiders and Virginia Cavaliers. While there will be plenty of people focusing on the result of this matchup, there are also plenty of NCAA championship game props beyond the spread and the moneyline.

This game caps off March Madness and there are plenty of wagers available because it is such a big-time matchup. There are some Championship game prop bets that stand out among the rest.

The game is expected to be a good one, as Virginia has been labeled as the 1.5-point favorite. The scoring total is extremely low as it has been listed at 118 points, which is the smallest for a title game in 20 years. Virginia comes in as the -130 favorite while Texas Tech is +110 as a slight underdog.

RED RAIDERS ARE RIDING TO THE NATTY!

Scoring total for either of the teams

The prop bets allow gamblers to choose a scoring total for either of the teams. It makes sense to take the “over” on the side that seems most likely to win, because some late-game free throws can be the difference. Virginia comes in at 59.5 points and the “over” could be the more popular pick. Texas Tech’s total is listed at 58.5 points. The first-half totals are low, with Virginia’s points coming in at 27 and Texas Tech’s at 26.5.

The largest lead of the game

One of the championship prop bets asks what the largest lead of the game will be. The oddsmakers are expecting a super competitive game, as the over/under is listed at a margin of only 11.5 points. The teams would really have to stick close to each other the whole way for the “under” to hit.

Who will hit the first three-point field goal

An interesting prop bet asks who will hit the first three-point field goal in this game. Virginia guard Kyle Guy has the best odds at +350. He is averaging more than 15 points per game and is shooting 42.5 percent from three-point range, so it’s clear why he is the favorite. Texas Tech’s Jarrett Culver is tied for second at +400 odds alongside Virginia’s Ty Jerome.

Which player will score the first point of the game

There is another prop bet in which a bettor will get a nice payout by choosing which player will score the first point of the game. Culver is the clear go-to guy for Texas Tech, and he is tied for the favorite at +400 alongside Jerome. Virginia’s DeAndre Hunter comes in at +500, followed by Texas Tech’s Matt Mooney at +550. An underdog bet on Texas Tech’s Tariq Owens is an intriguing one. He‘s not a huge scorer but one early bucket could mean a payout at +1000 odds.

The best championship prop bet asks how many total points will be scored in this game, with a range of five different points to nail the totals. Every choice is an underdog pick because it’s a small margin to hit, but with such good defense this is an intriguing wager. The prop bet that gives the total between 121-125 points can be had at +750 odds, and that is the best bet.