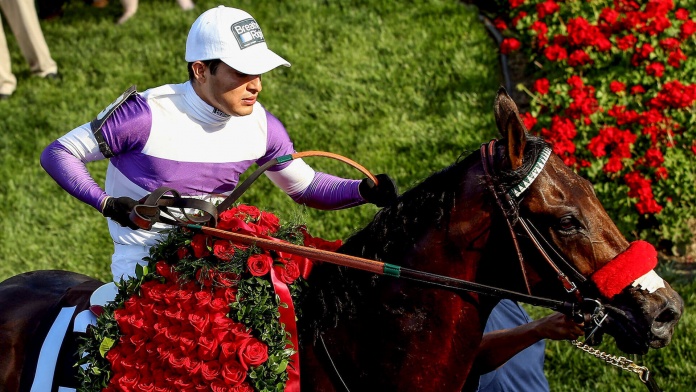 Let the chaos in the Sport of Kings commence. Nyquist, who closed as one of the biggest favorites in the Kentucky Derby in recent memory, finished off the first leg of the Triple Crown in style, winning by 1 1/4 lengths at Churchill Downs on Saturday.

But now comes the ultimate question: Can Nyquist pull off the same feat as American Pharoah and be the Triple Crown winner for all three legs? BookMaker.eu has posted Triple Crown odds of +350 for Nyquist to pull off the feat.

History will tell you that Triple Crown winners come in bunches. There is, of course, no rhyme or reason as to when the special horses come around, but it should be noted that Seattle Slew and Affirmed posted back-to-back Triple Crowns in 1977 and 1978. Why can’t American Pharoah and Nyquist pull off the double as well?

The one thing that we learned on Saturday at Churchill Downs is that Nyquist is definitively the best three-year old horse in the world today. He was positioned perfectly by his jockey, Mario Gutierrez, and he showed the sign of a true champion when he finished the job against the hard-charging Exaggerator in the final few strides.

One could argue that, at 1 1/2 miles, Exaggerator would’ve won that race going away, but we’ll wait to discuss that after the Preakness Stakes in two weeks. Just because a jockey gives his horse a good ride doesn’t mean that success is sure to come from it. Heck, Kent Desormeaux did everything he wanted with Exaggerator and just didn’t have enough to ever get up to the lead.

Nyquist was never bothered by the fast pace at the Derby. The first quarter of a mile was run at a blistering pace of 22 and 2, and most probably would’ve imagined with Nyquist staying right on the pace set by Danzing Candy that he was in a lot of trouble. The half mile in 45 and 3 was incredibly quick as well.

Still, Nyquist was able to stick in there every step of the way and ultimately turn in the fastest Kentucky Derby time since Funny Cide won this race in 2003. He looked every bit as strong in the last quarter mile as he did in the first, running both at around 25 seconds.

We’ll have to see who decides to run up against Nyquist in the Preakness Stakes in two weeks, but we can’t imagine Danzing Candy will be amongst them. In a crop of three-year olds that really didn’t have a lot of great speed balls in it, that’s one less problem Nyquist will have to deal with.

Nyquist really isn’t a frontrunner by nature either, but Gutierrez shouldn’t have a problem running him there, especially knowing that he really wanted to keep his colt out of big time traffic and had to run him harder in the first quarter mile than he probably would’ve liked.

Our gut is that the fields at both the Preakness and the Belmont are going to be relatively small. Getting ready for the summer races might be the thing most of the favorites from the Kentucky Derby do, and if that turns out to be the case, this horse betting price of +350 is going to be a steal on Nyquist to win the Triple Crown.

It’s worth remembering that, no matter how good a horse looks on Derby Day, there’s still a ton of racing to get through in order to win that coveted Triple Crown. There’s a reason that we went almost 40 years between Triple Crown winners, and just because Nyquist is the best three-year old racer this year doesn’t mean he has what it takes to win both the Preakness and the Belmont as well.

We do know one thing, though. He’s the only one with a shot at glory, and there isn’t another horse in the bunch who we’d rather be backing in horse racing bets to win the whole enchilada than Nyquist.