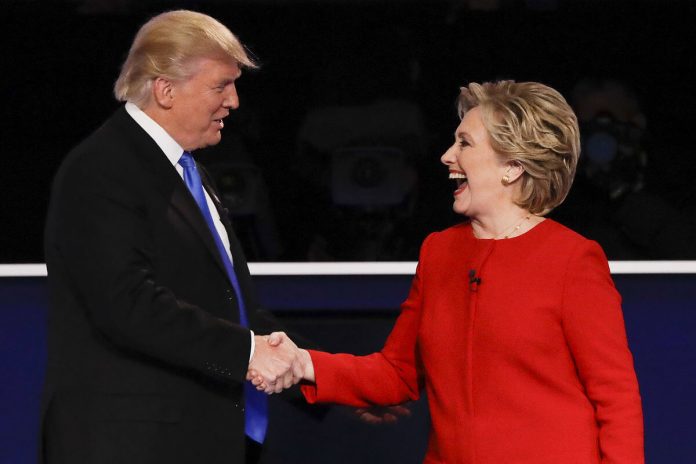 The first presidential debates have been conducted, and despite Donald Trump’s insinuations and constant retweets, Hillary Clinton was thought by many to have won the debate.

Clinton didn’t look comfortable in the beginning, but looked better as the night went on and seemed far more presidential than Trump did. The big question now is whether or not the polls will reflect her superior performance in the days to come. How are the updated Hillary Clinton odds and Donald Trump odds looking?

(Odds courtesy of BookMaker.eu as of September 29)

This debate came at the perfect time for Clinton. Her lead over Trump had shrunk to its lowest point yet and most signs pointed toward the race being a dead heat. The prevalent thought that she could win by a landslide a few months ago had faded to the point that she was just concerned about winning the election. Now, she’s ahead again in the Election 2016 odds.

If there was a weak spot for Clinton in the debate, it’s that her pre-planned zinger lines fell flat. Twice she tried to use the phrase “Trumped up, trickle-down economics”, a line that was no doubt expected to be greeted with applause, but instead it fell on deaf ears. There were other instances of this happening during the debate, but that line was painfully awkward.

However, Trump looked far worse than she did during the debate. Trump petulantly interjected when Clinton said something he didn’t agree with and his mixture of childish behavior and arrogance didn’t endear him to many undecided voters.

On top of that, Trump constantly seemed on the defensive, especially after moderator Lester Holt made it clear that he was going to call Trump on his lies. Trump continues to deny that he was for the Iraq War even after audio from the Howard Stern Show has come out that proves he did indeed say that.

Debate Performance Did Trump No Favors With Minority Voters

Not only that, Trump also responded poorly when it came to answering a question about the relations between minorities and police. Trump started off his answer rather eloquently, but then suggested that stop-and-frisk was a reasonable practice and that he would try to implement it if elected president.

That answer led to Holt stating that stop-and-frisk was declared unconstitutional because it was found to have largely singled out minorities.

Trump also made a lot of dubious claims and assertions. He claimed that he was smart for not paying taxes, asserted that Clinton should be blamed for everything that has gone wrong lately, and that he shouldn’t release his tax returns since he is still in the process of a routine audit.

These statements may further ingratiate him with his base, but it’s hard to imagine that they help him win over any middle-ground, undecided voters.

2016 Predictions and the Next Presidential Debate

The next presidential debate of the 2016 election is slated for October 9, and will be moderated by Anderson Cooper. The debate will take a different shape this time around, in the form of a town hall where voters will get to directly participate with candidates by asking them questions.

In addition to that, for the first time ever, viewers at home will get to choose questions for the candidates to answer. It will be extremely interesting to see how this new wrinkle plays out.

What do you need to know about polls and political odds? Check out Trump vs Hillary Odds: An Honest Look at Poll Numbers