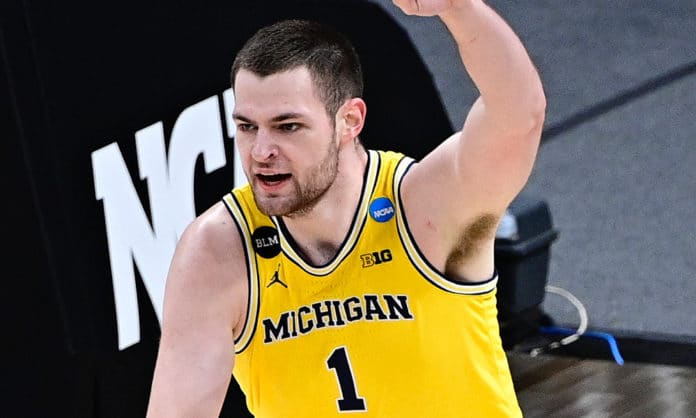 There is plenty of history on the side of the UCLA Bruins when it comes to the NCAA Tournament. Unfortunately John Wooden isn’t here to lead the way. It hasn’t mattered this season for the Bruins, who started their run to the Elite Eight with a win in the First Four. They can become only the second team to play in both the Fours if they can overcome No. 1 seed Michigan Wolverines on Tuesday. UM has avoided the pitfalls of other higher seeds romping to the fourth round by an average of 14 points. Michigan hit the board as a 7-point favorite, which is the lowest spread of any Elite Eight matchup.

This NCAA Tournament Elite Eight matchup will air live on TBS at 9:57 p.m. ET on Tuesday, March 30, 2021 from Lucas Oil Stadium in Indianapolis, IN.

There were some who doubted the Bruins’ inclusion in the Tournament. They lost their last three regular season games to finish 17-8 and were upset by Oregon State in the first round of the Pac-12 tournament. Losers of four straight games while going 1-3 ATS entering the dance, not many were giving them a chance. They turned things around in the second half of the First Four matchup with Michigan State overcoming an 11-point halftime deficit to force overtime. The Bruins held MSU to just three points in the extra session to emerge with the 86-80 outright win as a 2.5-point dog. UCLA then put down BYU, Abilene Christian and Alabama in overtime in the Sweet 16 to get here going 4-0 ATS. Playing an additional game as well as two overtime contests could leave the Bruins running on fumes.

The Wolverines aren’t a surprise any longer. Over looked at the start of the season, UM rolled to wins in its first 11 games and was 18-1 before a late season slump caught up with them. They lost two of their final three regular season games and were ousted by Ohio State in the Big Ten tournament leaving them at 2-3 SU and ATS in five games before the NCAA Tournament. Still, they received a No. 1 seed in the region and have looked inspired getting to the Elite Eight. They absolutely dominated Florida State in the Sweet 16 using their size and precision to romp 76-58 getting the payout as a 1.5-point favorite. Overall, Michigan is 23-4 SU and 19-8 ATS. They hold opponents to a little over 65 points per game allowing the UNDER to go 16-11.

They don’t have a lot of size, which could be troublesome against UM’s massive frontcourt. But the Bruins have made up for it in energy and intensity. Jalen Hill, who stands 6-10 and is the only big presence on the team, hasn’t played since early February. And the Bruins also lost last year’s leading scorer Chris Hill to a knee injury in late December. “We lost two key guys and had to reinvent ourselves defensively,” Mick Cronin said. It’s a good thing they had some time at the end of the season to work out the kinks because things have worked out quite well in the Tournament.

The Bruins could have caved in their matchup with Sparty. Falling behind by as many as 14 points, they flipped the switch thanks to fewer turnovers and improved defense, according to Cronin. The ability to score the basketball has always been there. Johnny Juzang is averaging 20 points in the Tournament despite fouling out after netting 13 points against Alabama.

If the Wolverines play as well as they did against Florida State they’ll be cutting down the nets in a few weeks. It’s a standard they’ve maintained throughout a season that’s seen them win 24 of 27 games so far. UM dominated inside outscoring the Noles 50-28 in the paint, and that was against a team that has size. The Bruins don’t have the size to matchup against the likes of Hunter Dickinson, Franz Wagner and Austin Davis. Dickenson scored 14 points and Wagner added 13 and 10 boards against FSU. Davis hit all three shots off the bench for six points.

UM has been able to overcome the loss of second leading scoring Isaiah Livers thanks to the play of the frontcourt. Chaundee Brown has supplied a spark off the bench scoring 12 points in the most recent win. The Wolverines don’t hurt themselves and they play unselfish ball. They had 19 assists and just nine turnovers against FSU while rattling opponents on the other end. They held the Noles to their lowest point total of the season in the 76-58 payout.

As much as I like what the Bruins have accomplished during the Tournament, I think their good fortune is about to run out. They’ve played one more game and two of their matchups went extra time, including Sunday’s win over Alabama. That and having to deal with Michigan’s imposing front court players will be their undoing. The Wolverines have looked good all season so I’m sticking with them minus the points on Tuesday.