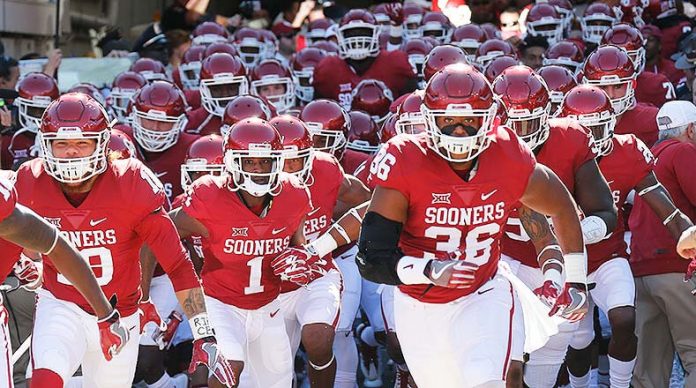 Who needs Baker Mayfield? Certainly not the Oklahoma Sooners as they derailed the Lane Train last week, demolishing Florida Atlantic, 63-14, behind an offense that was just as efficient without the Heisman Trophy winner and No. 1 overall pick. OU put on a clinic that Chip Kelly would be proud of. Unfortunately, the originator of the up-tempo, spread offense has watched the entire college football world catch up, and he’s left with a team that doesn’t have the horses to run it.

Kelly’s debut with the UCLA Bruins was a failure on the stat sheet and on the scoreboard, and now he faces the No. 6 ranked team in the country in a big Week 2 challenge. The Bruins barely got over the 300 total yard mark in a 26-17 loss to Cincinnati, but his freshmen starters got that initial game out of the way, and hopefully they’ll be better prepared to face the fury that’s ahead.

UCLA Bruins at No. 6 Oklahoma Sooners

I guess Kelly and the Bruins could use Mayfield right now. Kelly’s return to the Pac-12 was a failure on the scoreboard with a loss to underdog Cincinnati, but it was a success in that he got his youthful roster a game under their collective belts. While some might expect and hope for a quick turnaround, the Bruins simply aren’t ready to achieve it. A number of underclassmen started last week’s game and the roster is loaded with freshmen. The key is to develop, grow, and get better as the season progresses.

First-year quarterback Dorian Thompson-Robinson could be making his debut as a starter in Norman after Michigan transfer Wilton Speight was injured last week. Thompson-Robinson has the skill set that Kelly craved during his successful run at Oregon and he has a cannon for an arm. He played like a freshman last week, though, going 15 of 25 for 117 yards after taking over. UCLA will have added depth this week with half of the six suspended players returning to the team.

According to ESPN’s playoff predictor, no team improved its chances more than Oklahoma in Week 1. The Sooners went from a 23 percent chance before the season to 45 percent after blowing out FAU. Kyler Murray made OU fans quickly forget about Mayfield with an electric performance. Making his second start since transferring from Texas AM, Murray hit 9 of 11 passes for 209 yards and two scores in less than half of action, helping the Sooners amass 650 yards of offense.

While the offense was playing keep-away, OU’s defense and special teams also added to the rout. Long a concern in the yard-churning, point-scoring Big 12, the Sooners smothered an FAU team that averaged over 40 points and nearly 500 yards per game to lead Conference USA last season. The Owls didn’t get their first points until late in the third quarter and managed only 324 total yards. OU also blocked a punt that resulted in a score.

UCLA had a tough time slowing down Cincy’s ground game last week and now they have to contend with the thoroughbreds in Oklahoma’s backfield, ouch. The Bruins were weak against the run last season and they showed zero signs of improvement in the opener. Michael Warren danced around defenders for 142 yards and added three scores and the Bearcats nearly hit the 200-yard mark.

Oklahoma’s line is terrific and the holes last week were gaping. Three players ran for at least 38 yards with Rodney Anderson topping the group at 100 – on five carries! He was barely touched on a 65-yard TD scamper and the Sooners compiled 316 rushing yards averaging a blistering 8.1 yards per carry. The Bruins will be aided by the return of linemen Osa Odighizuwa and Moses Robinson-Carr, but that won’t be nearly enough.

The line climbed to OU -30 for this one, which is something the Bruins haven’t seen in seven years. Ironically, the last time UCLA was an underdog of at least 30 points was against Kelly’s Oregon Ducks, and they covered. Kelly will mold the Bruins into his team, but it’s going to take time and probably some painful losses. OU looked every bit the championship team last week and they have an abundance of talent.

The question was at QB and who takes over after Mayfield logged ridiculous numbers. That was answered last week. The Sooners will run and they will beat UCLA, the only question is how badly. The Bruins are just too young and inexperienced and this one could get out of hand quickly. Look for OU to cover the enormous spread and cash the over.

UCLA at Oklahoma ATS Pick: Oklahoma -30 and the Over at BookMaker.eu