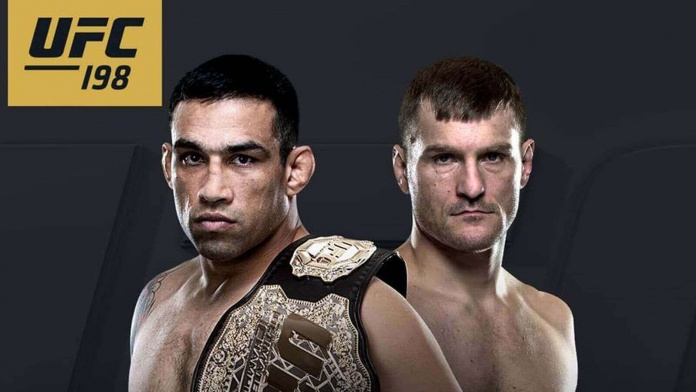 As UFC gets closer to its milestone event for UFC 200, the Pay-Per-View cards continue to get bigger and bigger.

UFC 198 began conceptually as a standard UFC Fight Night card, which would have been on network television, but as the promoters continued to put together big name after big name to fill this card, the UFC 198 odds grew bigger too, and the demand to make it a PPV was seemingly inevitable.

Just one look at this card, and you can tell what a fantastic night it’s going to be in the octagon. So many of these fighters have headlined UFC events before, and many of these brawls could headline a UFC Fight Night event if need be.

Justino, better known as “Cyborg”, is going to be making her UFC debut here against Leslie Smith in a catchweight fight. Justino figures to immediately work her way up the women’s ladder in UFC, and she should immediately be setup for a run at the belt involving a suddenly competitive bantamweight division.

Let’s not forget that Ronda Rousey is now almost a bit of an afterthought in fight odds, with Miesha Tate, Holly Holm and Cat Zingano also in the division. This fight against Smith shouldn’t be a huge challenge, but it’s still a big debut for a fighter who UFC has been trying to land for years.

Silva isn’t the headliner he used to be at 41 years old, but he can still put on a real show. He was involved in the fight of the night in a five-round brawl with Micahel Bisping just a couple months ago, and he’s going to get Hall here in a fight which could set either one up for another run at the middleweight championship.

Silva is the slight favorite, but this is a real chance for Hall to make a big jump in this division.

Rua is another one of these fighters taking a step backwards with losses to some of the top fighters in the light heavyweight division, but he can still dominate in the ring.

He hasn’t fought since beating Antonio Rogerio Nogueira in August 2015, but you can bet he’ll have the crowd on his side in this major bout against Anderson, a man who ranks No. 12 on the light heavyweight ladder. Rua as a dog at +170 might make for a fantastic play.

Demian Maia has been on a roll of late. He’s scored four straight victories, the last two of which have been similar fights to the one of this magnitude against Neil Magny and Gunnar Nelson. Maia has really impressed with Performance of the Night twice in that span, and that’s why he’s a big UFC favorite fighting against Brown, a man falling down the welterweight rankings in a hurry.

Souza and Belfort rank No. 2 and No. 3 on the middleweight ladder, and the winner of this fight could get a shot against Luke Rockhold in the very near future. Souza had won eight fights in a row before losing to Yoel Romero in his last fight in a controversial split decision.

The loss could’ve knocked him down the middleweight ladder quite a bit, but he’ll immediately get a shot at redemption against Belfort, a 39-year old who had a shot at the middleweight belt last year at this time and came up short against then-champ Chris Weidman. Still, Souza is the up-and-coming fighter here, and he’s clearly a deserving favorite.

This is a big time fight that could easily go the full five-round distance. Werdum is perceived to be one of the best pound-for-pound fighters in the world right now, especially after he submitted Cain Velasquez in his last fight to unify the UFC Heavyweight Championship. This is a huge opportunity for Miocic, but we’re afraid he’s in just a bit over his head.

He’s a power fighter by nature, and though he’s never been submitted in his career, he’s not going to have the speed advantage in this fight for sure. Werdum is the favorite by a relatively healthy margin, but nothing would be surprising in what should be an excellent title fight.

The Arena da Baixada in Curitiba, Brazil will be the home for UFC 198. Catch all the action on Saturday, May 14, 2016 on Pay-Per-View.

Keep up with what’s to come at the major UFC 200: Jon Jones Massive Favorite in UFC 200 Odds in Rematch with Daniel Cormier