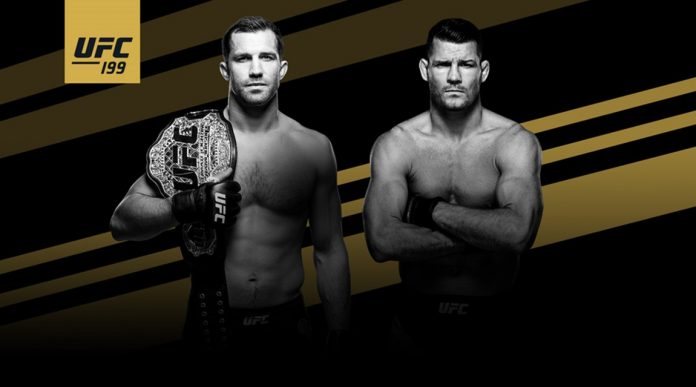 This Saturday’s UFC 199 fight card in Los Angeles has the unfortunate distinction of being the final pay-per-view event before the landmark UFC 200 weekend. But don’t be fooled: it’s a great card with two titles on the line.

Although we won’t see Chris Weidman try to get his belt back in the headliner, Michael Bisping will finally get a title shot after toiling for years as a top contender.

The card also features two living legends trying to regain past glory in Dan Henderson and B.J. Penn, a featherweight wunderkind in Max Holloway, and a bantamweight championship match between archrivals Dominick Cruz and Urijah Faber. What are the latest UFC 199 odds? Let’s make a few quick picks and UFC predictions:

We’ve seen this movie before. In 2014, Rockhold carved up Bisping on the feet and put him away with a guillotine in the second. And he made it look pretty easy. He showed complete disdain for the Brit’s striking, and Rockhold’s speed and power on the feet made a perennial contender look outclassed.

While Bisping’s first-ever title shot is a nice story, I don’t think anything changes the fight odds in their second go-round. Rockhold has only gotten better since then, while the 37-year old Bisping is largely the same fighter.

At 37, Urijah Faber might need to change his nickname from “The California Kid” to “The California Man.” It’s clear his best days are behind. It’s not like he’s completely shot, but he’s just a step slower and a smidge weaker. That’s not a good sign for his matchup with Dominick Cruz, who he failed to beat even when he was in his prime.

Expect Cruz to run circles around Faber en route to a convincing win. The champ has mastered a style that nobody has been able to figure out, and Faber is going to be plenty frustrated chasing him around.

Holloway is just 24 years old and already a top-4 fighter in a stacked division. The scary thing is that he’s getting better, improving a superb, fully-rounded MMA skillset. Lamas is a tough, strong clinch fighter who’s rightfully a top-10 guy at 145, but we have to put him a tier below Holloway, who belongs up there with Conor McGregor, Jose Aldo and Frankie Edgar.

There is an interesting case for Lamas here, as his clinch-based style is perfect for neutralizing active fighters like Holloway. Still, I’d side with Holloway’s dynamic offense in the UFC betting odds.

Please don’t do it, Hendo. Don’t step into the ring at 45 years old to face serial killer Hector Lombard. You’re too slow, your wrestling is gone and all you’ve got is your right hand against a terrifying athlete whose knockout reel is downright scary. Lombard can beat you pretty much any way he wants, from knocking you around to ragdolling you with his Olympic judo.

B.J. Penn didn’t even make it to his first comeback fight. The Hall of Famer was removed from his scheduled bout with Cole Miller after admitting to the use of an IV, which was recently banned by USADA. While it’s not as PEDs, the fact that many fighters use IVs to flush out enhancers does not make Penn look good. Especially since he was using so far out from the fight.

It seems like Penn will fight at some point in the future, but now he has to wait out a possible ban. It’s not looking good for The Prodigy, who has diminished his legacy with this debacle.

Poirier is on a nice little three-fight run since his return to the lightweight division, but now he’s facing a very good striker that can also neutralize his wrestling. We’ve seen Poirier in prolonged firefights before, and it usually doesn’t end well. Especially against explosive, athletic types like Bobby Green.

UFC 199 takes place on Saturday, June 4, 2016 at The Forum in Inglewood, California. The main card will be televised on pay-per-view starting 10 p.m. ET following the prelims on FS1.