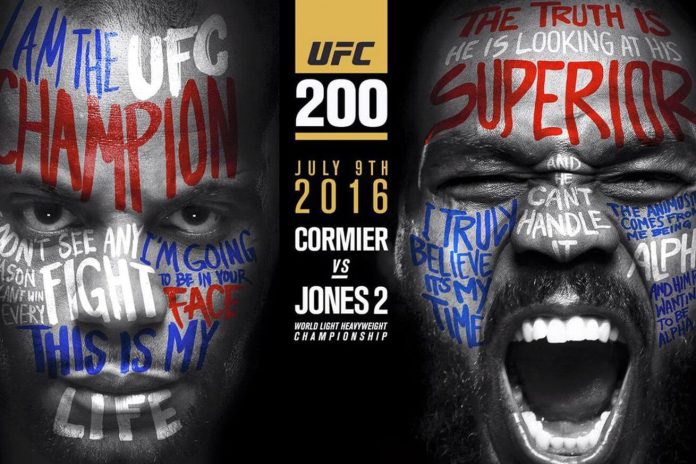 Despite a disappointing performance against an overmatched Ovince St. Preux at UFC 197, Jon Jones opened as a 3-to-1 favorite for his second go-round in the UFC 200 odds with rival and current champion Daniel Cormier.

UFC president Dana White recently announced on Good Morning America that the pair will headline the milestone UFC 200 card on July 9. The UFC odds at BookMaker.eu have Jones at -300, with Cormier at +220. In their first encounter, UFC 182 in January 2015, then-champion Jones closed at -179 with “DC” at +185.

Jones Not Impressive at UFC 197

At UFC 197, Cormier joined commentators Joe Rogan and Mike Goldberg ringside for the play-by-play, literally getting a front row seat and a microphone to break down his future opponent. While they heaped praise on “Bones” – who dominated from bell to bell – there was a sense that they were expecting even more from the all-time great.

“…if [Jones] showed up in the form he did tonight…there’s no way that guy can beat me.”

Cormier confirmed this on the FOX Sports 1 post-fight show: “He got the job done. A lot of times, most guys, they don’t have their best performance, they lose…so it shows how special Jon Jones is. That being said…I do believe that if he showed up in the form he did tonight or if this is the new Jon Jones, there’s no way that guy can beat me.”

Jon Jones’ Odds Should Have Been Tempered

Obviously, DC was among the many who expected Jones to steamroll St. Preux. Now he’s reveling in his “lackluster” performance. But slow your roll, champ – this was Bones’ first fight in 15 months. And while he wasn’t injured, the guy dealt with some insane issues during that time.

First, he had to battle legal issues stemming from a hit-and-run accident where he broke a pregnant woman’s arm. Then he had to basically admit to the world that he was a drug addict and needed help. While the media was busy writing “tsk-tsk” and “Jones’ Biggest Enemy is Himself” articles, his most hated rival won the belt that was stripped from him.

When St. Preux was tabbed as Cormier’s injury replacement for UFC 197, the new bout was seen as a tune-up.

It’s easy to see why expectations were so high, but in hindsight, they should have been tempered. It’s like we were expecting Jones to Tiger Uppercut a perennial top-10 fighter into the bleachers in the opening minute.

Is This the New Jon Jones?

Don’t be fooled – oddsmakers sure aren’t. Let’s not forget that Jones is still just 28 years old and squarely in his athletic prime. He’s still the guy that’s never lost, leaving a trail of elite fighters crumpled in his wake in compiling the most impressive resume in UFC history. That includes a win over Daniel Cormier.

It’s hard to argue against the consensus belief in UFC betting that he’s already the greatest fighter we’ve ever seen inside the octagon. Against OSP, Bones’ signature creativity was still there. We saw the spinning attacks, the side kicks to the legs, the slashing elbows from the clinch.

His power hasn’t gone anywhere – he scooped up the former college linebacker and powerslammed him like it was Monday Night Raw. And he still has that 84.5-inch reach that nobody has an answer for.

How did fans miss the mark on Jones at UFC 197? Recap the odds in UFC 197: Jones vs Saint Preux