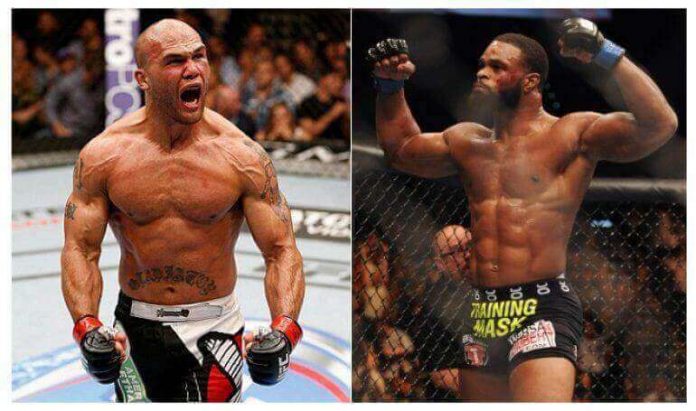 UFC welterweight champion Robbie Lawler is a man of few words, many punches and an uncanny ability to produce thrilling bouts. In late 2015, Lawler and Rory MacDonald engaged in a bloody, unforgettable brawl that was the unanimous winner for Fight of the Year. Then in January 2016, he put forth the early favorite for the award with a brutal battle against Carlos Condit.

Can Lawler manufacture another instant classic for the third straight time? This Saturday, the UFC’s most exciting titleholder will defend his strap against the most athletic challenger yet, Tyron Woodley.

The pair is set to headline a night of action in Atlanta that also includes a rumble between brawlers Matt Brown and Jake Ellenberger, and a contender bout between hyperactive strawweights Rose Namajunas and Karolina Kowalkiewicz.

Let’s break down our UFC predictions and your betting options for the night’s three biggest fights. All UFC 201 odds courtesy of BookMaker.eu.

Lawler is one of the best sprawl-and-brawl guys in the sport, shrugging of takedowns and forcing opponents to deal with his lethal punches. Woodley is an explosive athlete with a decorated NCAA wrestling background and lightning-quick combinations. It’s likely much of this fight will take place on the feet, as Woodley has come to favor his standup in recent bouts.

Woodley’s athleticism and quickness is something that Lawler hasn’t dealt with in his run as a champ. But nobody is better than Lawler at turning a bout into a bloody trench war. To quote Boromir, one does not simply walk into a cage with “Ruthless” and emerge with all his facial features intact.

Woodley at +193 is a compelling bet. Lawler’s habit of pulling last-minute comebacks after getting put into a blender has to be the most unsustainable fighting styles in the sport. I’ve long maintained that the top six welterweights can all beat each other on any given day. Woodley has the speed to land and evade counters, and it’s very plausible he’ll outpoint Lawler.

As for the over/under, the over on 2.5 rounds at -150 seems like the way to go. Lawler is supremely durable, and Woodley’s athleticism should keep him out of trouble until later into the fight.

Here’s a case of a striker vs. striker matchup being an intriguing clash of styles. Brown is volume fighter whose sole desire is to feed opponents a never-ending stream of punches, kicks, elbows and knees until they quick. Ellenberger is a power puncher who’s all about landing bombs.

Both men have been finding wins hard to come by recently. The fact that their losses have come against elite welterweights show that they’re no longer title contenders at 170 pounds. But they are still valuable commodities, residing squarely in a tier right below the highest echelon.

Ellenberger is the younger fighter, but he has not aged as well as Brown. While Jake has built a reputation for brutal knockouts, it’s actually been years since he’s laid anyone out with punches. Even more disturbingly, he’s been tuned up on a few occasions in recent bouts. Brown is more durable, has better cardio and his pressure is going to give Ellenberger a ton of problems.

Because Brown is pretty expensive at -280, you’ll want to parlay him to win with another bet to maximize your payout. The best value to bet on this fight is the over on 1.5 rounds at +110. While I do think Brown will score a TKO, it usually takes a while for the damage he dishes to accumulate to the point of a stoppage.

Just watching these women fight might tire you out. Namajunas and Kowalkiewicz are two hyperactive fighters that set out to exact a pace that opponents cannot match. Kowalkiewicz is undefeated thus far, but she has yet to face a true contender at 115 pounds. That changes against Namajunas, who is the No. 3 ranked fighter in the division.

Namajunas has always had a ton of raw talent, but she’s apparently started to turn the corner when it comes to harnessing it into polished technique. Her long, lanky frame allows her to pick apart opponents with her rapidly evolving Muay Thai, and she’s basically a Tasmanian devil in the clinch and grappling phases of MMA.

Namajunas to win is smart play at -250. Kowalkiewicz is a game opponent, but she’s not ready to face off against the best in the division just yet. The over on 2.5 rounds at -210 is also a good bet, as both women are durable and skilled enough to make it to the final bell.

Who are you backing in the UFC 201 fight odds? For the latest UFC betting odds and news, follow BigOnSports’ UFC betting page