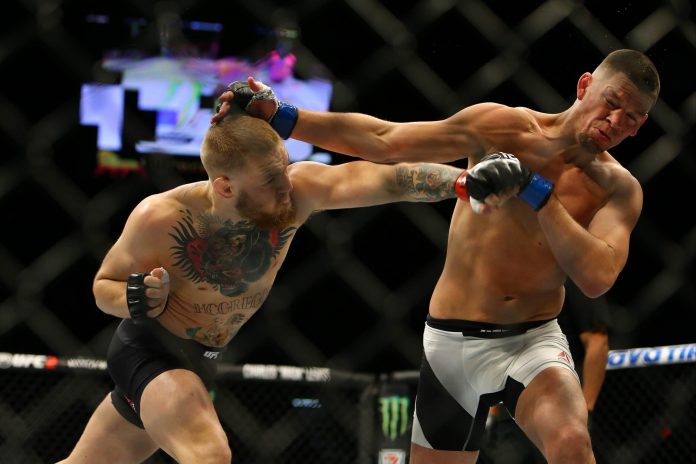 After a civil war between the UFC and its biggest superstar and a difficult negotiation process between the promotion and its most mercurial star, Conor McGregor vs. Nate Diaz II is finally official.

In what projects to be the biggest fight in the sport’s history, the pair will meet in August as the headlining act of UFC 202 in Las Vegas. Major sportsbooks have already opened with McGregor as the favorite in their UFC 202 odds.

McGregor is a slight favorite, and it would take a $130 bet to win $100. A potential winning $100 bet on Diaz would double your money and net you a $100. In their first encounter, McGregor closed as nearly a 6-1 favorite, with a money line hovering near -600.

For the Diaz-McGregor rematch, over/under is set at 2.5 rounds, which splits the five-rounder down the middle. The under is the chalk at -130, with the over at +100. Although their first encounter ended in less than two rounds, McGregor should be better prepared to fight at 170 this time and pace himself.

At McGregor’s insistence, the fight will take place at 170. And what “Notorious” wants, he gets – he makes too much money for the UFC to do otherwise. Despite the fact that both men are more natural lightweights, it’s a pride thing for the Irishman:

Should McGregor Be the Favorite in These Fight Odds?

Maybe it shouldn’t be surprising that McGregor opened as a slight favorite – he has legions of fans that are willing to roll the dice on him. But from a fight perspective, really? Diaz beat him in two rounds, and he was taking tequila shots on a houseboat 11 days before the fight. What do you think will happen with a full training camp?

I get that McGregor was lighting up Diaz in the first round. He’s not letting us forget it either, reminding us that he was winning the fight. But this is MMA, the fight complexion can change with a single well-placed combination, takedown, flurry…there are too many variables to name in Connor McGregor’s odds.

What’s more, Diaz proved to be a terrible matchup in general for the featherweight champ. McGregor’s game is based on his explosive punching power – the one-punch KO of Jose Aldo in 13 seconds is the perfect example of this. TKOs of contenders like Chad Mendes and Dustin Poirier are further evidence that McGregor possesses special power.

But that power did not translate against a bigger man. And both Nick and Nate Diaz possess near supernatural ability to take punches, recover and keep coming. McGregor stated after the fight that he was surprised that Nate ate punches that normally felled the featherweights that he had been fighting.

On top that, Diaz exposed a huge flaw in McGregor’s game: grappling. As good a boxer as Nate is – he regularly trains with Andre Ward – he’s an even better jiu-jitsu artist. When the fight hit the ground, it took less than 15 seconds for Nate to set up a textbook rear-naked choke that ended the bout. There’s just no way that McGregor can up his grappling to defend against a Gracie black belt with just one camp.

Diaz holds almost every advantage in this bout. Physically, he’s taller, longer and has unmatched cardio – dude runs triathlons for fun. On the feet, his boxing is superior to McGregor’s. And you can’t even compare their grappling games.

While this fight is already close to a pick’em, if you were going to bet Diaz it’s better to jump early. I’d expect savvy gamblers to jump all over his status as the underdog and quickly swing him into favorite territory.

Editor’s Note: Get a free $10 bet courtesy of Bookmaker.eu when you open a new account and make a bet on the fights. No deposit is necessary.