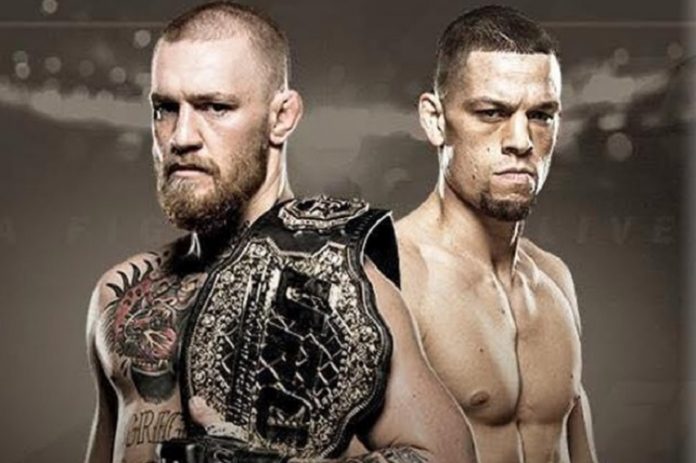 Savvy UFC gamblers don’t just look at the next card to bet on fights – they need to be looking at a sportsbook’s entire offerings to pounce on favorable odds before the action swings the odds out of their favor. Without any major events this week, now’s a good time to take a look at a few intriguing underdogs.

Let’s take a look at a few good ‘dogs that frankly should not be underdogs. None of these guys will net you a crazy payout like Holm, Tate or even Michael Bisping against Luke Rockhold, but you’ll double your money and then some with a winning bet.

Editor’s Note: Get a free $10 bet courtesy of Bookmaker.eu when you open a new account and make a bet on the fights. No deposit is necessary.

Here’s the perfect example of how oddsmakers need to set UFC betting lines that account for volume betting on a certain fighter. In a vacuum, most MMA experts would probably pick Diaz to win.

The Stockton native already beat McGregor on 11 days notice and holds several key physical and skill advantages. But the Irishman has legions of loyal followers who will blindly bet on him to win – enough to force oddsmakers to make him the favorite in most cases.

You’ve probably heard that Conor has brought in specific boxers that match Nate’s lanky frame and style. And how coach John Kavanagh – who, on an unrelated note, seems to be enjoying the limelight a little too much these days – is prepping his fighter with military-style training unlike any of his other training camps. On top of all that, “Notorious” is being smart about fighting at 170 pounds, which he was unaccustomed to in his first scrap with Nate.

But let’s be real. At press conferences, Nate looks like he’s two weight classes above Conor. Diaz has been boxing with world-class boxers like Andre Ward for years, and Conor can’t even sniff Nate’s BJJ right now. Not all jiu-jitsu black belts are created equal, and Nate’s Renzo Gracie black belt is in a whole different stratosphere than your local dojo. And when it comes to cardio, the Diaz brothers are in a league of their own.

I’m not saying that Diaz is gonna truck McGregor. But he’s got more to work with, and he’s somehow a UFC betting underdog.

We all know what to expect from Demian Maia. The Brazilian is going to drag the fight to the ground and carry out his usual impersonation of human clingwrap. From there, he’ll somehow find a limb and it tie into a knot that would make an Eagle Scout proud. Opponents know what’s coming, yet they can’t stop it.

Like John Fitch and Jake Shields in their primes, Maia is the quintessential grinder. But the Brazilian takes it a step further. If there was a poll among UFC fighters on who possesses the best jiu-jitsu, there’s no way that Maia wouldn’t be in the top three. He combines the masterful top control and positioning of Fitch and Shields with one of the most dangerous submission games in UFC history.

Condit has historically had problems with strong wrestlers in the past, with three of his four past losses coming against wrestling-heavy approaches exacted by GSP, Johny Hendricks and Tyron Woodley. We all love Condit’s violent, high-volume offense, but he needs space to get off. There’s a good chance Maia suffocates him for the majority of the fight.

“Cowboy” proved that he could hang with a bigger man, dominating a true welterweight in Patrick Cote at UFC Fight Night 89. Now he’s got another question to answer: how will Cerrone fare against an even bigger bigger man – one that won’t oblige him in a kickboxing match?

Rick Story is a pressure fighter who is at his best when he can be the bully. He is superb when he can plant opponents into the fence and mug them with dirty boxing, knees and headfighting. Against the smaller Cerrone, Story shouldn’t have any problem doing just that. And because this is a three-round fight, Story only needs to do it for two rounds to take the win.

Because of his popularity, flashy wins and impressive resume, Cerrone is understandably the favorite in the fight odds. Plus, he looked fantastic against a resurgent Cote. But this isn’t going to be sparring match against a slower fighter. This is going to be an ugly trench war, and that’s a whole different…Story.

At +145, a winning bet on Story pays out nearly 1½ times what you put in. If Story can muscle around guys like Gunnar Nelson and Tarec Saffiedine, he should be able to do so against Cowboy.