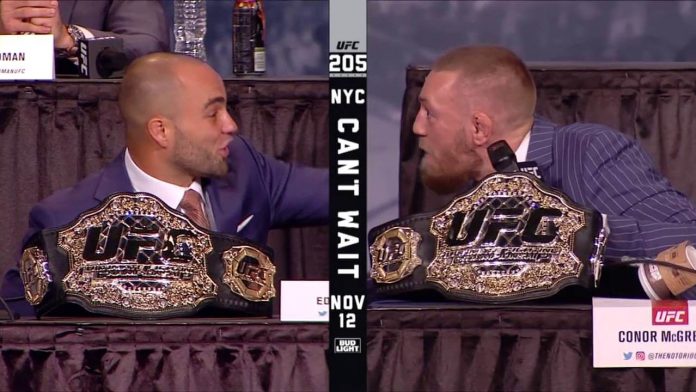 The last tentpole card in 2016 is over a month away, but UFC 205 odds are already up for many of the card’s biggest fights. The promotion isn’t holding back in its first trip to the legendary Madison Square Garden in New York, and that means you’ll have a longer betting frame than usual.

Now’s the time to lock in your bets before the UFC betting public has the opportunity to swing the lines out of your favor.

We’ll get into detailed fight breakdowns during Fight Week, but for now let’s just get hyped about the awesome bets on fights you can make right now.

Check out last week’s preview for a complete breakdown. Currently, Connor McGregor odds are fluctuating between -140 and -150, while Alvarez is hovering around +120 to +130. I’d expect the Irishman’s line to trend in the more expensive direction in the coming weeks.

If I was in charge of finding fighters for a real life version of the Bloodsport, you can be damn sure that Stephen “Wonderboy” Thompson would get a golden ticket to the tournament. No need for an audition – his one-round destruction of former champion Johny Hendricks is all you need to see.

The former pro kickboxer whoops ass in exactly the same way you’d envision yourself defending your girlfriend from drunken thugs at a bar: with a ton of flashy kicks that pack a megaton of hurt.

His last two wins against Hendricks and two-time title challenger Rory MacDonald were so dominant that Thompson is the favorite against champion Tyron Woodley. But let’s not forget that T-Wood is probably the most explosive welterweight on the UFC roster – the dude just slept the infamously durable Robbie Lawler with a single punch to win the strap.

Let’s stick with the Bloodsport theme, but now plan the sequel. Bloodsport II: Bad Bitches would star UFC strawweight champion Joanna Jedrzejczyk as the final boss. She’s fast become the confident, smirking bully of the 115-pound division. Armed with violent, masterful Muay Thai skills that might be the best in the UFC, Joanna Champion has literally rearranged the faces of every woman she has fought thus far inside the octagon.

Challenging her is fellow Polish striker Karolina Kowalkiewicz, who at times seems too sweet to be a professional cagefighter. Many people are expecting her utter destruction at the hands of the UFC women’s champ, and I’m inclined to agree.

How does a two-time NCAA All-American wrestler stack up against former silver medalist in Olympic wrestling? We’ll find out when former champion Chris Weidman meets Cuba’s Yoel Romero. What’s more, the winner of this matchup could have an inside track at a title shot.

Fun fact: Romero is probably one of the most hated fighters in the UFC, due to his public bashing of the U.S. marriage equality act and for testing positive for performance enhancers. Weidman’s nickname is “The All-American.” Think the UFC record for “U-S-A” gets broken here, with ease.

Ever wonder how a certified U.S. Special Forces badass would perform in the cage? Tim Kennedy has been answering that question for years. This is a guy that joined the elite Special Forces in 2004, and was simultaneously competing in MMA while serving as a Green Beret. If you can think of a better guy to be trapped with during the zombie apocalypse, I’m all ears.

It’s been nearly two years since we’ve seen Kennedy inside the octagon, but he’ll welcome former light heavyweight champion Rashad Evans to the middleweight division. The winner gets instant entry into the division’s top 10.

Let’s just take a moment of silence for what could’ve been. “Cowboy” Cerrone was originally slated to fight Robbie Lawler in an announcement that gave the bloodthirsty MMA community a collective fight boner at the same time. But alas, the UFC gods deemed us unworthy of such awesomeness, afflicting Lawler with an injury and replacing him with Gastelum.

There’s nothing wrong with this new matchup. It’s fine, really. But compared to the bloodbath that was promised to us, it’s a serious bummer.