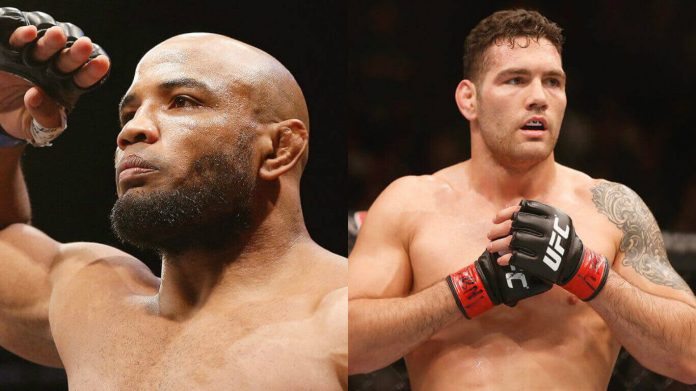 Fighting in New York City at Madison Square Garden has been a long time coming for Long Island native Chris Weidman. He’s been one of the most vocal supporters of bringing MMA to New York, and the UFC has granted him a prime spot in the promotion’s first event in the big apple. But man, he is not getting an easy homecoming by any means.

The former middleweight champion meets Cuba’s Yoel Romero, who will fight for the first time since serving a six month suspension for tainted supplements.

Hardest Fight To Predict on the Main Card

Romero is one of those guys who just looks so jacked that his positive test was more of a “well, duh” reaction than anything. The problem for Weidman is that he fights every bit like the hulk he looks like. Romero, smash. Romero, win.

Weidman vs. Romero is the hardest fight to predict on the main card. Both men match up well, which makes for some difficult betting choices. But let’s take a look at your options, courtesy of the UFC odds at BookMaker.eu.

Since opening as a -170 UFC betting favorite in late September, Weidman has fluctuated slightly upward, settling in at his current -165 value. Romero has largely remained steady at +140, though he did down to +135 for a day or so a few weeks ago.

It appears that you can safely assume that both men’s lines will stay where put. Of course, betting surges are common the 24 hours before fight night, so if you like a particular money line, you should probably jump on it now.

The over/under at 1.5 rounds is a bit surprising, considering that it’s the lowest round total possible for any fight. It’s not much time, but it still splits this three-rounder down the middle. The under is more than a 2-1 favorite at -210, so oddsmakers are obviously expecting an early finish.

The Case for Romero

Though the Cuban is already 39 years old, he is relatively new to MMA. Just 12 fights into his MMA career, Romero has less miles on his body than fighters years younger. Still, one has to wonder how much longer he can fight at elite levels as he enters his 40s.

But assuming he won’t drop off physically in this fight and he is largely the same guy as he was before his PEDs suspension (a big if), Romero is a powerful wrestle-boxer with 9 KOs in 11 victories. Among the guys he’s knocked out? Tim Kennedy, Lyoto Machida, Brad Tavares and Derek Brunson. Some of those dudes are probably still wondering what the hell hit them.

Much of Romero’s success stems from his elite wrestling background, as he earned medals from the World Championships all the way to the Olympics. And he wouldn’t have won that hardware if he wasn’t ridiculously strong. This is a man who can easily ragdoll 205-pounders, and his strength and balance makes him impossible to take down. Nobody is going to be pressing him into the cage for long.

On the feet, Souza’s boxing is evolving, though he tends to rely more on single power shots than more technical combinations. Luckily for him, he is so explosive that it only takes one hit for his opponent to go down. And if he commits to wrestling, his ground and pound from the top is like an avalanche – but with boulders instead of snow.

The Case for Weidman

Like Romero, “The All-American” is a wrestler first. Just in case you were wondering, his nickname comes from his NCAA D-1 credentials, as he was a decorated collegiate wrestler. Weidman’s early success came with a takedown, top-heavy approach, but he’s transformed into an all-around threat training at Serra Longo. Even at age 32, it seems as he can get better – and this is a former champion.

On the feet, Weidman’s punches hurt opponents even when it looks like he’s not putting his full weight behind them. The left hook that left Anderson Silva cold and changed the legend’s career was a simple lead punch. Perhaps the best aspect of his boxing is his cage control. Nobody is better at backing up opponents and cutting off the octagon. You will never see Weidman chasing anyone.

When it comes to wrestling, Weidman rarely forces the issue. Instead, he’ll shoot for reactive takedowns or attempt a snatch single leg at the end of a combination. He has a very straight forward approach while on top, methodically looking to pass, but he also has a high level jiu-jitsu game that lets him threaten with submissions in nearly any position.

Both men are evenly matched, and it’s highly doubtful that either will be able to get the other to the mat consistently. That means a lot of this fight will be contested on the feet. Though Romero is the more explosive puncher, Weidman has the finer grasp of all-around boxing technique.

What’s more, Romero has had trouble staying fresh in three-round fights, while Weidman has gone to the championship rounds twice. I wouldn’t be surprised if The All-American flips the switch and round two and turn up the pace in an effort to attack Romero’s cardio.

Still, we have to take into account that Weidman has yet to fight this year because of injuries. Is he the same fighter that tore through the 185-pound class to win the belt?

Honestly, this is a toss-up in MMA betting. But I’d lean towards Weidman for two reasons. One, Romero can be lackadaisical at times, and judges tend to favor the more aggressive fighter. Two, Weidman is simply the better conditioned athlete, and Romero noticeably fades. Either man is a dicey play, but Weidman isn’t horribly expensive at -165.

I’d stay away from the over/under entirely. While this projects to go well past 1.5 rounds because they like to wrestle, both men are legitimate knockout threats.

For more on UFC 205, check out UFC 205 Odds: Prelims Previews and Picks