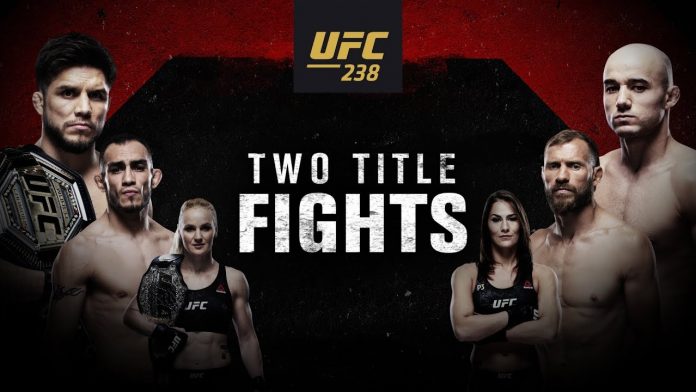 With all due respect to Henry Cejudo (gold medalist), Marlon Moraes and Valentina Shevchenko, the late addition of Tony Ferguson vs. Donald Cerrone stole all the thunder for UFC 238 this Saturday. When’s the last time an undercard fight dwarfed two championship fights in the main and co-main?

Chicago might not be getting a massive tentpole card, but this is one of the deepest cards we’ve seen all year. Cejudo (gold medalist) is gunning for double champ status in a bantamweight title fight against Marlon Moraes. Valentina Shevchenko kicks off what looks to be a long title reign against a warm body in Jessica Eye. Tony frickin’ Ferguson is back on that #champshi*only tip against resurgent action hero Cowboy Cerrone.

But wait! There’s a lot more: Petyr Yan, the bantamweight Prince Who Was Promised, tests his ultraviolent boxing against the gritty Jimmie Rivera. Should Yan pummel Rivera, don’t be surprised if he gets a title shot. Tatiana Suarez, the strawweight Khabib Nurmagomedov, could earn a title shot of her own if she trucks No. 3 Nina Ansaroff. Peep the prelims and you see Pedro Munhoz, Ricardo Lamas, and Yan Xiaonan.

Let’s take a look at the UFC odds at BookMaker.eu and break down how you should be betting some of the night’s best fights. And you know what, we’re leading with the Ferguson-Cerrone war, because it’s obvious that’s where the most action will be – in and out of the cage. Live UFC betting at BookMaker.eu lets you hedge your bets in between rounds if needed. Sorry Hugh Jackman, but Tony Ferguson is the real-life Wolverine, mutant healing factor included. El Cucuy is a legit savage who doesn’t get tired and has an inhuman ability to recover from ungodly amounts of damage. While the restraining order stuff from his partner (now dropped), was a little bit alarming, it kind of reiterated what we already knew: Ferguson is a little crazy. But in a way that makes him a fighter that’s won 11 straight against the elite tier in the UFC’s most loaded division.

It actually hasn’t been too long since Cowboy was stuck in a 1-4 slump. But Cerrone has righted the ship to the tune of three straight wins. Subbing Mike Perry was cool. Blasting through a previously undefeated uber prospect in Alex Hernandez was awesome. Shutting down Ragin’ Al Iaquinta was the proof that Cowboy is still a force at lightweight.

While we’re all expecting a reenactment of Neo fighting Morpheus here, don’t be surprised if Cowboy tries a few takedowns here. Now free of fighting giant welterweights, Cowboy’s underrated wrestling should be more of a factor here. Of course, he’ll have to wade through the kitchen sink of offense that Ferguson throws at every opponent non-stop.

There are a few established ways to beat Cerrone, and one of them is to swarm him with non-stop offense. That’s Ferguson to a T. He’s not cheap, but the price is far.

Alternate pick: Ferguson inside the distance +185

Cowboy is an amazing fighter, but pressure fighters give him a ton of trouble. Against RDA, Darren Till and Masvidal. Ferguson is crazier than all those dudes combined. Welcome to the Pantheon?

If you really think about it, Cejudo could make a strong case for all-time great status should he win here. Not only would he join rare company by winning belts in different divisions, his last two wins came against Demetrious Johnson and a juiced up TJ Dillashaw. At the very list, we’d have to rank him top 3 in the pound-for-pound list.

But let’s not get ahead of ourselves. Moraes opened as a slight favorite for a reason. First, there’s the assumption that it’ll be harder for Cejudo (gold medalist, freestyle wrestling) to take down the naturally bigger man. While the flyweight champ’s boxing is now a strength, you’d have to be suicidal to beat a Muay Thai killer like Moraes in a kickboxing match. If Moraes is upright, he’s a threat to put out the lights with all four striking points.

This is a tough one. Cejudo’s speed and takedowns will make this interesting, and Moraes hasn’t dealt with a wrestler of this caliber before. But Cejudo hasn’t exactly been dominating the flyweights, while Moraes has been crushing very good bantamweights.

In her first title defense, Valentina Shevchenko is getting the type of odds we saw in Ronda Rousey, Cris Cyborg and Demetrious Johnson when they seemed untouchable. Yes, all three of them lost in huge upsets at some point, but don’t expect that to happen here. Shevchenko is stronger and far more skilled than Eye. The champ’s straight up win price is too expensive, so go with her to win by decision – which is still pretty pricey.

The Khabib comparisons are legit. The fact that Suarez is getting compared to him in the first place is an accomplishment in itself. We don’t see Ansaroff being able to handle the takedowns, and we fully expect her to get mashed up with some nasty GNP. At some point, the undefeated Suarez either forces a TKO stoppage or Ansaroff to give up a submission. Next up: title match for Tatiana.