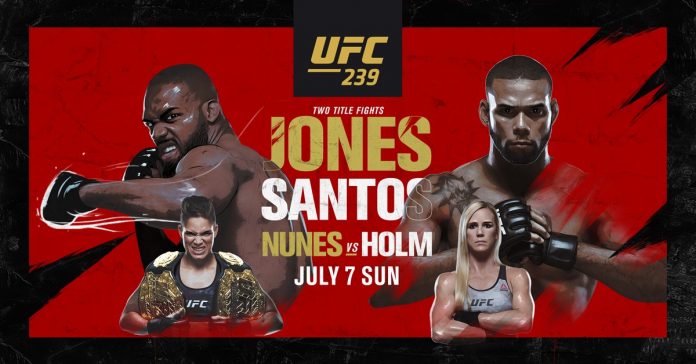 The main event between Jones and Thiago Santos makes up for the fact that the champ never fought Rumble. We’ve always wondered how Jones would fare against an ultra-aggressive brawler – will “Marreta” be the guy who finally test his chin? We’ve seen Bones’ face some big hitters before, but nobody has ever try to swarm him.

You can argue that Nunes isn’t the women’s GOAT, but she’s the first women’s double champ in UFC history, and she stopped Cyborg’s terrifying reign by going knocking her out in brawl. To put that in context, that’s like challenging Steph Curry to a three point contest and winning. Yet it’s her opponent, Holly Holm, that’s the biggest star in the upper weight classes. Nunes has made a habit of demolishing big names, so Holm could be in trouble here.

Dana White’s worst nightmare would be giving Ben Askren a title shot. That could happen if the 19-0 welterweight champ runs through Jorge Masvidal. We can go ahead and give this a grudge match classification as dudes have been trash talking ever since Askren beat Lawler (Jorge’s teammate) in controversial fashion.

Finally, we’ve got to mention Luke Rockhold. The former middleweight champ makes his 205-pound debut, and he’s getting thrown right into the fire against No. 6 Jan Blachowicz. The Polish fighter might not be known to casuals, but he’s definitely respected at light heavyweight. How Rockhold does against him will tell us a lot about his title aspirations.

We’ve got a lot to cover here, so let’s jump right into it. In each fight, we’re showing you the best prices we could find across the major online sportsbooks for UFC odds. Live UFC betting is available at sites like BookMaker.eu to hedge your bets between round. 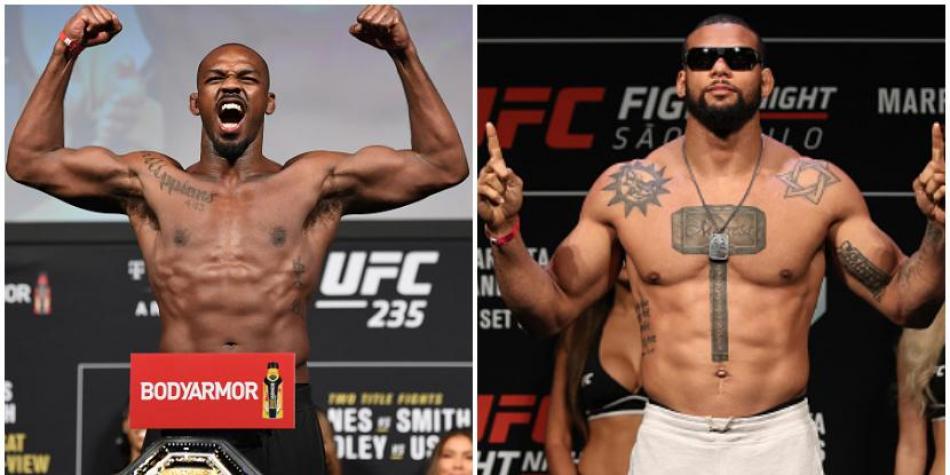 Hmmmm: Jones to win by submission +185

When it comes to medieval weapon chest tattoos, Santos is the GOAT – Thor’s hammer across his chest puts Brock Lesnar’s weird sword tattoo to shame. But when it comes to the combination of physical talent and MMA skill, Jones has no peer. While it’s going to be a lot of fun watching Santos try to obliterate the champ with his leg kicks, it’s gonna be hell trying to get into range to pull that off. You should feel confident enough about this pick to parlay it – the talent gap between the two is that massive. It won’t be a huge lift, but it’s better than nothing.

Even if Jones runs into trouble on the feet, he can always fall back on his wrestling. Santos’ takedown and submission defense has improved, but he’s still a few levels below the champ in that regard. Jones has a talent for finding unorthodox chokes and locks with his arms, and it’s easy to see him notching a tap if he blasts Santos or gets into prolonged grappling exchanges. At this price, a small hail mary bet could pay off. 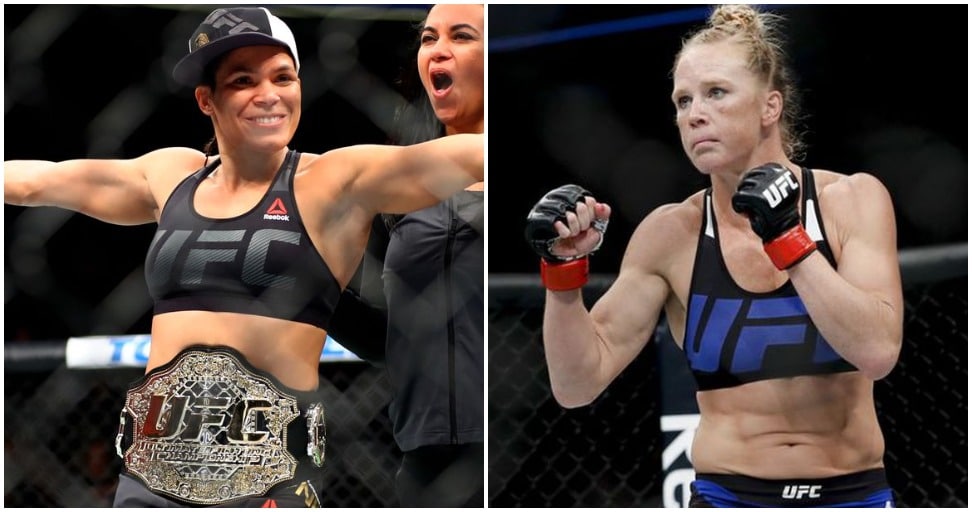 Our pick: Fight goes to decision +135

Holly Holm might benefit more from her starpower than anyone else in the UFC. Case in point: she’s 1-3 in her last four bantamweight fights, but she gets a title shot because she beat newcomer Megan Anderson in a featherweight fight. It’s good to be a draw in two thin division. But let’s not overlook Holm – this is the type of matchup that Nunes has trouble with.

The champ does her best work against aggressive opponents who charge into her range. We saw against Valentina Shevchenko that disciplined strikers with good conditioning are much more difficult to manage. Still, Nunes’ athleticism and power should be enough to win most of the exchanges against Holm. But because her line is a bit too pricey, we recommend going playing the decision bet. Holm has never been knocked out, despite going 25 minutes against Cris Cyborg.

We’d also look at Holm as a live ‘dog here. Her coaches at Jackson-Wink are some of the best gameplanners in the business, and she’s got the tools and size to frustrate Nunes. It’s definitely possible she steals enough rounds to take the win. 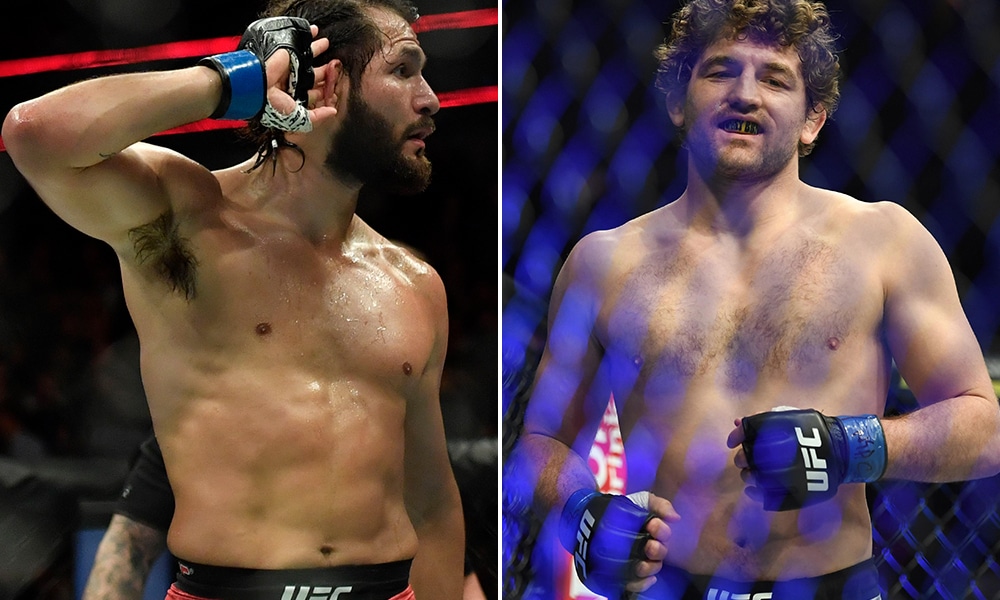 Masvidal is definitely a live ‘dog – it’s easy to train for a one-dimensional wrestler like Askren. If he can stay on the feet, the ATT product has a huge striking advantage. Unfortunately, we saw Demian Maia repeatedly take him down and keep him glued to the mat. While the Brazilian wasn’t able to do much from the top, we should note that Askren is a much more skilled wrestler.

The price on Askren is fair, but if you want to push you luck you might look at him to win by decision. Masvidal might have pulled off some slick knockouts, but he’s not a one-hitter quitter. He is, however, exceedingly touch and savvy. The most likely scenario here is that Askren ends up controlling him on the ground for 15 minutes. 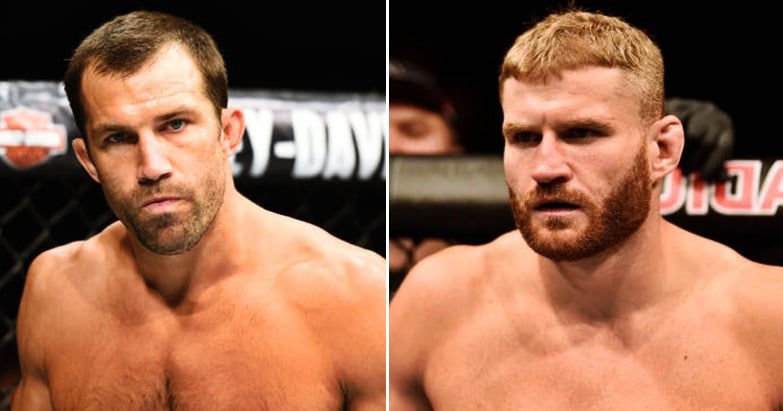 Rockhold hasn’t been active, and he’s been knocked out in two of his last three fights. Sure, he had an awesome run leading up to his title clinch, but he’s only fought once a year since 2016. At 34, is he still an elite fighter? He talks a big game, but his inactivity and injuries are causes for concern. Plus, moving up a weight class is always a risky move.

Blachowicz isn’t flashy, but he’s highly technical and knows how to win the points battle. More importantly, he’s big enough that Rockhold can’t bully him around. On the feet, he held his own against the explosive Jared Cannonier, and is generally a bit more consistent in getting his hits in. Rockhold is certainly more dangerous as a finisher, but we wouldn’t be surprised to see him fall behind on points and losing a close decision.