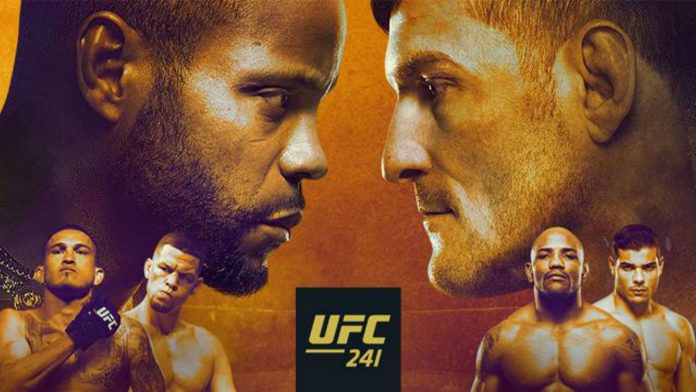 This Saturday’s UFC 241 might have a heavyweight title fight as it’s headliner, but one could argue that it might not even be the most buzzed about scrap in Los Angeles. That’s pretty crazy considering that Daniel Cormier is a two-weight champ and an all-time great meeting Stipe Miocic – who holds the UFC record for most heavyweight title defenses – in a rematch of the two best big men on the planet.

That’s what happens when Nate freakin’ Diaz decides to come out of the shadows three years after a pair of Conor McGregor fights made him a bona fide superstar. He’s been living off that Red Panty Night money ever since, partying it up in Vegas and investing in weed businesses. One of the most magnetic figures in the UFC, the Stockton native’s presence makes any card seem bigger.

Plus, Diaz is scrapping with Anthony “Showtime” Pettis, who is coming off a vintage “Showtime” performance against “Wonderboy” Thompson. The pair have been circling each other for years, and you can smell the bad blood brewing between them. Pettis even came out and said that they always seemed to butt heads when they ran into each other, and vocally relished the opportunity to cause Diaz physical harm.

But even that might not be the most-buzzed about fight. Yoel Romero is stepping into the cage with Paulo Henrique Costa in a high-stakes collision of the two most muscle-bound figures in the UFC. Neither guy speaks very good English, but all you need to market this fight is have them stand next to each other shirtless. When you’re jacked beyond belief – like both these guys are – not many words are needed. The best part of this matchup is that both guys win by straight up hammering their opponents.

That is an amazing trio of fights, with some sweet betting opportunities. Let’s take a look at the UFC odds at BookMaker.eu and break down your best plays. Live UFC betting at BookMaker.eu lets you hedge your bets between rounds as needed. 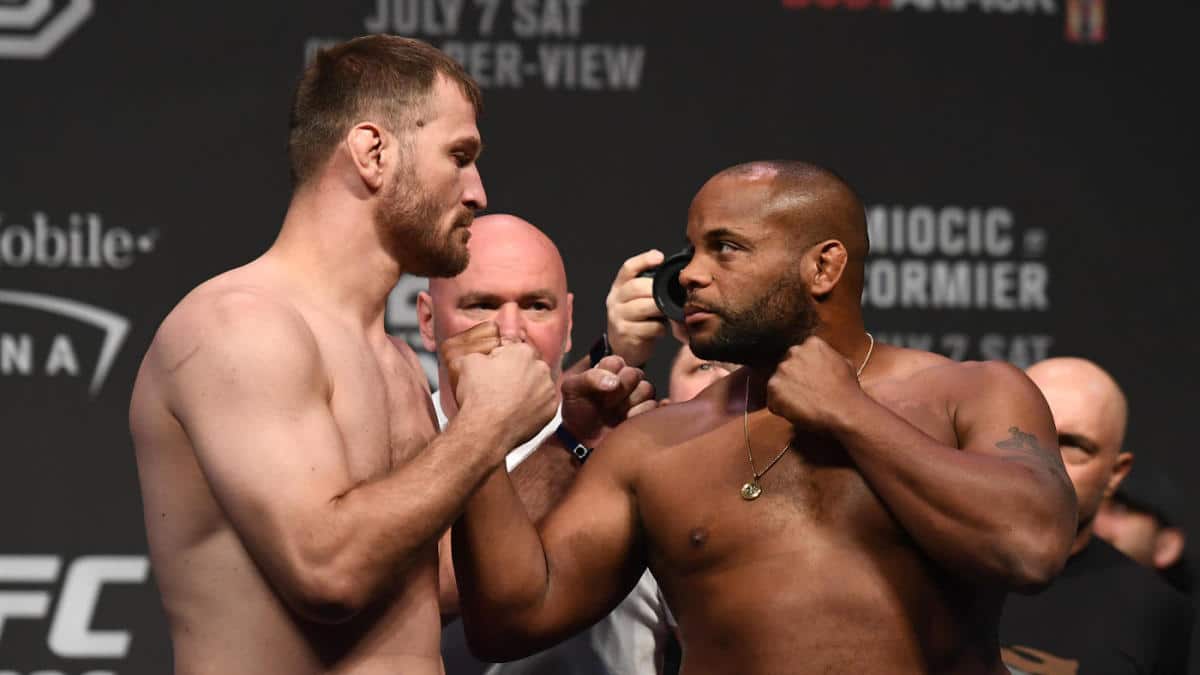 The Safe Pick: Fight doesn’t go to decision at -365

It’s a pricey prop, but you can play this as a parlay booster. Five of Miocic’s past six fights have ended in the first round, and he’s turned into one of the more consistent finishers at heavyweight. Cormier has 15 finishes in 22 career victories, and his last five have ended before going to the scorecards. Even though the champ is a grinder, his constant pressure ends fights early.

The Straight Up Winner: Cormier to win at -140

It’s easy to overlook DC: he’s 40, barely 5’11” and has major dad bod. Put him next to a shirtless Francis Ngannou and any filthy casual would wonder how the hell he’s the heavyweight champ. But don’t let that fool you: in 24 career fights, he has only lost to all-time great Jon Jones. That’s a run that includes wins over Rumble Johnson, Alexander Gustafsson, Derrick Lewis, prime Josh Barnett and TRT Bigfoot Silva.

Miocic is a dangerous guy for sure, and he’s got the benefit of knowing what to expect – DC can’t catch him by surprise anymore. But we’re done doubting the champ. Even if he’s not big enough to take down the challenger, he can fall back on his clinch uppercuts and underrated boxing. His ability to will his way to victory can’t be understated, against anyone not named Jon Jones. 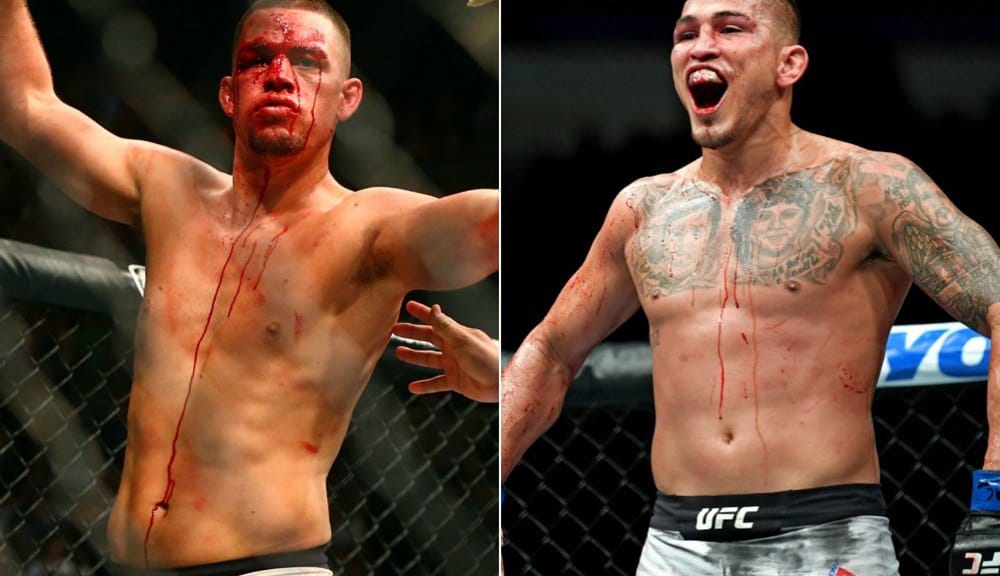 Until Diaz learns to check leg kicks, we really find it hard to have any faith in him – it’s that much of an issue. While Pettis isn’t really known for chopping the lead leg, you’d have to think that the man who produced the ninja-like Showtime kick to the face has the ability to target the knee and thigh. It’s the main adjustment that Conor McGregor made against Diaz, and it made a massive difference.

On top of that, how serious is Diaz about fighting? He hasn’t fought in 2016, and on top of the ring rust he’s been doing tons of partying. While he’s not old at 34, it’s not exactly an age where you live your best fist-pumping life outside of the cage and perform at the highest level inside of it. Maybe Jon Jones can, but Diaz doesn’t have the same generational blessings.

Pettis isn’t a young phenom anymore, but he’s morphed into a grittier version of himself – one that isn’t afraid to get into a nuclear trench war and far less reliant and flashy finishes. Getting into a brawl with Diaz isn’t smart, but this new Pettis can survive one and has the tools to outwork his opponent. 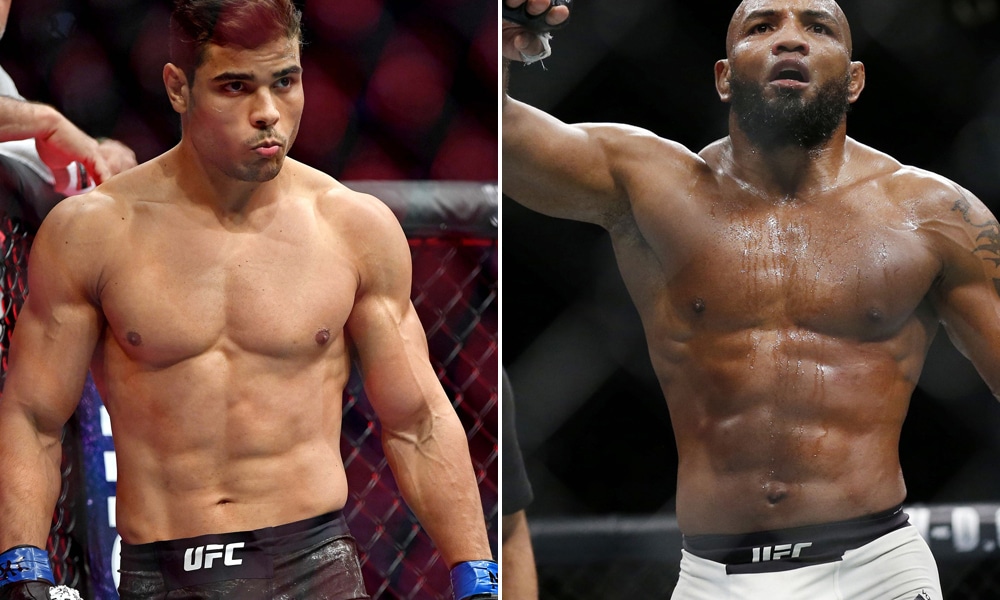 This is super obvious, but you won’t win much with this bet – even as a parlay booster. Both guys are simply too destructive for this to go 15 minutes. In fact, Costa has never even seen a third round in 12 career fights.

The Riskier Pick: Over 1.5 rounds

If you’re looking for underdog odds, this is probably your best bet. Despite Romero’s penchant for authoring violent finishes, he tends to wait for the perfect moment – which for some reason usually comes in the third round – six of his knockouts have come in this time frame. There’s a good chance he tries to wait out Costa’s incoming storm and triggers his nuclear explosion after the over/under mark.

We really don’t know how Romero will respond to a brawler who charges at him: nobody’s ever tried to do that. What we do know that despite his questionable cardio, he’s got the ability and experience to go three hard rounds – something that Costa hasn’t proven yet. Plus, Romero’s Olympic-level wrestling could really come into play here, as the Brazilian has never faced a takedown artist on this level.