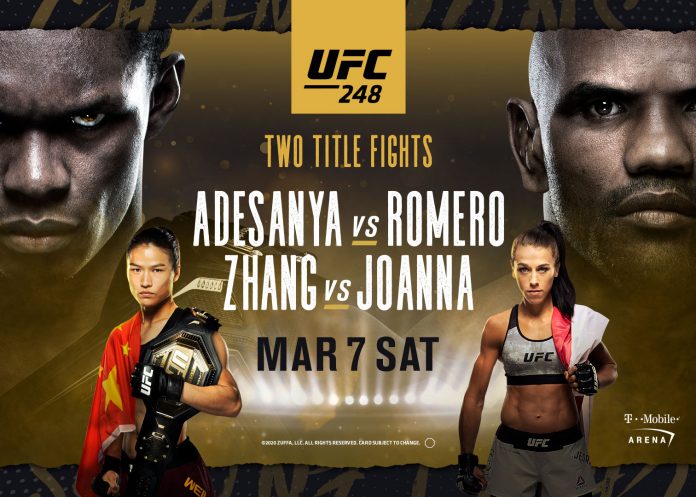 Israel Adesanya isn’t wasting any time trying to achieve greatness. Instead of waiting around for Paulo Costa to heal up, the champion is defending his middleweight title against the hulking Yoel Romero in the main event of this Saturday’s UFC 248.

This is Romero’s fourth UFC title challenge, and he comes into the matchup with two straight losses. But nobody’s really complaining about the pairing: the Cuban is a monster who can beat any middleweight on any given day. He could easily be the champion right now had a few judges scored a few close rounds his way.

Adesanya has the striking style of a prime Anderson Silva, the swag of a musical artist, an A+++ Twitter game and a sick nickname. Most importantly, he’s got the skills: check the 18-0 record with wins over Derek Brunson, Kelvin Gastelum and Robert Whittaker. Just for good measure, he’s styled on some excellent fighters on the way. A few more impressive title fights and Stylebender is a bona fide superstar.

In the co-main event, Zhang Weili, China’s first UFC champion, makes her first defense of the strawweight title. Zhang benefits greatly simply by being a native of the world’s most populous country – if even 1% of the country has an interest in her, that’s a staggering amount of fans. It also helps that she absolutely crushed a tank in Jessica Andrade in a brawl to capture the title.

But can she hold onto the strap in the best women’s division in MMA? How she fares against Joanna Jedrzejczyk will tell us a lot. Joanna is unquestionably the greatest fighter in the class’ short history, and the only two losses of her pro MMA career have come against Rose Namajunas and Valentina Shevchenko. Against everyone else, Joanna has won with ease. Zhang getting past JJ could signal a long title run.

Both the main and co-main are compelling matchups that should be fantastically competitive. Let’s take a look at the UFC odds at BookMaker.eu and break down your best betting options. Live UFC betting is available at the online sportsbook if you want to bet on live line updates. Romero fights the same way every time: probe, probe, unleash holy hell in search of a finish. If he doesn’t get that finish, then start the process over again. The few seconds that he decides to blitz his opponents are truly one of the most violent moments in MMA – it’s truly amazing how powerfully explosive he is at 42. Romero is so reliant on the finish that he will gladly dop rounds in search for the perfect moment to strike.

Don’t expect Romero to use his wrestling – he never has fully relied on it to win fights. So in a kickboxing match, it’s Adesanya that has most of the advantages. Physically, he’s younger, taller and longer. Statistically, he lands at a higher rate, is more dynamic in using all eight points and is endlessly creative. We haven’t seen a middleweight this good at standup since prime Anderson Silva. If you need more proof: check out how he straight up styled on some really good fighters in Derek Brunson and former champion Robert Whittaker.

We just don’t see Romero breaking through Adesanya’s defense. Whittaker and Costa were able to get through some tense fights against the Cuban, and Stylebender is more skilled than either of those guys. The champ’s chin also held up against Gastelum, and he should be able to recover at least once if he gets caught with a nuclear shot. This is his fight to lose.

The UFC odds already have Romero as more than a 2-1 underdog, but maximize your earning potential by taking the victory prop. Romero simply does not win by decision, and doesn’t land enough volume to win in that manner anyway. His habit of dropping rounds usually backs him into a corner where he needs a TKO to win, which is exactly the bet you should be taking if you play Romero. Small Bet: Jedrzejczyk to win at +146

Zhang has proven a lot of doubters wrong, and the scary thing is we still really don’t know what her ceiling is. The fact that she was able to truck through the female version of Blanka is downright scary. At the very least, Zhang might already be the division’s preeminent knockout artist.

The problem for the champ is that this is a matchup that seems to favor Joanna. While the Polish kickboxer struggled against long, athletic fighters in Thug Rose and Shevchenko, Weili is two inches shorter here – and it will make a difference. Also, Jedrzejczyk excels aggressive fighters, stopping them short with snappy jabs and front kicks before they can get into a marchdown rhythm.

There is the possibility that Jedrzecjczyk’s suspect chin gets blown up by Yan – her durability has clearly faded in recent years. But our get feeling is that the Chinese champ doesn’t land anything clean enough to truly test it. At this price, we can get behind a small bet. You might also want to consider Jedrzejczyk to win by decision, as she doesn’t have the power to finish a beast like Zhang.