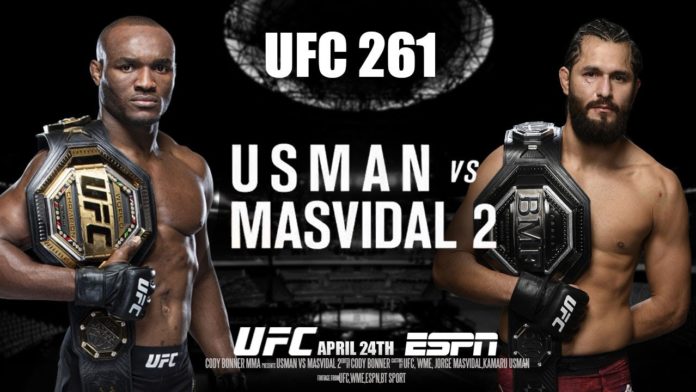 A trio of championship bouts highlights the card at UFC 261: Usman vs. Masvidal 2, taking place Saturday, April 24 at the VyStar Veterans Memorial Arena in Jacksonville, Florida. With an expected full crowd in attendance, the promotion didn’t disappoint putting together a fight card that’s a UFC bettors dream. A welterweight rematch between current champion Kamaru Usman (18-1) and Jorge Masdival (35-14) headlines the 13-fight ticket that includes four additional fights on the main card, including a pair of women’s title bouts.

Just nine months ago Usman successfully defended his title with a unanimous decision over Masvidal on Fight Island in Abu Dhabi. Masvidal was a late addition to the ticket after Usman’s originally scheduled opponent Gilbert Burns had to withdraw due to COVID. Earlier this year Usman successfully defended his title for third time with a third round stoppage of Burns to improve to 13-0 inside the octagon. The champ is a big -450 favorite at BookMaker.eu to retain his strap.

A pair of women’s title fights serve as the lead in with Zhang Weili (21-1) putting her strawweight belt on the line against former champion Rose Namajunas (10-4) in the co-main event. Zhang makes her first appearance since an epic battle with Joanna Jedrzejczyk at UFC 248 in what has been called one of the best fights in UFC history. Zhang emerged with a split decision victory, her 21st straight as a pro. Zhang is a -215 favorite, but fights like her last one could have a lasting impact on her status in the octagon.

Valentina Shevchenko (20-3) is a massive -430 favorite to retain her flyweight title against division newcomer Jessica Andrade (21-8) in the first title fight on the docket. Shevchenko has dominated the division stopping all four contenders since winning the vacant title with a unanimous decision over Jedrzejczyk in late 2018. Former titleholder in the strawweight division, Andrade moved up with a stoppage of Katlyn Chookigian in her first divisional bout. Andrade is looking to become just the second female fighter to hold a strap in two weight classes.

Let’s take a closer look at some of the bouts. Odds for every fight on Saturday’s card are available at BookMaker.eu. Check out the latest when you’re ready to make a wager.

Both fighters have something to prove in this matchup, which will only make it more interesting than it already is. Usman won the first tangle by unanimous decision winning 14 of the 15 rounds scored by the judges. Usman has no weaknesses which is why he’s been so dominant in the weight class. He has yet to lose in the octagon going 13-0 and he has won 17 straight fights overall. Pound for pound he’s probably the best fighter right now.

That hasn’t scared Masvidal, though, and Gamebred feels with proper preparation the outcome will be different than what we saw on Fight Island last August. Taking that fight on a week’s notice and having to shed pounds to make weight, Masvidal claimed he didn’t have the proper amount of time to get ready. There are no excuses now and Usman is ready to prove why he’s the best while shutting up Masvidal for good. The first fight saw Gamebred run out of gas in the later rounds. It was an accomplishment to go the distance, but the outcome was never in doubt after a relatively close first round.

Usman has won in a variety of ways. He has the stamina to go the distance, can punch with the best of them and his wrestling background gives him an edge on the mat. There is reason to believe Masvidal can win this fight and it’ll probably be closer than most expect, but Usman is just better in every area and he has added motivation on his side.

Zhang is a beast and with a win on Saturday can join the ranks of best strawweight in UFC history. Her violent altercation with Jedrzejczyk at UFC 248 has gone down in UFC lore. Zhang has all the tools and is riding a 21-fight winning streak. She’s a fierce puncher, can go the distance if needed and has shown to be very athletic. You don’t get to her position without those traits. However, I have to wonder just how ready Zhang is going to be after her last bout.

And Namajunas is no slouch. She is a highly skilled fighter whose chances of getting an upset increase if she can stay upright. She’s also a former strawweight champ who avenged a loss to Jessica Andrade with a split decision win last time out. Going after Zhang early will show how this fight is going to play out. Zhang can be susceptible after a grueling last battle, and Namajunas will attempt to take advantage of that.