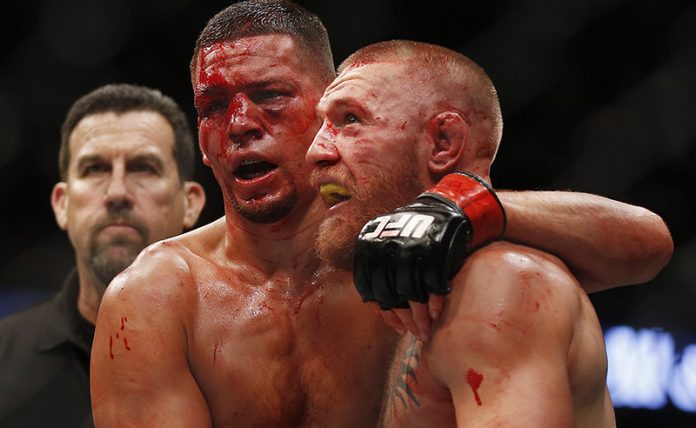 Their first fight was a thriller. The rematch was was an instant classic. Oddsmakers – and fans are already itching – for a trilogy bout in the Conor McGregor vs Nate Diaz saga.

Less than 24 hours after Conor McGregor and Nate Diaz left the octagon floor looking like the aftermath of the next Saw sequel, BookMaker has released money lines on a rubber match: McGregor is a -170 favorite in the UFC betting odds, with Diaz at +145.

For historical context, McGregor was up to a -450 favorite in their first encounter at UFC 196, and came into this past weekend’s bout with UFC odds anywhere between -130 and -150.

Kudos to McGregor for making the exact adjustments needed to beat Diaz. From the opening bell, the “Notorious” one followed the time-honored gameplan of attacking the Stockton native’s lead leg. It’s a weakness that has plagued Nate his entire career – McGregor joins Rafael dos Anjos and Benson Henderson as recent fighters who absolutely wrecked the limb en route to victories.

The Irishman also clearly studied the finer nuances of Nate’s fighting style. He was ready for Nate’s counters and awkward leaning defense and answered with punishing shots of his own. And when McGregor scored knockdowns, he showed great patience and refused to chase the Cesar Gracie black belt onto the mat in search for a finish.

McGregor evolved. Nate didn’t. The blueprint to beat the Diaz brothers has been out for years now, and McGregor followed it to the letter instead of blindly headhunting like he did the first time. And when he was in serious trouble, he dug deep and found a second wind. Diaz forced McGregor to become a better fighter.

Is an Immediate Rubber Match the Right Answer?

It might be a while before we see a third go-round. Prior to the rematch, Dana White had already gone on record stating that McGregor will defend his 145-pound title against interim featherweight champion Jose Aldo – win or lose. But after an insane fight like that, anything seems possible.

For MMA purists, McGregor-Aldo 2 is what’s fair. The aspirations of “Notorious” at higher weight classes and money fight has held up an entire division of great fighters. You can’t fault the UFC for favoring one of its biggest superstars, but the longer the promotion allows Conor to hold the belt without actually defending it, the more the legitimacy of the actual titles are tarnished.

For a long time, the ultimate goal was to become a champion and beat the best. But fighters are eyeing the massive purses being earned in “money fights” like McGregor-Diaz – and disregarding the idea of rankings altogether in search of dollars.

At some point, Dana White has to rein in his fighters so the sport doesn’t devolve into the mess that boxing has become. But considering the rollercoaster we just witnessed, would anyone really be mad at another go-round between Stockton’s finest and Dublin’s native superstar?