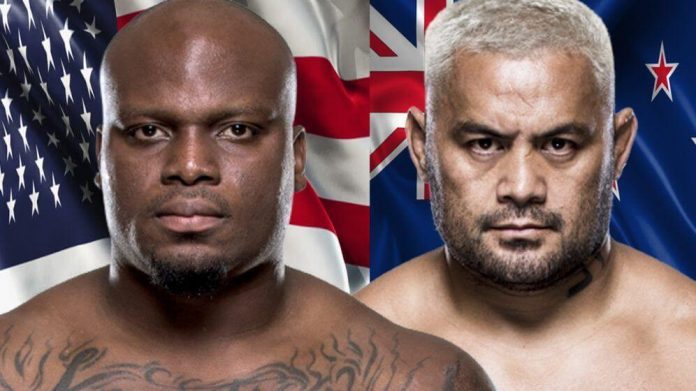 Derrick Lewis does not pass the eyeball test for a heavyweight contender. Sure, he’s big – but built more like a burly dude you’d see at your local dive bar. And when you watch him fight, you really start to question how he’s won six in a row and crept to No. 6 in the UFC rankings.

The guy wings his punches, has no wrestling background and offers little threat of submission. He’s not great in any one phase of MMA. But what he does have is heart and knockout power. In the thin heavyweight division, that can get you pretty far these days.

This Saturday, “The Black Beast” is facing former title challenger Mark Hunt in the main event of UFC Fight Night 110 in New Zealand. Hunt is easily the most decorated opponent Lewis has faced to date, and if the outspoken Houston native can win his seventh straight fight the UFC would have to consider him a title contender – something that nobody would have believed just a year ago.

Also on the card is Australian cult hero Daniel Kelly, the dad-bod fighter who can’t stop winning, former flyweight title challenger Tim Elliott, and an absolute barnburner of a scrap between Dan Hooker and Ross Pearson.

Let’s take a look at the UFC odds at BookMaker.eu and make some common sense quick picks that should net you some cash on fight night.

Lewis cannot keep winning. Right?? But then again, he wasn’t supposed to beat Travis Browne either. With 16 KOs in 18 career wins, Lewis has got the power to end anyone’s night with a single punch. And he just so happens to be catching a Mark Hunt that has been taking some beatings recently.

But still, I’ve got some serious doubts about whether Lewis’ freeswinging style can top Hunt’s K-1 level striking. The Super Samoan is battle-tested and packs plenty of pop of his own. If Hunt comes to the bout in shape and ready to bang for five rounds, it’s doubtful that Lewis can hang with him – this guy is regularly wheezing by the end of round three.

The fact that you can get Hunt at underdog odds is a steal. This fight’s gonna get ugly, but a prolonged standup battle favors the hometown hero.

Like Lewis, Daniel Kelly’s current win streak seems unsustainable. The 39-year old isn’t very fast or athletic, nor does he have knockout power. The Australian seems to get by on his Olympic judo background and a mountain of grit. He even scored an upset over former light heavyweight champion Rashad Evans in his most recent outing.

A native Australian, Kelly will likely have plenty of fans in the audience. They’ll likely be disappointed, since it’s difficult to think of any area where he has an advantage over his opponent. Derek Brunson is a good athlete with a wrestling background – as long as he doesn’t revert to wild headhunting the American should physically overwhelm Kelly.

Ben Nguyen is a fun fighter, but we saw his ceiling when Louis Smolka rolled him up like a joint and smoked him with ease at UFC Fight Night 91. He bounced back nicely with a win over Geane Hererra, but now the UFC is tossing him right back into the deep end with amatchup against Tim Elliott.

Elliott is coming off a win over Smolka, just one fight after giving UFC flyweight champion Demetrious Johnson his toughest test in years. The fact is that Elliott is huge for 125 pounds, and if he can smother Smolka he should be able to do the same to Nguyen.

Sit back and enjoy the fireworks, kids. Pearson is known for leaving it all in the cage, while Hooker has finished 12 opponents in 13 career victories. Neither man will ever be considered a lightweight contender, but they sure can put on a show.

Because they’re so closely matched, you’ll want to look at the over here. Pearson has gone to decision in seven straight fights, and he’s experienced enough to go the distance against a finisher like Hooker.