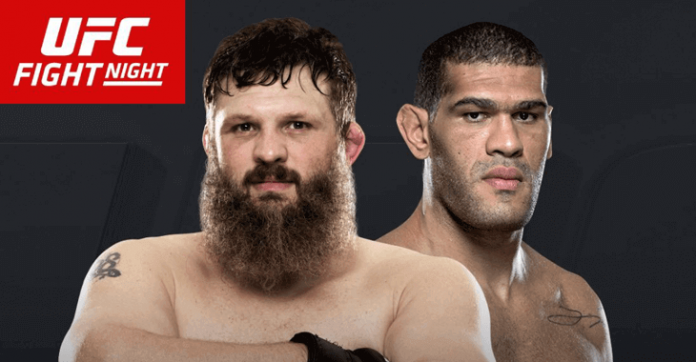 This Saturday, “Bigfoot” meets “Big Country” in a battle that has zero title implications but immense fan appeal.

In Roy “Big Country” Nelson (19-9, 14 KOs, 3 SUBs), you have the UFC’s most famous fat guy – a fighter who sits atop the cage and rubs his big belly after wins. He’s even less apologetic for his Joe Dirt mullet, which somehow makes him even more endearing.

Then there’s Antonio “Bigfoot” Silva (19-9, 14 KOs, 3 SUBs), a towering Brazilian who stands 6’4” and barely makes the heavyweight limit of 265 pounds despite a relatively lean frame. He’s a natural giant, a two-time title challenger and a guy who has left pints of plasma all over the octagon.

Both of them are unique characters, even in the UFC circus that is home to WWE stars, Olympic medalists and the Diaz brothers. Even better, these guys are both heavy hitters with diminishing chins. Somebody’s getting slept in this match, so let’s decipher whose fists you should place faith in. Let’s break down the UFC betting values, with fight odds courtesy of BookMaker.eu.

The Case for Roy Nelson

“Big Country” might be too tough for his own good. He’s lost six of his past eight, and the nature of those losses have been alarming. In four of them, he took extended beatings all the way to the final bell. Watching Stipe Miocic and Alistair Overeem showcase their entire striking arsenal and empty out their clips on Nelson’s 40-year old body was particularly tough. Mark Hunt knocked him out cold for good measure.

At this point, you might be asking yourself all that adds up to an argument for Nelson. Let’s put it this way: that kind of durability is a weapon. I don’t know of any other heavyweight that could have sustained the kind of punishment he took and not be eating meals through a straw. And he’s taking it from significantly larger men – Nelson is just 6’0”, 250 pounds with most of that weight attributed to his rotund stomach.

His extraordinary ability to take damage gives him prolonged time to land his nuclear overhand right. That right hand can erase a fighter’s consciousness with ease, and it’s his great equalizer. He’s become reliant on it to a fault – completely disregarding his Renzo Gracie black belt in jiu-jitsu – but when it lands, it’s lights out.

The Case for Antonio Silva

Like Nelson, Bigfoot has found wins extremely difficult to come by in recent years. Just 1-6-1, Silva’s downward spiral since his days as a top-10 heavyweight has been both drastic and dramatic. Both of his losses against Cain Velasquez could be used as arguments that MMA should in no way be a sanctioned sport – and he has never been the same since.

Compounding the physical damage he’s taken is the UFC’s ban of testosterone replacement therapy, of which Silva was a known user. While TRT is considered a performance enhancer, many fans give the Brazilian a mulligan as a former user because it was administered as a treatment for his acromegaly (which is serious stuff, according to WebMD).

But like Nelson, Silva has a saving grace despite the piling losses: he’s freaking huge. He’s one of the few fighters that actually had to cut weight to meet the 265-pound weight limit. When he balls up his fists and puts that weight behind his punches, it only takes a clean hit or two to put an opponent away.

Against Big Country, Silva will have a size and reach advantage. And despite his starkly declining athleticism, he is faster than the blubbery Nelson. The Brazilian can plausibly employ a stick-and-move strategy for three rounds.

It’s a tough call for MMA betting between two men quickly losing battles to Father Time. However, Silva’s decline has been far more obvious. He has never been slower or less dangerous. On top of that, he has been knocked out in the first round in four of his past five fights. You cannot reasonably compete in the heavyweight division without a chin. Nelson still has one, Silva does not.

Another bet to consider is the under at 1.5 rounds. Although there is a chance this becomes a prolonged trench war between slow fighters, it’s doubtful that Silva holds up under heavy fire.