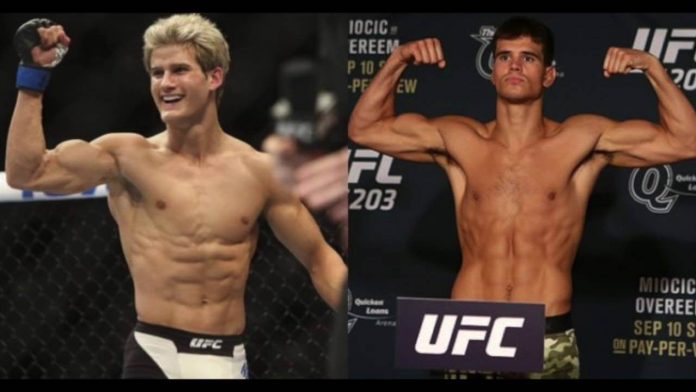 When it comes to memorable prospect bouts, a few come to mind right away. In 2011, a 25-year old Jon Jones met Ryan Bader in a matchup of undefeated young studs. This year, the nuclear-fisted Cody Garbrandt met a 24-0 Thomas Almeida in a bantamweight clash between two of the division’s most dynamic strikers.

But IMHO, this Saturday’s matchup at UFC Fight Night Sacramento between Sage Northcutt and Mickey Gall is more fascinating than either of those – or almost any other past prospect matchup you can think of. Back in October, I dedicated an entire article as to why.

Why UFC Fans Are So Excited About This Fight

Here’s the TL;DR version: this is a glorified high school locker room bout between the UFC’s Zach Morris and A.C. Slater.

Think about it: the 20-year old Sage Northcutt is a basically the blonde golden boy of the UFC. He’s got boy band spikes and is so cheerful it makes you wonder if he’s hopped up on Prozac 24-7.

Mickey Gall is a 24-year old foul-mouthed kid from Jersey who called him out in an expletive-laced rant after a star-turning performance against WWE superstar CM Punk. It’s doubtful that Northcutt has ever cussed in his life.

The Most Intriguing Matchup on a FOX Card Filled with Stars

The contrast between the kiddos is like night and day – and that’s what makes this so damn fun. Title implications be damned. These fighters are nowhere near the top 10, but we expect this will be a memorable match-up, based on all the hype these two are getting.

Let’s take a look at your UFC betting options and make the best picks for your buck. Please note, the UFC odds at BookMaker are updated daily and subject to change.

Think of some of the best athletes in any sport. When you watch somebody like Russell Westbrook or a prime Randy Moss it makes you realize that some humans are so genetically blessed they don’t seem so human. Northcutt is that type of athlete. No amount of training can ever give you that type of explosiveness and speed. Case in point:

Now, consider the fact that he’s been training in sport karate since he was four. At an age when you and I were likely dumping spaghetti on our heads, Northcutt was gaining the wisdom of Mr. Miyagi and training to hurt people. It’s likely that he was breaking boards before he was forming complete sentences. Now just 20 years later, the kid’s got nearly 80 world championships in sport karate.

On top of that, he was a top high school wrestler. Imagine having to fight a guy that seems like he was born in a lab to compete in combat sports.

Naturally, he’s taken to MMA like a fish to water. He mixes his electric striking with authoritative takedowns, giving him a dangerous, balanced offense. Against Gall, he will have an obvious striking advantage, as there are only a handful of people that can boast the type of resume he has in a striking discipline.

Like Northcutt, Gall is a young fighter who grew up inside a dojo. In this case, he started training BJJ when he was just 13. And it should be noted that he went to a legit Gracie academy, receiving his brown belt from the esteemed David Adiv. Also like Sage, Gall possesses natural athleticism, having wrestled and played football in high school.

Though Gall is nowhere near as physically gifted as Northcutt, Bryan Barberena proved that you don’t need to match him athletically to beat him. After weathering Northcutt’s signature first-round blitz, Barberena exposed Northcutt’s inexperience by dragging him to the mat and forcing him to tap out to a choke that wasn’t even fully applied.

Even with just three pro fights, it’s clear that Gall has UFC-caliber grappling. If he can force this fight to mat, then his chances of winning increase considerably. Northcutt might be an athletic freak, but he is still inexperienced when it comes to the nuances of jiu-jitsu – something that Gall has been training for over 10 years.

No matter how special Gall looks on the ground, it’s impossible to put much faith in him. While he’s 2-0 inside the octagon, the truth is that one of those fighters was 0-1 and the other was 0-0. While Northcutt has been beating UFC scrubs, his opponents were at least fighters that were rostered by the promotion.

Gall has never faced anyone remotely close to Northcutt’s level, and he’ll have to deal with a special athlete on top of everything else. That seems too much to ask from him.

I see two great value bets here. One, getting underdog fight odds on a far more experienced fighter in Northcutt seems like a steal. Second, the over on 1.5 rounds at +100 is a great play – at this point they are good enough not to get finished early on the feet or the mat.

For more UFC betting news, check out UFC 207 Odds: Champion Most Likely to Lose This December