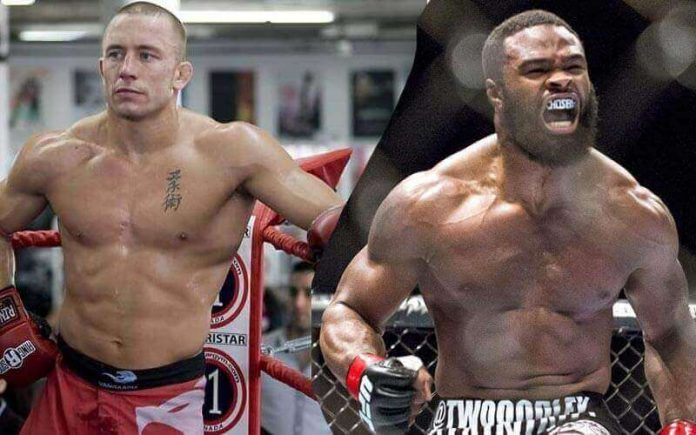 Although a matchup between welterweight GOA/lineal champion Georges St. Pierre and newly anointed titleholder Tyron Woodley is nothing but a rumor at this point, oddsmakers wasted no time in setting money lines for what would be one of the biggest bouts in recent memory for betting on UFC fights.

It’s been nearly three years since “Rush” last graced the octagon, but the French-Canadian superstar opened as a -150 favorite in the UFC lines at Bovada.lv. Woodley checks in at +120, meaning a winning $100 bet on the “The Chosen One” would pay out $120.

A two-time welterweight champion, GSP vacated his long-held title in 2013 after nine consecutive defenses. It wasn’t without controversy, as many felt that his final bout – a split decision when over then-No. 1 contender Johny Hendricks – should have gone the challenger’s way.

The 170-pound landscape has drastically shifted since St. Pierre’s exit, with the belt changing hands three times. There are still a few familiar contenders from the GSP era lurking, such as Carlos Condit, Rory MacDonald and Demian Maia, but new faces like Stephen “Wonderboy Thompson”, Woodley and a resurgent Robbie Lawler have made the welterweight division arguably the most competitive in the UFC.

During his dominant title reign, St. Pierre would regularly close around -300 or higher against challengers. His highest UFC betting line was -550 for a matchup with Dan Hardy, with his lowest at -165 for his superfight with B.J. Penn in 2009.

Even if the Tri-Star ace came back for good, it’s highly unlikely he’d be so heavily favored in this MMA fantasy against the current crop of contenders. This is a far more dangerous division than the one he left.

This could be a case of the GOAT who called “wolf”. St. Pierre has given indications that he’s wished to return for years now. First, it was undergoing a test training camp to see if he was in shape. Then it was announcing he was coming back. After that it was pitching hypothetical matchups in multiple weight classes, like a McGregor fight at 155 or a scrap with middleweight champion Michael Bisping.

And every time, the media understandably jumps on the new bit of information. Anything that involves one of the sport’s greatest superstar will make headlines. But the longer it takes the former champion to sign the dotted line of a fight contract, the less impactful his statements become.

Georges St. Pierre Is For Real This Time

The difference here is that Woodley has publicly confirmed GSP’s interest in the matchup. It’s a fight that he immediately asked for following his win over Woodley – and it looks like he might just get the payday he’s seeking.

“His interest is in fighting me,” said Woodley. “Georges St. Pierre wants to fight me, and guess what: I want to fight him…you cannot be the UFC champion and you cannot claim to be the best in the world if you know this living legend – the best welterweight in the history of our sport – is still wanting to fight.

He’s even got a date and location picked out: November 12 at the legendary Madison Square Garden. It’s the first time the promotion will host a card in New York, and it’s already considered the final marquee event of 2016. Keep your fingers crossed.

It’s difficult to say which way the lines will shift at this point. GSP remains one of the most well-known fighters on the roster, which will likely swing many bettors in his favor. But he’s also 35 now and will have to deal with an absolute beast in Tyron Woodley on top of ring rust. Expect the odds to shift towards a pick’em if the matchup gets made.

With a year of turnover in the UFC, which champions are likely to hold on to their titles? Check out UFC Championship Power Rankings By Division for more.