Home Latest News UFC on ESPN+ 12 Odds – The Korean Zombie Returns From the... 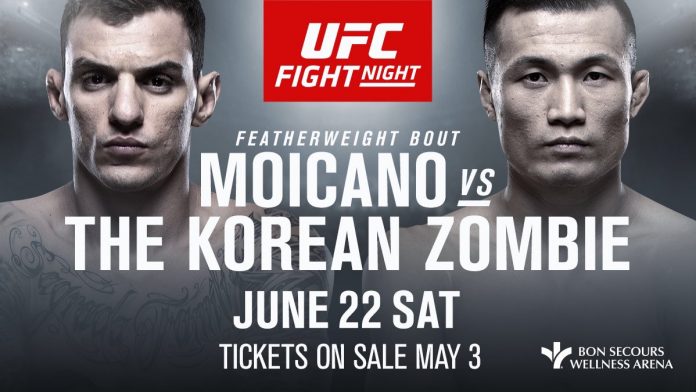 Out of all the ways to lose a fight, The Korean Zombie’s last outing against Yair Rodriguez might’ve been the worst possible outcome. In a five-rounder he was winning on points, Zombie was knocked out cold in the last second of the last round by a spectacular no-look elbow that instantly became one of the most iconic KOs in UFC history.

It was one of those “Showtime” moments where everybody watching asks how the hell did he do that, and one of those moves that fighters have to try in their next practice.

To make matters worse, it took Chan Sung Jung out of immediate title contention. But he’s not out just yet. The 32-year old returns to headline a fight against a top contender in Renato Moicano in South Carolina. Win or lose, a Zombie fight is always gonna be a lot of fun. However, another loss could effectively could mean the end of his time as a top featherweight – especially as a guy whose suffered major multiple injuries throughout his career.

The rest of the card is filled out with some decent scraps. Andrea “KGB” Lee is a star in the making, and she’ll get a chance to move past all the drama with her ex-husband. We also need to include welterweight Bryan Barberena in this conversation, as his last fight produced a Fight of the Year contender.

Let’s take a look at some of the best betting picks courtesy of the UFC odds at BookMaker.eu, and break down the upcoming action. As always, you should always keep an eye on your live betting options at BookMaker.eu in case you need to hedge your bets between rounds.

Both guys are obviously elite fighters with considerable skills – it takes a lot to swim the sharks in a loaded weight class. Oddsmakers are clearly siding with Moicano here, and we can’t be mad at the price.

Jung might win more than he loses, but it’s impossible to predict how he wins. He’s exceptionally dangerous on the feet and the mat, but rarely imposes his will in either area. It’s tough to bet on dudes who rely so much on jumping on opportunities that open up. While TKZ excels at creating chaos to capitalize on, that gets tougher to do the better the competition gets.

Moicano was flying under the radar for a few years, but fans are fully aware of his capabilities now. Once considered just a submission specialist, he might come off more of a striker. He was arguably outboxing Brian Ortega before getting caught with a flash submission, and he outstruck quality strikers in Cub Swanson and Calvin Kattar. Though he struggled with Aldo’s speedy counters, The Korean Zombie doesn’t have the same hand speed and reaction time.

There are a few major concerns about Zombie. Outside of this fight, bettors really have to be worried about his physical wellness. He’s not old, but his body has proven brittle and it really seems like he’ll age quicker than his contemporaries. He’ll also be at a speed disadvantage against a more technical striker, and that’s not a good sign against somebody whose taller and longer. Expect him to fall behind on points and starting chasing, leading to a decision loss.

This is a great price on a fighter who is clearly more talented than her opponent. KGB is fully developed kickboxer who is comfortable dealing damage at all ranges. Even if De La Rosa – a very good submission grappler – gets this to the mat, Lee’s underrated submission game should neutralize any threats. Every round starts on the feet, and that should be enough for KGB to pile up enough points to take the win.

What Barberena lacks in athleticism and speed, he more than makes up for in toughness and grit. Seriously, you need a bazooka to take this guy out. Based on the eye test, you might be tempted to bet on the ripped 6’3” Brown, but we like the guy who has made a habit out of out-toughing hyped prospects.