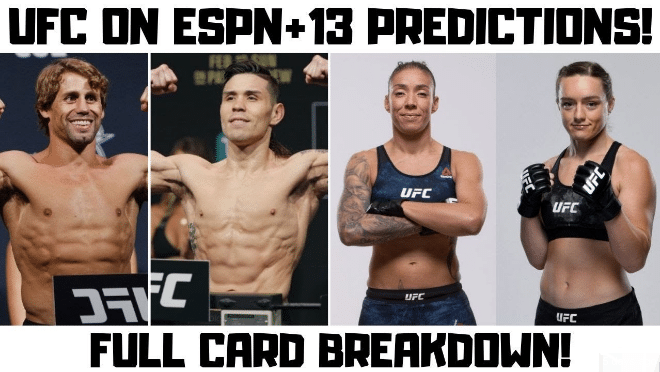 Almost three years ago, former WEC champion and bantamweight star Urijah Faber walked away from MMA. This Saturday, he’ll come out of retirement and carry a card in his longtime home of Sacramento. Make no mistake about it: “The California Kid” might not be the main event, but he’s the guy that everyone wants to see.

The UFC isn’t giving him a gimme fight though: Ricky Simon comes into the matchup on an 8-fight winning streak, with three of those coming in the UFC. Most recently, Simon bested the highly respected Rani Yahya to announce to the world that he’s a guy to watch at 135 pounds.

The main event is a women’s bantamweight bout between No. 1 contender Germaine de Randamie and No. 4 Aspen Ladd. The de facto title eliminator comes just one week after Amanda Nunes defended the strap against Holly Holm.

The last fight to take note of is a featherweight matchup between Josh Emmett and Mirsad Bektic. At 28 years old, Bektic has been touted as a future title challenger, and he’s been hailed as a “featherweight GSP”. Anyone who gets compared to an all-time great is somebody who should be on your radar.

Let’s take a look at the UFC odds at online sportsbooks, where we’ve picked out the best prices for each of the fights. Live UFC betting is available at places like BookMaker.eu if you need to hedge your bets between rounds.

Simon is 26 years old and an all-action, no defense fighter who throws everything at 100%. Faber is 40 years old and hasn’t fought since December 2016. Even if Simon wasn’t top-tier prospect, he’d still be the favorite in the online sportsbooks. It’s tough to see how Faber keeps up with a relentless young swarmer at his age.

You can look at Faber’s time off in two ways. On the bright side, he’s had ample time to let his body heal and recover from the rigors of actively fighting. On the other hand, how much has he lost since he hasn’t had to be in fight shape for so long? Will ring rust be a factor for somebody with so much experience?

Faber is not BJ Penn – the aging legend is a consummate professional who will make this competitive. Plus, Simon has had trouble with pressure fighters like Urijah in the past. Still, we’ve got to bet with the assumption that Faber doesn’t have the physical tools to compete with young lions like Simon. To his credit, “The California Kid” is probably too tough and experienced to be finished in this fight, which makes the decision prop a solid bet as well.

Time for Ladd to Prove It

Online oddsmakers all seem to agree that Ladd should be a clear favorite, and she’s certainly got a shiny 8-0 record to back that up. Just 24 years old, Ladd certainly has a lot of tools to work with, and she’s already one of the strongest women in the division. She does her best work physically overwhelming opponents and making things ugly – you can see the energy drain out of her opponents as the fight wears on.

In contrast, De Randamie is one of the best technical strikers in the division. Unfortunately for fans, she’s also one of the most patient: GDR is never in a rush and is perfectly content to win the points battle by sniping at a distance. On the feet, she’ll have a huge advantage over Ladd, who has a lot of developing to do when it comes to striking. But if this goes to the ground, GDR will be at an even bigger disadvantage.

We’re expecting a lot of late action on De Randamie, but she’s a great value anywhere from +125 and up. In her last fight, she fought a similar fighter in Pennington and was able to keep her distance and land enough strikes to win a decision. Though Ladd is more frisky, we don’t think she has the technique to get this to the ground as consistently as she needs to.

Aside from one loss to Darren Elkins – a fight he was easily winning before getting caught with a hail mary assault – Bektic has been perfect over the course of 14 pro fights. Most recently, he earned a tough split decision over longtime No. 1 contender Ricardo Lamas to cement his status as a dark horse contender. We’re not sure why his ranking is still low, but a win over Josh Emmett should earn a fight against a top 5 guy. Emmett is a big dude, but we don’t see him lasting against Bektic’s top-notch wrestling.

Check out the latest UFC on ESPN +13 betting odds.