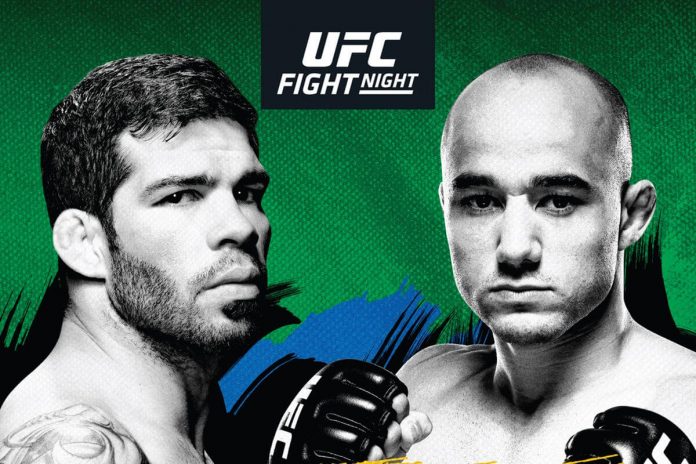 With this Saturday’s UFC Fight Night 144 AKA UFC on ESPN+ 2, in Brazil, the UFC is batting 2-for-2 with strong ESPN+ cards. Guess they’re really trying to get people to sign up for the streaming service.

In the main event, a de facto title eliminator between Marlon Moraes and Raphael Assuncao pits the UFC’s shiny new toy against the reliable warhorse. Assuncao has done more than enough to earn a shot at the strap, but an underwhelming personality and a lack of flash in his fighting style has held him back.

Moraes actually lost to Assuncao in his UFC debut, but has gone on to notch back-to-back Knockout of the Year contenders over Aljamain Sterling and Jimmie Rivera to earn some serious title cred.

Also on the card is former featherweight champion Jose Aldo, making a stand against the surging Renato Moicano. While Aldo is the guy that everybody knows, Moicano is the kid that fans that everybody’s excited about. As one of the only top 5 featherweights that Max Holloway hasn’t demolished yet, Moicano could earn a title shot with a big win.

Other fighters to watch include Demian Maia, Johnny Walker, Thiago Alves and Said Nurmagomedov. Let’s take a look at the UFC odds at BookMaker.eu and make a few quick picks for the night.

What Changes in Part 2?

In their first scrap, neither guy really got the upper hand against the other. Assuncao did just enough to take the first two rounds, but Moraes started asserting himself in the third with a more dynamic striking attack. The fight was contested entirely on the feet, as Assuncao didn’t come close to taking down his opponent and putting his highly-touted BJJ skills to use.

In a five-rounder, the assumption is that Moraes has more time to find an offensive rhythm. Because Assuncao doesn’t possess the wrestling to consistently bring down his opponent, he’ll have to get by with his counterstriking. Not a high-output striker to begin with, Assuncao will have to fight a bit out of his comfort zone against a dude whose been wrecking some legit contenders.

We’re looking at the value here. Assuncao is 11-2 in the UFC, with his only losses inside the octagon coming in his 2011 debut and to now-champion TJ Dillashaw in 2016. While he’s never put together an eye-opening run where he was straight trucking fools, Assuncao owns seven- and four-fight win streaks while operating at the top of the division for years. He finds ways to win, and already has a win over Moraes. Because his opponent has so much momentum, Assuncao’s price is too good for us to pass up.

Meeting at a Crossroads

Aldo is 32 and Moicano is 29, but their MMA careers are heading in opposite directions right now. It’s not like the former champ has fallen off a cliff, but he looks a step slower and his legendary fast-twitch reactions have lost a beat. We can’t fault him for getting thrashed by Max Holloway – an obvious all-timer in his prime – but he had serious trouble with Jeremy Stephens before scoring a rousing knockout. No offense to Stephens, but that’s the kind of guy that a prime Aldo would’ve feasted on.

Here’s a quick summary of Moicano’s brief UFC career, in order: a split decision win over Zubaira Tukhugov that snapped the Russian’s nine-fight win streak, a stunning upset over Jeremy Stephens, a submission loss to Brian Ortega late in the final round of a fight he was winning, a win that halted Calvin Kattar’s 10-fight winning streak, and a first-round submission of Cub Swanson. You could make the argument that if he had held on to beat Brian Ortega, Moicano would be lined up for a shot at Max Holloway.

If you don’t know who Moicano is, the Brazilian entered the UFC as a submission specialist, but has made a case as one of the division’s better strikers. He’s a dual threat fighter with a lanky frame and excellent athleticism. Don’t sleep on him.

Our pick: Fight goes to decision at -195

While we lean on Moicano to take this fight, Aldo is still a veteran predator that belongs at the top of the division. Protect yourself from a minor upset and take this three-rounder to go to decision. Moicano isn’t the type of guy that’ll force Aldo to brawl and drain his gas tank, nor does he have killshot power. He’s also never been knocked out himself.

Maia’s last three opponents: champion Tyron Woodley, current title challenger Kamaru Usman and former interim champ Colby Covington. All those guys are elite wrestlers who completely shut down Maia’s only form of offense – dragging guys to the ground and making balloon animals out of them with arguably the best pure BJJ skills in MMA history.

He’s got to be ecstatic to be facing Lyman Good, who is a striker by trade. Against other strikers in Jorge Masvidal, Carlos Condit and Matt Brown, Maia was the equivalent of a human wetsuit, rendering each fight into a lesson in submission defense. We know that’s exactly what he’ll try to do here, simply because he has no other choice. For a guy that’s been cagefighting for 20 years, his kickboxing is shockingly subpar.

One big consideration: Maia is 41 years old and coming off the kind of fights that age a fighter.