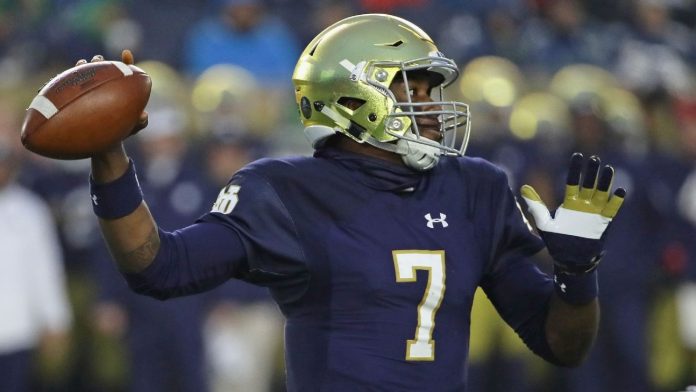 With a pair of wins and a No. 8 national ranking, Notre Dame is off to a nice start in 2018 and the College Football Playoff is a legitimate goal. But they will need to come up with an impressive win next time out when it hosts the Vanderbilt Commodores.

Vandy has cruised to a couple of victories thus far in 2018 but the level of competition hasn’t been anywhere near what it will be facing in this one. Notre Dame is the more talented team and has the home field advantage, so it is the clear favorite in this matchup.

Notre Dame and Vanderbilt will face off on Saturday, September 15th, 2018 at 2:30 p.m. ET at Notre Dame Stadium in Notre Dame Indiana. The game will be nationally televised on NBC.

Notre Dame is listed as the 14-point favorite in this matchup against Vanderbilt. The Fighting Irish is listed at -600 on the moneyline to pick up the win while the Commodores are the +447 underdog. The scoring total is listed at 52 points as the oddsmakers don’t expect a ton of points. Notre Dame has been involved in a pair of low-scoring games to begin the season.

Notre Dame beat Ball State last time out but it was much closer than expected. The Fighting Irish led by only eight points at the half, and while they did push it to a 24-6 lead heading into the fourth, Ball State scored 10 points in the final quarter to make things interesting. Notre Dame’s defense held firm and the team did win the game 24-16 but would have preferred to win this one much easier. It comes on the heels of a win over a ranked Michigan team so while it wasn’t the greatest outing, overall Notre Dame has a decent body of work.

Vanderbilt opened the year with an easy win over Middle Tennessee and knocked off Nevada by a score of 41-10 last time out. The Commodores only led by a touchdown at the half but scored 17 points in the third quarter to take control and cruised to the win. Running back Ke’Shawn Vaughn was impressive, rushing the ball 11 times for 93 yards and a pair of touchdowns. Quarterback Kyle Shurmur also had a nice showing, going 23-of-32 for 258 yards and a pair of scores.

Notre Dame’s quarterback, Brandon Wimbush, did not have a good outing against Ball State. He completed 17-of-31 passes for 297 yards but didn’t throw a touchdown pass and tossed three interceptions. The Fighting Irish moved the ball but all of those turnovers allowed Ball State to hang around.

The offensive line didn’t help much as Wimbush was under a lot of pressure. Notre Dame is a comfortable favorite in this game but things will get interesting if the passing game has similar struggles. Vanderbilt will undoubtedly check out the Ball State blueprint and aim to follow it. Wimbush was not great last season and is off to a slow start in 2018. He has to get it going for the Fighting Irish to truly compete for a national title.

Notre Dame vs Vanderbilt – Who To Bet

Notre Dame should play better offensively in this one, but this is a pretty big spread for a team that has played a pair of close games in 2018. The Fighting Irish are not likely to fully get away from a Vanderbilt team that has some potential on offense. Take the Commodores to cover the spread despite taking the loss in this matchup.

Our Pick: Take Vanderbilt +14 at Bookmaker.eu