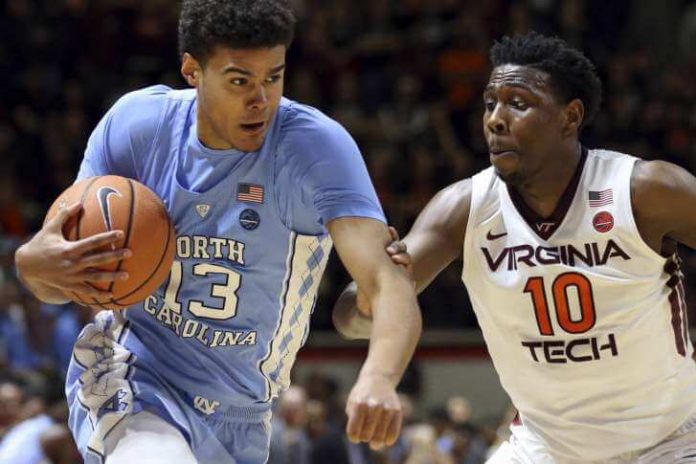 Even though North Carolina is the bigger-name team, this figures to be a competitive showdown. The Tar Heels have the home court, which will give them the edge as favorites, but Virginia Tech has the superior record. Both of these teams feel like they have enough talent to push for the conference title and this game could help give one of them an early leg up.

The Hokies have a record of 15-2 on the season and have gone 4-1 in ACC play. Their lone loss came at the hands of Virginia, which is also one of the best teams in the country. Virginia Tech bounced back from that defeat with an easy win over Wake Forest last time out.

North Carolina is 14-4 on the season, which is more losses than it generally has at this point in the season. The Tar Heels are also 4-1 in conference, with the loss coming at home to Louisville. North Carolina has won two straight over Notre Dame and Miami, but both were by single digits.

Virginia Tech allows only 59.5 points on the season, which is one of the best marks in college basketball. The Hokies average 78.5 so it’s not like they don’t have the talent to score, but know how to lock down on defense, especially in the halfcourt.

It’s a clash of styles because the Tar Heels score 87.3 points per game. North Carolina grabs 11 more rebounds per game than Virginia Tech, so the Hokies have to make sure to hit the glass hard in this one and not allow a lot of second-chance points. If Virginia Tech can get back in transition and rebound, it could frustrate North Carolina.

He was impressive last time out against Wake Forest, pouring in 24 points and adding seven rebounds. The Tar Heels may have the overall talent advantage, but if Alexander-Walker can have a big game, it helps mitigate that difference.

Virginia Tech is going on the road, which is never easy. The Tar Heels have a nice collection of talent but there is no doubt the team isn’t as strong as it has been in past years. The Hokies are a good moneyline choice as they have the type of talent to pull off this upset.

Look for Virginia Tech to force its style of play upon North Carolina and come away with the win. The “under” should be considered on the scoring total as this one will not be as frenetic as the Tar Heels prefer.

Check out the latest NCAA basketball betting odds for today.