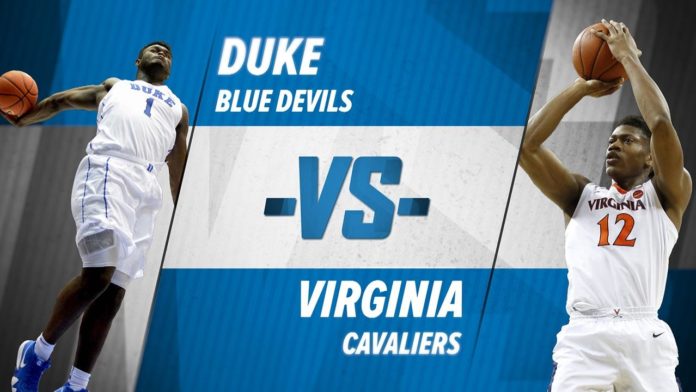 It’s strange to see the Duke Blue Devils with a 9-8 record at this point in the season. What’s even stranger is that they had to win their last two games to get over the .500 mark. The Dookies look to win three in a row for the first time this season when they host the ACC leading Virginia Cavaliers on Saturday. The Cavs had their four-game winning streak snapped and they lost for just the second time in 2021 getting scorched by Florida State.

This college basketball game will air live on ESPN at 8 p.m. ET on Saturday, February 20, 2021 from Cameron Indoor Stadium in Durham, NC.

Virginia had been playing so well that their game at Florida State was quite a shock. Not so much that they lost since the Noles are a decent club, but that they got outworked, allowed 81 points and suffered their worst ACC loss in four years, 81-60. The setback stopped a four-game winning streak and was just UVA’s second since the day after Christmas. The Cavs were 11-1 SU and 7-4-1 ATS in 12 games before that loss. They were catching 2-points on the line and fell to 2-2 SU and 1-2-1 ATS in their last four road games.

Beating two of the worst teams in the ACC is proof that the Blue Devils aren’t in that category. They do have some work ahead of them if they want to reach the NCAA Tournament again, though. Following a three-game losing streak where they went 0-3 ATS and fell below .500 for the first time, the Dookies responded with double-digit wins over NC State and Wake Forest. They are 9-8 SU and just 5-12 ATS. Duke lost its last two home games to Notre Dame and UNC going 0-2 ATS. They are 6-4 SU and 2-8 ATS inside Cameron.

When the Cavs don’t play defense it really impacts their chances of winning. They hadn’t allowed more than 68 points in any game since losing to No. 1 Gonzaga the day after Christmas and they held their two previous opponents to less than 50 points. On Monday they were done in by a barrage of three-pointers. Sometimes you have to tip your cap to the opponent for playing a better game, though Tony Bennett had his own take. “You can’t control if they can make the big-time shot or an acrobatic play, but we can control if our defense is set, if we’re active on the ball, if we’re in position and not committing some lapse in judgment.”

With that stinker out of the way hopefully the Cavs can reply in a positive way. There’s a good chance that happens since the FSU game was the perfect storm of awfulness for UVA. Not only did they allow more than 20 points over their season average, they let the Noles knock down 50 percent of their shots and 13 of 24 triples while forcing just five turnovers. Leading scorers Sam Hauser and Jay Huff combined to score just 15 points. The Cavs are too good to allow play like that to consume them.

Freshman Jalen Johnson has given up on the season but the rest of team hasn’t. Just a few days after the projected lottery pick in the next NBA draft opted out, the Blue Devils posted their second biggest win of the season, 84-60, over Wake Forest. We saw a transformation from the Devils after they were gouged during a three-game losing streak. Over that stretch they allowed an average of 87 points cashing the OVER in all three contests. When you score more than 80 points you should win, it didn’t happen for Duke.

The offense will suffer without Johnson in the lineup. He averaged 11.2 points and 6.2 rebounds shooting 52.3 percent from the field in 13 games. Duke didn’t look bad in its first outing without Johnson shooting over 54 percent while scoring 84 points against Wake. We can’t yet say the Dookies are out of the woods since the last two wins were over NC State and Wake, teams with a combined eight ACC wins. The schedule toughens up with the Cavs paying a visit. But if Duke can continue to play solid defense there’s always a chance.

I’m going to go out on a limb here and say there’s no way the Cavs play as poorly as they did against FSU. Everything that could go wrong pretty much did and the result was as expected. Duke may have the name but this group hasn’t lived up to it. And the loss of Johnson is going to hurt them when they play tougher competition. And the Cavs are tougher competition.