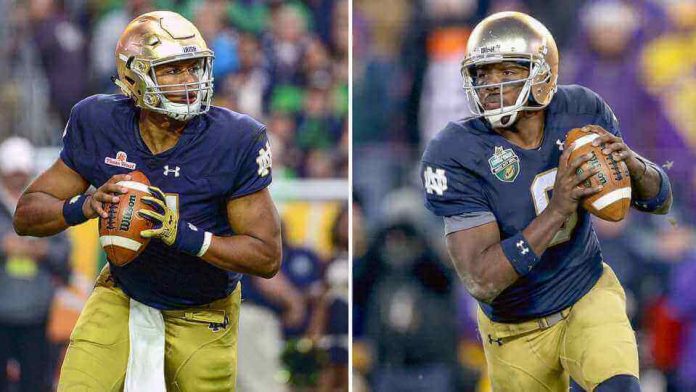 College football coaches love to take care of their major position battles in the spring, but often times, those wars wage into the eve of the regular season and even into the year as well.

Several high-profile programs still aren’t quite sure who their starting quarterbacks are going to be in September, and BookMaker.eu has odds posted on who will ultimately win those college football quarterback jobs.

DeShone Kizer took over the starting job for the Irish last year when Malik Zaire got hurt. Now, he doesn’t look like he’s going to give the job back. Kizer asserted himself well, throwing for 2,884 yards and 21 TDs and adding 520 yards and 10 scores with his legs. He’s a better athlete than Zaire is, and in this day and age, that counts for a lot in the college game.

Kizer has picked up a lot of steam in the college football odds in recent weeks, going from the -210 favorite to start for the Golden Domers in Week 1 to a -375 choice.

You’d figure that a program like Alabama could find a quarterback to build around year in and year out, but once again, Nick Saban has a real question mark under center in a year his team is favored to win a second straight National Championship.

Cooper Bateman is the prohibitive favorite at -325, and it makes all the sense in the world that he wins the job. Bateman started over Jake Coker in one game last year and was awful before getting yanked. He’s had plenty of time to continue to learn this offense, and Saban has always been high on his abilities.

Blake Barnett (+385) has picked up a lot of steam in the football betting odds, though, and he very well could be the QB for the Crimson Tide against USC in Week 1 as well. David Cornwell (+1500) and Jalen Hurts (+1500) are very likely out of the race.

Jimbo Fisher is a bit of a quarterback whisperer. He’s always had fantastic pivots throughout his career both as a head coach and as an offensive coordinator before that. This year, though, the Seminoles don’t have a cut and dry answer to their starting quarterback problems.

Malik Henry is a year or two away from getting the nod, and in the meantime, Sean Maguire and Deondre Francois have been battling it out in the spring.

Maguire was the easy favorite at -600 among college football picks just a week ago, and if we had to guess, he’s ultimately going to lead the Seminoles out of the tunnel in Orlando in a few weeks against Ole Miss. Francois has had a great camp though, and he has improved from +390 to +195.

Down I-10 and I-75, the Gators have similar issues at quarterback with no true heir apparent ready to take over under center. Florida was abysmal at QB last year, and bringing in Austin Appleby from Purdue was meant to really put a jolt into this race in the Spring.

Instead, Appleby has disappointed, and it feels like the best option for the orange and blue is Luke Del Rio. He opened at -300 to win the QB job and has since improved to -500. Del Rio will have to show some incredible improvement to keep his job, though, because he was awful when he had his chance to lead the Gators in relief last year.

Jim Harbaugh is in the market for quarterbacks seemingly every year at this point. Last year, he lured Jake Rudock from Iowa to play for Big Blue, and this year, he’s got former Houston QB John O’Korn set as his likely starter.

O’Korn has great mobility and could end up being just the quarterback the Wolverines need to get over the hump and contend for a spot in the CFP this year, and at -350 to start in Week 1, he’s the prohibitive favorite as well.

Wilton Speight, who was Rudock’s backup last year, is the only serious contender to take the job at +275, while Miami transfer Shane Morris (+2000) is the longshot and isn’t likely to play much, if at all this year.