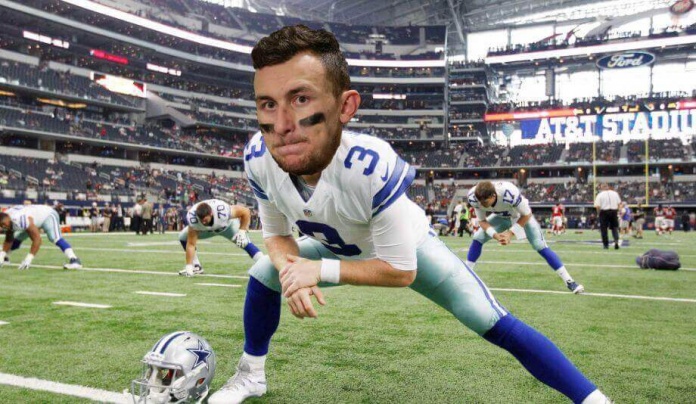 You’d think that a 23-year old quarterback who was a first round NFL pick in the draft wouldn’t have any trouble finding employment. Alas, that’s what’s happening with Johnny Manziel, a man who caused so much trouble that he couldn’t keep a home with the Cleveland Browns, the most quarterback-riddled team in the NFL over the course of the last two decades.

Why Johnny Manziel May Be Good for the Cowboys

Jerry Jones, the braggadocio owner and general manager of the Dallas Cowboys never minces words, and he often says exactly what’s on his mind, whether he should or shouldn’t.

The Dallas Cowboys quarterback for the moment is Tony Romo, but he’s coming off of yet another collarbone injury and is 36 years old, not to mention the fact that he’s still never brought the Cowboys anywhere near the Super Bowl in his career. Father Time is certainly working against Romo, and Jones hasn’t done a thing about securing his heir apparent.

Immediately after the NFL Draft this year, Jones came out and said he regretted not offering up more assets to trade up to snare Paxton Lynch. He did pick Dak Prescott in the fourth round, but he doesn’t exactly excite as the potential future of the Cowboys, nor does incumbent backup Kellen Moore.

It almost makes too much sense for Manziel to land in Dallas. This is the same franchise which just took a chance on Greg Hardy after his domestic violence suspension and was rumored to be trying to trade for Adrian Peterson while he was going through his de facto year-long suspension for similar issues. So why not Manziel, a man who has been questioned for his work ethic and hasn’t been able to stop partying it up and now is in the midst of his own domestic violence spat?

Is Manziel Among the NFL Pro Picks?

The allure certainly has to be there for Jones, if for no other reason, the fact that he is really going to need a franchise quarterback sooner rather than later. Even though Manziel’s stats aren’t all that spectacular (57% completion percentage, 1,675 passing yards, 7 TDs, 7 INTs and 259 rushing yards in 14 career games), he’s still got all of the intangibles you like to see out of a quarterback.

He was a winner at Texas A&M, and though he hasn’t quite figured out how to put it all together in the NFL yet, we don’t doubt his potential. But let’s face the facts here. Johnny Manziel is never going to be an NFL quarterback again.

Unless there’s some sort of intervention coming for the man they called “Johnny Football” in College Station, we just don’t see the partying stopping, and we don’t ever seen Manziel taking football dead seriously, as he should be. Many classified his time in Cleveland as a joke, and in the NFL, even the supremely talented only get so many chances. Is Manziel truly all that talented? His stats don’t suggest it yet.

To compare with other highly touted quarterbacks… Andrew Luck was on the verge of a 40-touchdown season as he was entering his third year in the pros. Russell Wilson won a Super Bowl in his second year in the NFL.

Blake Bortles threw for 4,400+ yards and 35 TDs last season in Jacksonville. Jameis Winston and Marcus Mariota are both staying out of trouble and have their jobs on lockdown as starting quarterbacks for the Bucs and Titans respectively.

Not All NFL Quarterbacks Come With Baggage

If the Cowboys wanted to take a shot on a troubled quarterback who brought baggage with him, they should’ve signed the man who Cleveland signed to replace Manziel, Robert Griffin III. At least RGIII proved on the field that he can play. We still aren’t all that sure that Manziel can put it together for a full game, let alone for 16 of them in a row.

Deshaun Watson, Brad Kaaya, Chad Kelly, Luke Falk and Baker Mayfield are amongst NFL best bets for candidates next season, and there are plenty of quarterbacks who could be stopgaps to the next franchise quarterback in Dallas that could be had in free agency next year.

Though Jones has never been known to make safe yet unspectacular choices, he’d be far better served avoiding the headache that is Johnny Manziel and either waiting for his next quarterback in the NFL Draft or trying to sign one of the free agents-to-be after this season.

Which Team Will Johnny Manziel Play for in 2016?

The NFL bets are on to see where Manziel is headed next. Online sportsbook TopBet recently posted the Cowboys as EVEN money to hire Manziel next season, with the Rams (4-1) and Browns (5-1) as the next favorites.

Here’s a full list of Johnny Manziel odds, with “Any CFL Team” listed as a 30-to-1 longshot.

Which teams are likely to be headed to the Super Bowl this year? Check out the 2016 NFL Playoffs Odds for All 32 Teams