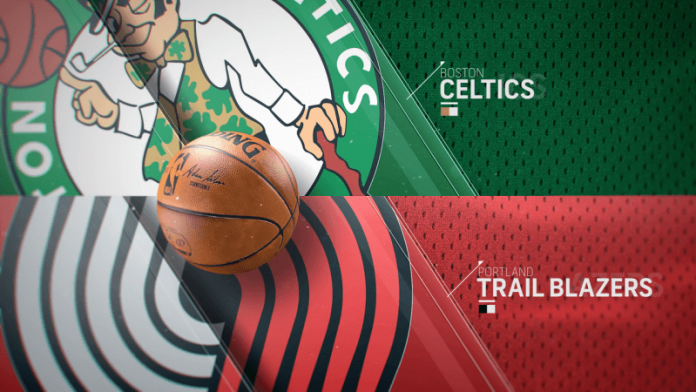 The Boston Celtics are trying to emerge from a slumber that’s lasted pretty much the entire season. Projected as a contender in the Eastern Conference, the Cs never got their footing and are instead clumped with a group of teams behind the top three in the conference. They take a three-game winning streak into Tuesday’s matchup with the Portland Trail Blazers, who are also fighting for positioning in the Western Conference race. The Celtics have won two straight and five of the last seven meetings between the clubs.

Tuesday’s game will air live on TNT with tip off at 10 p.m. ET from the Moda Center in Portland, Ore.

Teams need a spark to turn a season around and the Celtics may have gotten theirs on Sunday night. Playing one of the top teams in the Western Conference to open a three-game road trip, the Celtics looked ready to cave trailing by 14 points late in the third quarter. Then something happened. From that point the Celtics outscored Denver 40-8 to snatch an improbable 105-87 victory, their third straight and fifth in six games. And they did it on the road against the hottest team in the NBA.

The Nuggets had won eight in a row and were tracking down the leaders in the West. It was also good news for Boston backers, who got their first payout in four games. The Celtics have been hovering around .500 for most of the season and are 28-26 SU and 25-28-1 ATS. They are 3-1 SU and ATS in their last four games in the Rose City.

It’s been a rough go lately for the Blazers, who have dropped four of six going 2-4 ATS in that stretch preventing them from moving up the conference standings. They enter the week in sixth place two games behind the Lakers and three back of Denver. A prolonged slump could see them go the other direction with Dallas and Memphis close behind.

Basketball is a team game so it’s hard to blame a single player. But when Damian Lillard gets so much praise when the team does well, he also deserves some criticism when it struggles. In Sunday’s 107-98 loss to Miami, Lillard scored only 12 points on 3 of 10 shooting. Lillard is averaging 20.3 points in six April games and the UNDER is 5-1 in those outings.

The Celtics have a wonderful opportunity to change the narrative of their season on this road trip. The stunning comeback against the Nuggets showed what the group is capable of and with games against the scuffling Blazers and a Lakers squad without its two best players, Boston can make a push up the East leaderboard. That win over Denver, where they held the Nuggets to eight fourth quarter points, will be just a side note if the Celtics fail to build on it.

In a typical Boston game it was the trio of Jayson Tatum, Jaylen Brown and Kemba Walker doing most of the heavy lifting. Tatum tallied 28 points and 10 rebounds, Brown had 20 points with eight boards and two blocks while Walker chipped in with 14 points and six assists. Those three have carried the club all season and we’ve seen the Celtics play much better when they are all on the floor together.

The Blazers are still comfortably in a playoff spot despite a recent 2-4 slide, and they are also within spitting distance of a few teams ahead of them. They better snap out of their funk before those things chance, which could happen very quickly and easily in the volatile conference standings. The good news is that the team his relatively healthy. Jusuf Nurkic returned to the lineup against Miami after missing the previous game to rest his sore knee and a possible dangerous situation was avoided when Enes Kanter returned after knocking heads with another player.

While the health is there the execution on the floor hasn’t been. The Blazers committed 17 turnovers against the Heat and were just 11 of 35 from three-point range. Lillard was off his game scoring just 12 points while turning the ball over five times. Even with a healthy lineup the Blazers need Lillard to be Lillard in order to win games.

We’ve seen this before from the Celtics. When it looks like things are going well they revert to their inconsistent ways. That game in Denver was epic and I do expect them to carryover that momentum. And they are tough when Brown, Tatum and Walker are playing at a high level.