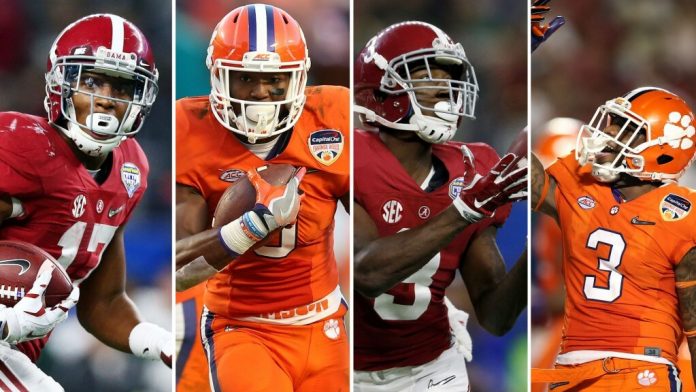 Nick Saban has done a lot in his days with the Alabama Crimson Tide. He’s got four National Championships to his credit already in Tuscaloosa, including one in which he went 14-0 and beat Texas. But no man has ever gone 15-0 in college football in a single season, and Saban would love to be the man to set that bar.

It’s really hard to argue with anything this Alabama team has done this year. The Crimson Tide have rolled to a 14-0 mark, and they’ve had just one game this year decided by single digits, that coming way back on September 17 against Ole Miss.

They’ve allowed 160 points all season, 73 of which came against Mississippi and Arkansas. The other 12 games? Just 93 points allowed.

The Tide have scored 15 non-offensive touchdowns this season, tops in the FBS by a wide margin, and they did all of this against a schedule chock full of what are perceived to be strong SEC foes.

Clemson: Let’s Take a Look at the Raw Stats

But Clemson shouldn’t be denied either. The team’s one loss against Pittsburgh was relatively fluky and didn’t end up hurting it in the end, and its 31-0 win over Ohio State in the Fiesta Bowl in the face of what was a 75/25 pro-OSU crowd at best was the crowning achievement of a season where so much could have gone wrong.

Games against Louisville, Florida State, Virginia Tech and N.C. State, and even Auburn and Troy could have been lost but were escaped.

The raw stats though, are still tremendously impressive. Deshaun Watson is averaging 8.0 yards per pass attempt and threw 38 TDs this season even though he also had 17 INTs, and just recently did he really get his legs back under him and start to take off and run again.

We know that Watson, Wayne Gallman, Mike Williams and so many others are going to be playing on Sundays in the not-distant future, and this team knows that this game against the Crimson Tide is certainly winnable.

Of course, the undertone in this game is the fact that this is a rematch from the title game last year. The college football betting spread for the title game this year opened at -6, which was exactly where it closed at a year ago. The total of 51.5? Just a point higher than last year’s closing over/under of 50.5. Think there are some similarities there?

“The public is clearly going to back the Crimson Tide, as has been the case most of the year, but we were hesitant to open this spread on the key number given the late support Washington received from sharp bettors tonight,” BookMaker.eu spokesman Scott Cooley said. “It will be interesting to see where the action takes the number, but this is shaping up to be a memorable CFP Championship.”

The game didn’t play out exactly the way most figured, as Alabama was never really able to totally put the Tigers away, even when they finally took a two-score lead for the first time halfway through the fourth quarter. The Tigers had 550 total yards of offense, more than any team had put up on the Tide last season and significantly more than they have allowed since.

Can Watson Do it Again?

If he’s going to do so, he’s probably going to need his defense to play a game that more resembles the 31-0 Fiesta Bowl win over Ohio State than last year’s 45-40 barnburner against Alabama.

The Crimson Tide are a lot more conservative this year than they were a season ago, and part of that is due to the fact that Jalen Hurts is a true freshman playing quarterback against a man who is about to be one of the top picks in the NFL Draft, and don’t think that Saban and departing OC Lane Kiffin don’t know that.

Expect to see a heck of a lot of running the football in this one from the Tide to make this game as short as possible, much like they did in the Peach Bowl against Washington in a clinical, yet anything but sexy 24-7 victory.

For more college football odds, be sure to also check out our Football Betting section for LIVE NCAAF Odds.