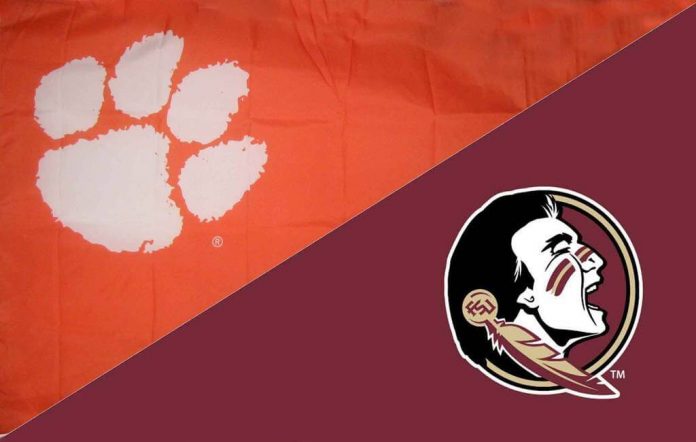 The Clemson Tigers are sitting on top of the college football world at the moment. They’ve brought the National Championship back to Death Valley and will surely be celebrating hard what they accomplished in 2016. But if we’re being realistic, this year’s team is nowhere near last year’s team. The Florida State Seminoles feel definitively the better of the two squads, yet it’s Clemson that has opened up the season at -2 at home on our College Football Game of the Year odds.

The Case for Clemson

The case for Clemson is simple: The team virtually never loses in Death Valley. Sure, Pittsburgh came to Clemson last year and picked up a shocking victory, but Florida State has only won here once since 2003. That victory, of course, was the coming out party for Jameis Winston and set the Seminoles on a path to the National Championship in 2013.

Should Florida State take out Alabama in Week 1, this game might be looked upon as the last giant hurdle left on FSU’s schedule before getting into the College Football Playoff. Should it get beaten by the Crimson Tide as most suspect will be the case, this could end up being an eliminator for the CFP.

Clemson’s big challenge is going to be quarterback play. The team never had to worry about anything with Deshaun Watson under center, but now that Watson is playing for the Houston Texans, it’s time to break in a new pivot. Let’s also not forget that the Tigers will have to replace their top rusher (Wayne Gallman), their top receiver (Mike Williams) and one of the best tight ends in America (Jordan Leggett).

Whichever of the trio of Kelly Bryant, Zerrick Cooper and Hunter Johnson is playing in this game will have his work cut out for him. The Florida State defense is aggressive and is sure to play to its strengths of rushing the passer. Derwin James is all over the field and has had a good history in big games. Just as Jalen Ramsey completed ruined the Tigers four years ago here in Death Valley, this could be James’ time to declare himself as a top five pick in the NFL Draft.

Deondre Francois played his butt off against Clemson last year. He threw for 286 yards in spite of the fact that he was under constant duress in the pocket. He still delivered pass after pass while taking shot after shot, and though his final numbers didn’t look great, he had the Seminoles on the verge of an upset until Leggett caught the game-winning touchdown pass with 2:06 to go.

We know that Francois is a gamer, and he isn’t going to be afraid to go out on the road, even in one of the most hostile environments in America.

For that reason, Florida State is the logical pick at +2 in this game. The Seminoles probably won’t be any worse than 8-1 at that point, and if that’s the case, they’ll be a top five team in the land in all likelihood. Can we say that for sure about Clemson? The Tigers have very tough games against Auburn and at Louisville to contend with in September, and there are a total of four road games to be played heading into this point. If things go sideways in Death Valley, FSU could end up favored by a touchdown or more in this one, even on the road.