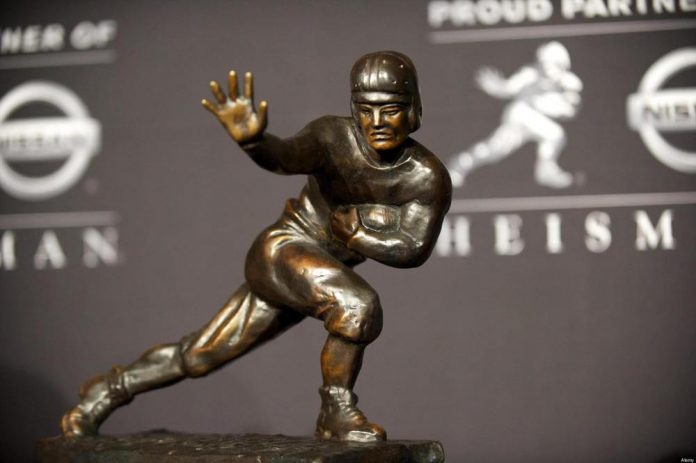 Rare is the man who is able to go wire-to-wire in any given season when it comes to the Heisman Trophy odds. Especially of late, we aren’t even necessarily all that sure who the Heisman contenders are going to be with the glut of incoming freshmen and redshirt freshmen who burst onto the scene with no notice.

Odds To Win the Heisman Trophy

Last year, that was the case with Sam Darnold. USC started off the season with Darnold on the bench in favor of Max Browne under center. The Men of Troy began with a 52-6 thumping at the hands of Alabama and a 27-10 loss at Stanford with a squash match victory over Utah State in the middle. The Trojans had seen enough and decided to start Darnold the rest of the way.

Though the redshirt freshman lost his first start at Utah, he ran the table from there, including beating Washington in Seattle 26-13 and putting 52 points on the board against Penn State in the Rose Bowl. The Trojans were one of the best teams in America at the end of the season, and now, Darnold figures to be the man who can get the Trojans back to the top of the Pac-12 and into the National Championship picture for the first time since the sanctions stemming from the Reggie Bush saga.

Darnold tossed 31 touchdowns in his redshirt freshman season, and he finished up the year dropping 133 in his last three games for this offense.

Again, though, it’s still virtually impossible to go wire-to-wire to win the Heisman Trophy. Buyer beware, especially at a price of just +375 to hoist the most notable individually earned trophy in sports.

It’s just as hard to repeat as the Heisman Trophy winner. To date, there’s still only been one man to do it, though Lamar Jackson will have a shot to go back-to-back and join Archie Griffin in that regard this year.

Jackson’s numbers were video game-esque last season. He threw for 3,543 yards and 30 touchdowns and rushed for 1,571 more yards and 21 scores. That said, he and his Cardinals struggled down the stretch, and teams clearly started to figure out how to slow down Jackson after he amazing start to the campaign. It was all capped off with a 29-9 loss to LSU in the Citrus Bowl, a game in which the Cardinals amassed just 220 total yards of offense and had 11 first downs.

Still, Jackson is the best dual-threat quarterback in the nation and feels like a lock to throw for 3,000 yards and rush for over 1,000. If the Cardinals can stay relevant, Jackson will be in the running for the Heisman the whole year. That’s why he’s a 10 to 1 choice and the third favorite to win the honor.

All three of J.T. Barrett, Baker Mayfield and Jake Browning have been in the Heisman Trophy discussion in the last couple seasons, and all three are back this year. All three figure to have teams that could contend for the College Football Playoff this season, and that’s generally a good sign for having a shot at the Heisman Trophy as well. These men are all amongst the top five favorites to claim the Heisman as well and should be considered legitimate options to win the award.