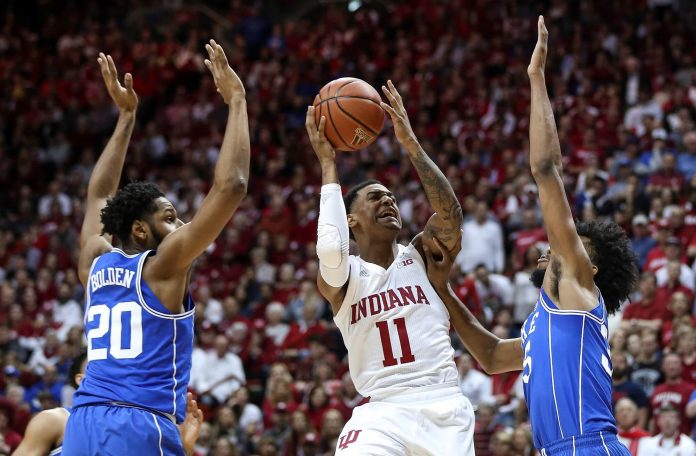 The Duke Blue Devils aren’t invincible. That’s what Gonzaga proved last week. However, they are still very good, and the Indiana Hoosiers are going to get a taste of that this week. This is a matchup between two of the most successful programs in the history of college basketball. Duke is still on top but Indiana doesn’t have that type of talent this year.

Indiana would love nothing more than to go on the road and pull an upset that would no doubt be a huge benefit for March Madness purposes. However, the Hoosiers more likely goal will be covering the spread because Duke has a dominant team and will be backed by a raucous crowd. The Blue Devils will aim to get back on track in this one and should have no issue doing so.

This game will be held at Cameron Indoor Stadium in Durham, North Carolina at 10:30 p.m ET on Tuesday, November 27th, 2018 and televised on ESPN.

The Duke Blue Devils are 5-1 on the season. They fell for the first time last time out against Gonzaga but still might be the best team in the country. Duke has played a pair of games at home this season and has won both of them.

Indiana is also 5-1 on the season. It lost to Arkansas by a point on November 18 but has otherwise gone unblemished. The loss to the Razorbacks was the Hoosiers’ lone road game of the year thus far. Both teams can really score so the scoring total figures to be pretty high for this matchup.

There were some expecting Duke to go much of the year without a loss so the defeat to Gonzaga was certainly a surprise. The Blue Devils fell behind by as many as 16 points in the second half but rallied before falling short, 89-87. Gonzaga missed multiple free throws down the stretch to give Duke a chance but the Blue Devils had four shots blocked in the last couple minutes as they couldn’t complete the comeback.

Star freshman Zion Williams had 22 points and 10 rebounds while while R.J. Barrett had a team-high 23 points. Even though Duke lost it was a good learning experience that may pay dividends down the road.

The Indiana big man should play a big role in whether or not the Hoosiers can hang around in this one. He is averaging 17.5 points, 9.0 blocks and 1.3 blocks per game on the season. Morgan is shooting 71.7 percent from the floor and hopes to get a multitude of easy buckets.

Morgan struggles from the free throw line and Duke would be smart to send him there when he has an easy look at the basket. Duke has the talent advantage on the court so the Hoosiers need players to step up, and Morgan is at the top of that list.

The loss last time out was but a bump in what should be a special season for Duke. Williamson should be able to dominate this game and the Blue Devils will pull away. Indiana is trying to prove it can hang with the big boys but this will be a dose of reality.

Take Duke in a blowout victory at home. The “under” could be the right call as the scoring will slow down late when the game is in hand.