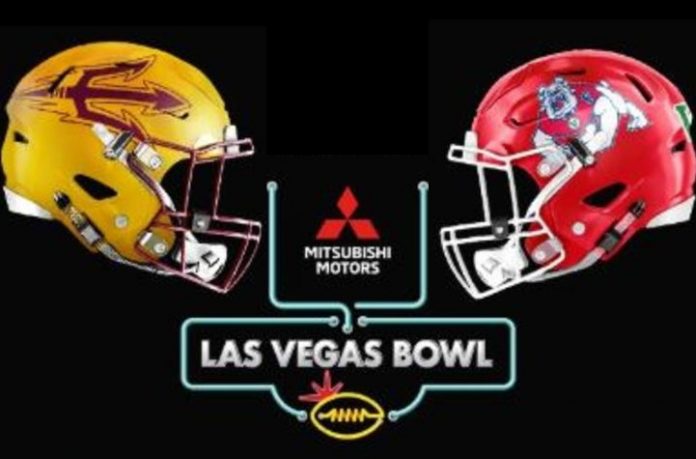 The Fresno State Bulldogs proved to be the class of the Mountain West Conference this season, and will look to put a feather in its cap with a victory in the Las Vegas Bowl. They will take on a major conference foe in the Arizona State Sun Devils out of the Pac-12.

This should be a good showdown as upper-tier non-Power 5 schools and middle of the road major-conference teams tend to match up well. The Bulldogs are expected to be the slight favorites but this game could go either way.

This game will be held at Sam Boyd Stadium in Las Vegas, Nevada at 3:30 p.m ET on Saturday, December 15th, 2018 and nationally televised on ABC.

Fresno State is listed as a four-point favorite to capture this game. The neutral site location makes it so that neither team gets points for the home field, which means the oddsmakers believe the Bulldogs are the slightly more talented team.

The Sun Devils are the +160 underdogs on the moneyline, while Fresno State is the -185 favorite. The scoring total is listed at 52 points.

Arizona State star wide receiver N’Keal Harry isn’t hurt, but he’s not going to play in this game to avoid that exact fate. Harry is projected to be a first-round pick in the NFL draft, and like other stars, has decided to bypass the bowl game. It is a trend that has become more popular in recent years and it is hard to blame a player like Harry for thinking about his future.

It is a big loss, as Harry has 73 catches for 1,088 yards and nine touchdowns on the season. He has also been an impactful punt returner and Arizona State’s offense will not be as scary without him. The Sun Devils still have a senior quarterback in Manny Wilkins, but figure to lean on star running back Eno Benjamin, who has amassed 1,524 yards and 15 touchdowns on the season.

Fresno State scored 38 points in its other game against a Pac-12 team, rolling to a 24-point win over the UCLA Bruins in non-conference action early in the year. Quarterback Marcus McMaryion had a solid game, completing 22-of-33 passes for 270 yards and a touchdown.

Fresno State averaged a meager 2.9 yards per carry in the contest and will need to do better than that on the ground against Arizona State. The Sun Devils are a much better team than UCLA and this one does not seem likely to be a blowout.

Who To Bet On

Fresno State has a star quarterback in McMaryion who has thrown 25 touchdowns and only three interceptions on the season. However, the Arizona State defense has been solid this season and will make him earn the yards in this one.

If the Sun Devils had Harry they would be the pick, but his absence is going to make the offense too one-dimensional. Fresno State will have the better passing game and that will be the difference in this matchup. Take the Bulldogs to knock off another Pac-12 team to wrap up a very successful season. However, Arizona State is the choice to cover as this should be a competitive matchup.