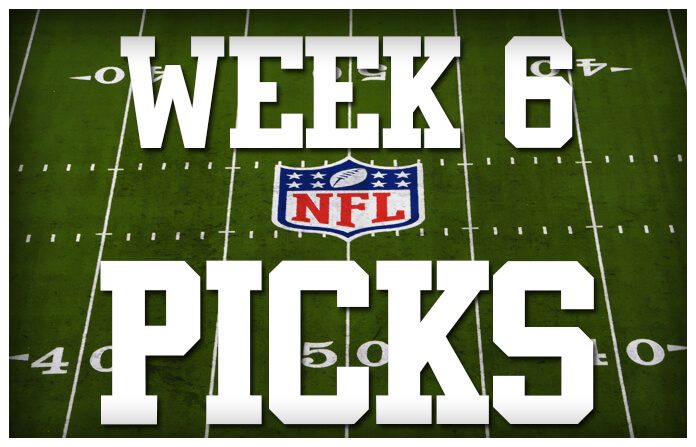 After a mediocre record of 6-9 against the Week 5 games, we’re once again stuck with a losing record looking to climb our way out of a slump. With that in mind, this week we’re going to try and get back to basics with our picks in Week 6 — backing some home underdogs and trusting the trends even if they don’t look like the best bets.

So reload your Bookmaker account and check out our predictions for who covers for NFL Week 6.

Why?: The Giants are home underdogs on Thursday night in a game that is supposed to be wet and rainy. The Eagles are missing running back Jay Ajayi and could be without star left tackle Lane Johnson, leaving their offense depleted. Take the Giants and the points.

Why?: The idea of the Buccaneers’ receivers running all over the Falcons banged-up secondary is terrifying, but the Falcons need a win and have shown an impressive ability to score all season despite last week’s disappointing performance. Taking the Falcons here.

Why?: Games between these two divisional foes are always tight, but the Steelers haven’t looked better than the Bengals all season. Public perception is likely still on Pittsburgh thanks to their collection of big-name talent, but Cincinnati should be good for the victory. Take the Bengals.

Why?: Three of the Browns’ five games this season have gone to overtime — why not grab the free point against the Chargers to stay safe in case the game ends in a tie? Take Browns to cover.

Why?: The Raiders have played abroad the past two seasons, while this will be the Seahawks’ first trip to London as a part of the NFL International Series. Take the points with the team that has experience adjusting to the time difference.

Why?: Mitch Trubisky’s impressive six-touchdown performance in Week 4 isn’t enough to convince me he’s ready to be a road favorite. Take the Dolphins here.

Why?: Last time the Vikings were double-digit favorites they lost outright to the Bills. Arizona might be one of the worst teams in the NFL, but we were saying the exact same thing about the Bills before their outright upset. Take the points with the Cardinals.

Why?: NFC East teams are a woeful 1-5 against the NFC South, with the Eagles win over the Falcons to open the season the East’s sole victory. Trust the trend.

Why?: The Houston Texans have no business being favored by double digits against anybody in the NFL, which is why I love them in this spot. If the line is this long, oddsmakers must know something we don’t.

Why?: Yet another home underdog, the Broncos are likely a better team than the Seahawks, who just pushed the Rams to the brink of their first loss last weekend. Hopefully, Case Keenum can find a way to keep things close. Take the Broncos and the points.

Why?: Another line that’s too fishy to be true. It felt like the Jaguars would be closer to 4- or 5-point favorites in this game, as the Cowboys have looked fairly stagnant to start the year. Trusting again that Las Vegas knows something that I don’t. Take the Cowboys here.

Why?: Seeing as it’s hard to imagine a worse spot in football than losing to the Bills, the Titans look to be in a fantastic bounce-back position this Sunday hosting the Ravens. Take the Titans and the points.

Why?: In a battle for AFC supremacy, the Chiefs are going to have to take down the Patriots before I feel comfortable betting on them to do so again, so for now, my money is on New England. Kansas City started out 5-0 last year too, you know. Take the Patriots to cover.

Why?: Packers have a habit of pouring it on at home. Despite whatever problems Aaron Rodgers and head coach Mike McCarthy are having, Green Bay should be able to cruise in this one. Take Green Bay to cover the spread.

Check out the latest NFL Week 6 betting odds as of today.