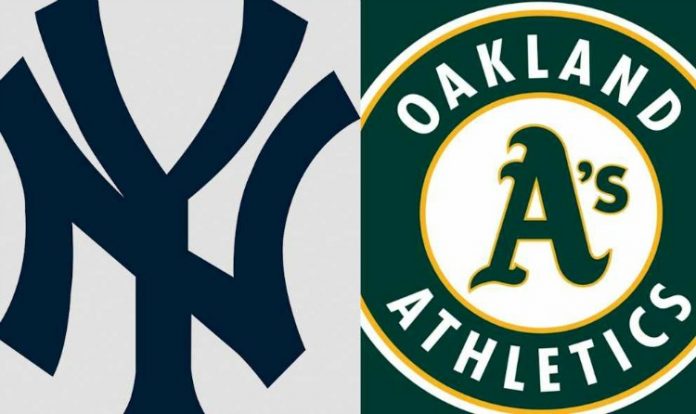 The New York Yankees play host to the surprisingly resilient Oakland Athletics in a win-or-go-home affair on Wednesday for the AL Wild Card game. The upstart A’s have continuously defied the odds and will look to beat the Yankees in New York just like they did in two of three games a few weeks ago.

The first game is scheduled for Wednesday, October 3, 2018, at 8 pm ET at Yankee Stadium. The match-up will be shown on TBS.

Looking to bet on MLB? This guide will help you work out which are the best bookies for betting on baseball.

These two teams have meet just six times in the regular season, splitting those six games with three wins a piece. The home team has won four of the six meetings which would seemingly give the Yankees an edge. After all, New York and Oakland both have better records at home than on the road, but the A’s can still hold their own away from the Coliseum.

One of the reasons the A’s have been able to win both at home and on the road is the offense. The A’s play in a pitcher friendly atmosphere, but their offense can get it done regardless of park.

While the Yankees are known as a powerhouse offense with a league leading number of home runs, they’ve only scored 40 more runs over the course of the season than the A’s. Oakland ranks fourth in baseball in runs scored, the Yankees are second. Both offenses can score. Meanwhile, in the second half of the year, the A’s have the most runs scored in baseball with the Yankees right behind in second.

For Oakland, the offense is spread out throughout the order. Khris Davis provides a ton of thump in the middle with 48 homers and 123 RBIs, but he’s one of five players with at least 23 jacks. There’s power up-and-down the order, but there’s also solid OBPs from every position save catcher. This team puts together quality at bats and has nine players with at least 170 plate appearances and an OPS+ of at least 113. That’s an elite offense.

These two lineups are both deep and powerful. Though the A’s may be the healthier of the two. The Yankees have Aaron Judge and Gary Sanchez both in the lineup, but each have struggled since returning from the DL. Didi Gregorius is also a question mark. He’s playing despite torn cartilage in his wrist, but the level he’s able to perform remains in question.

Neither team has come forward with their plans on the mound in this game. The Yankees have a few different options in Luis Severino, Masahiro Tanaka and J.A. Happ. The A’s, meanwhile, could go with Mike Fiers, Edwin Jackson or could opt for a bullpen game, taking a page out of the Rays’ playbook with the ‘opener.’

Oakland has been playing around with the opener over the last month, using both Lou Trivino and Liam Hendricks in that role. The last time Fiers pitched, Trivino got the start and Fiers came in during the second inning to give some length. That could be the game plan.

Regardless of who the A’s throw, he won’t be going deep in the game. Oakland will try and get two time through the order from whoever is deemed the starter—whether he actually starts the game or not. Beyond that, bullpen will be asked to carry the load.

For the Yankees, they have a bit more certainty in their rotation. Luis Severino was a Cy Young candidate in the first half of the year. He struggled after the All-Star break but has been throwing better his last couple times out. He’s 19-8 with a 3.39 ERA while Tanaka is 12-6 with a 3.75 ERA and Happ is 7-0 with a 2.69 ERA in 11 starts since joining the Yanks.

Regardless of who starts for the Yankees, they’ll have the edge on paper, but these two teams may use their arms in a different manner than we’re accustom to seeing come October.

For both teams, don’t look for the starter to go too deep in the game. With this one game deciding who goes home and who goes on to the division series, look for both teams to be quick to go to their deep bullpens.

Athletics vs Yankees – Who To Bet On

It’s hard to pick against the Yankees. They’ve got the money, the names and the prestige. They also won this game last year, but the A’s have been a scrappy underdog team all year and have managed to defy odds at seemingly every turn. Look for the same on Wednesday night.

Both the A’s and Yankees will rely heavily on their bullpen throughout the night but look for the A’s to come out on top, just barely.

Oakland will get a few early innings from its starter, or the pitching that follows the opener, depending on how Bob Melvin opts to go, but the star will be the bullpen and the offense. The Yankees have out-homered the A’s, but Oakland can find a way on offense with plenty of power and an innate ability to get on base and do the little things to win.

The A’s have been the best team in baseball since the middle of the year. They’ve done it despite a lackluster starting rotation and they’ll do it again on Wednesday. In a one-game play-in, they just need enough pitching and it doesn’t matter how they get it. The lack of clear answers in the rotation may bite them deeper in the playoffs, but not on Wednesday night.