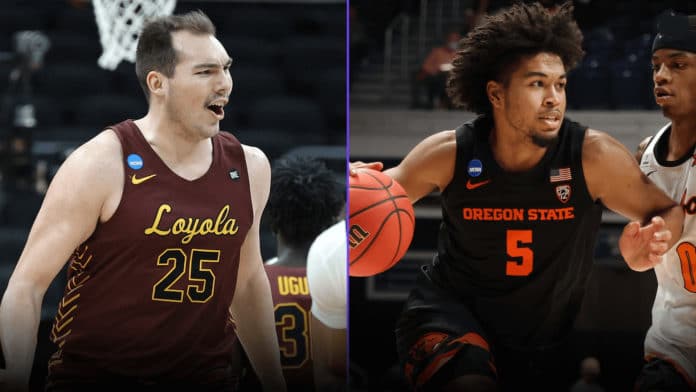 You can’t call the Pac-12 the weakest power conference anymore. With one quarter of the Sweet 16 residing in the “conference of champions’ it’s safe to say the league has left its mark regardless of what happens this weekend. The biggest surprise of the group is the Oregon State Beavers, who wouldn’t be dancing if not for their upset win the Pac-12 tournament. Winners of five in a row the Beavers have an unlikely matchup with the Loyola-Chicago Ramblers on Saturday.

This NCAA Tournament Sweet 16 matchup will air live on CBS at 2:40 p.m. ET on Saturday, March 27, 2021 from Bankers Life Fieldhouse in Indianapolis, IN.

It’s not how you start it’s how you finish, isn’t that how the saying goes? The Beavers aren’t finished yet as they continue their improbable postseason run. They closed the regular season with a loss to rival Oregon and were just 14-12 SU and 16-9-1 ATS entering the Pac-12 tournament as the sixth-seed. Nobody gave them a chance to win it and that probably included coach Wayne Tinkle. But the Beavs hit another gear starting with an overtime win over UCLA in the first round of the conference tournament then knocked off Oregon and Colorado to win the Pac-12 title for the first time. They then posted double-digit wins over Tennessee and Oklahoma State in the first two rounds of the NCAA Tourney. OSU covered the spread in all five postseason games and is 12-1 ATS over its last 13 games. The Beavs are comfortable in the underdog role since they’ve gotten points on the closing line in eight straight games and in 12 of their last 13.

The Ramblers have been just as impressive getting to the Sweet 16, but their quest was not as unexpected. They went 16-2 winning the MVC regular season and conference titles. They breezed through the conference tournament with double-digit wins over Southern Illinois, Indiana State and Drake entering the Dance with a 24-4 overall ledger. They continued their run with double-digit wins over conference tournament champs Georgia Tech (SEC) and Illinois (Big Ten). Heck, they’ve been so good there were some folks upset at their No. 8 seeding. No worries, the Ramblers just take it out on their opponents winning five postseason games by an average of nearly 15 points while going 5-0 ATS.

Early season losses to Wyoming and Portland and a ho-hum regular season was not an indication of a Sweet 16 team. But getting hot at the right time makes all the difference. And not only are the Beavers hot on the floor, they’re on a major heater at the betting window. They beat Tennessee 70-56 as an 8.5-point dog in the first round and toppled OK State 80-70 as a 6-point pup. Leading scorer Ethan Thompson led the way against the Cowboys scoring 26 points and the Beavers’ best players were the best players in that upset win.

OSU’s size could prove to be disruptive. Led by 7-foot-1 center Roman Silva’s 12 rebounds and four blocked shots, the Beavs totaled 11 blocks making life difficult for Cade Cunningham. OSU is also one of the better free throw shooting teams in the country knocking down nearly 76 percent of their tries. They hit 32 of 35 against OK State and five players who play regularly are better than 80 percent from the stripe.

If defense does win championships the Ramblers are in a good spot. Nobody defended better during the regular season and things have gone to another level since the MVC tourney. Loyola owned the top-ranked scoring defense allowing just 55.7 points while going 21-4. They allowed fewer than 60 points in each of their last 15 games with the UNDER going 12-3. They held Georgia Tech and Illinois to a combined 7 of 24 from three-point range in the first two rounds.

You still have to score points and the Ramblers received a huge boost from Lucas Williamson to complement leading scorer Cameron Krutwig. Williamson hit 8 of 13 shots for a season-high 21 points against Georgia Tech and followed that with a 14-point effort in the win over No. 1 Illinois. He averaged just 8.8 points during the season.

This Ramblers’ squad is better than the team that reached the Final Four a few years ago. They play a stifling defense and have enough weapons offensively to average over 70 points per game. It’s hard to imagine the Beavers continuing their magical run against such a well balanced group, but stranger things have happened. The strange took place last week with a pair of big OSU upsets. The Beavs won’t back down which is why I’ll take the points, but Loyola is too strong.