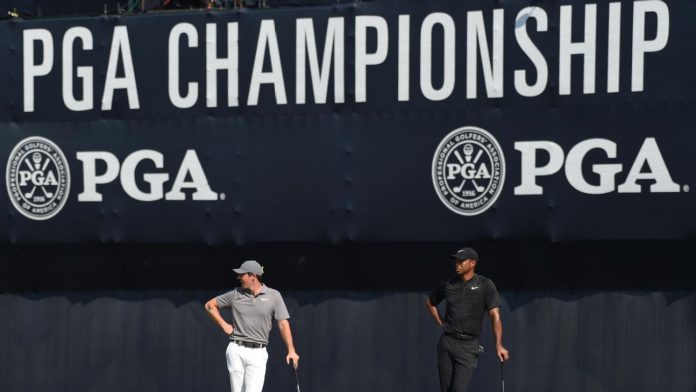 Get ready for the first golf major of the year, the PGA Championship, which begins in San Francisco on Thursday. In a normal year the first major of the season would be the Masters, but 2020 has been anything but normal. There will be just three majors this year, the PGA, the U.S. Open in September and the Masters in November. World No. 1 Justin Thomas is listed as the favorite, while two-time defending champion Brooks Koepka is the second choice in the betting odds. Let’s look at the PGA Championship, the odds and PGA picks.

When it comes to major championships, Brooks doubles down.#PGAChamp pic.twitter.com/v60QnXxq6H

All other players are listed at odds of 100-1 or more or they are part of the field.

TPC Harding Park is located in San Francisco and is a par 70 that measures 7,234 yards. The course has narrow fairways, numerous trees and rough that can be ankle deep. Even though Harding Park is located on Lake Merced there is only one water hazard and it is on the final hole. Tiger Woods won on this course in 2005 and shot 10-under par.

Length off the tee always helps, but bombers won’t have a huge advantage on this course because golfers who miss fairways are going to struggle out of the rough. The greens are going to be tougher than they would have been in May because they will be firmer and faster.

There are some long par 4’s that play more than 460 yards, but there are also a couple of par 4’s that could be drivable at lengths of 340 yards and 336 yards. The par 5’s are brutal, so don’t except many birdies on the par 5’s.

There are six players listed at odds of +1616 or less.  Justin Thomas is the favorite and he should be, as he is coming off a win last week and he is currently the No. 1 ranked golfer in the world. Thomas didn’t play last year’s PGA due to injury, but we know he can win majors, as he won the PGA in 2017. It is tough to make money betting favorites in golf, but Thomas is definitely a player worth considering this week.

Koepka is the two-time defending champion and he played well last week at the St. Jude Invitational, but he is dealing with a knee injury.  Koepka has been excellent in majors recently, but will he be able to hold up after playing last week?

McIlroy has not played that well since golf’s return and although he is extremely talented, it is hard to see him turning things around and playing at a high level considering we haven’t seen great form from him in months.

Jon Rahm was ranked No. 1 for a week and then Thomas took over the top ranking. Rahm didn’t play well last week at the St. Jude, but you could almost see that coming, as he won the previous week. The question this week is whether or not Rahm has the accuracy off the tee to stay out of the rough.

You can say the same thing about DeChambeau who has struggled the last couple of weeks after looking like the best player in the world for weeks. DeChambeau hits the ball a ton, but it is hard to see him staying out of the rough this week.

What we said about Rahm and DeChambeau also applies to Dustin Johnson who is long off the tee but sometimes struggles with accuracy.

You can make a serious case for at least 10-20 golfers as darkhorse contenders and perhaps you could go 30 or 40 deep.  There are 15 golfers listed at +5550 or less and any of those players could win. As part of that list are Tiger Woods, Webb Simpson, Patrick Cantlay and Rickie Fowler. Woods hasn’t really looked very good since the return, playing in just one event, but the public will bet him simply because of his name. Simpson is without his regular caddie so it is hard to make a case for him. Cantlay and Fowler could be worth considering, as each hits the ball straight and is considered a top player.

You can definitely make a case for Thomas, but I rarely bet favorites. If you want to take Thomas, I sure won’t argue, but I will look for more value. Xander Schauffele is a player who looks ready to win a major.

He had a good final round last week and finished in the Top 10 and if he can avoid that one below average round that seems to plague him each week he can win.  We get him at +2052, so there is a little value.

Hideki Matsuyama is listed at 35-1 and his is a player who is ranked in the Top 25 in the world. He finished fifth in the PGA in 2017 and he was fourth in 2016. I expect that Matsuyama will be in the mix this week.

I want to mention two more players in Webb Simpson and Brendon Todd. I am worried about Simpson not having his regular caddie, but it should be noted Simpson is a world class player and he is very accurate off the tee. He is listed at 30-1. I also have to throw in Brendon Todd as a live longshot at 80-1. Todd is ranked 3rd on the PGA Tour in accuracy and he is 9th in the latest FedExCup rankings.