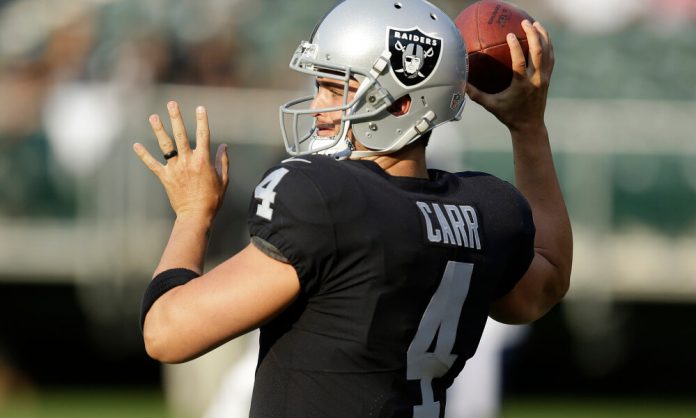 The 2016 season of the Oakland Raiders was effectively over the moment Derek Carr was carted off the field with his broken leg. They’re going to hope that a back injury suffered last week in Denver isn’t going to be the beginning of the end of their campaign in 2017.

The face of Oakland’s franchise isn’t facing a tremendously long rehab time from a small fracture in his back. Essentially, his return is going to be dependent upon when he has full mobility in his back and can play through the pain caused by the issue. Problems like that could linger, though, and the Raiders are going to be particularly careful with their most coveted asset.

The biggest issue the Raiders had last season was that they didn’t have an insurance policy in case anything happened to Carr. Most teams don’t have backups that are anywhere near as good as their franchise quarterbacks, but Connor Cook and Matt McGloin were nothing to write home about.

This caused the Raiders to go out and sign former Buffalo starter EJ Manuel to be Carr’s backup. Though Manuel is probably a step up from Cook and McGloin, there is a real concern just how viable he is entering Week 5 against the Oakland Raiders.

Cooley went on to state that the Raiders were set to open up as 6.5-point favorites against Baltimore on Sunday. Instead, once Carr was officially ruled out, BookMaker.eu went ahead and started the game off at a pick ’em.

The spread has since moved to Oakland -2 alongside a total of 40.

Part of the reason why the Raiders are going to give Carr some time to rest is due to the fact that they are probably going to be favored in each of their next couple games regardless as to who is under center. The Ravens have lost their last two games and have looked nothing like legitimate playoff contenders, while in Week 6, Oakland will host the winless Los Angeles Chargers.

“We expect to open the Raiders at -3.5 against Los Angeles if Manuel is starting at quarterback,” Cooley said. “We would have had to seriously consider making Oakland a double-digit favorite against the Chargers if Carr was under center.”

The Raiders already seem to be targeting a Week 7 Thursday Night Football encounter against Kansas City as the game which Carr could return to the lineup. That game could end up going a long way towards deciding the AFC West title, knowing that both of these teams are likely to finish with at least 10 victories this season.

Speaking about the Kansas City game, Cooley stated, “The Chiefs would be 3.5-point favorites against the Raiders in Oakland if that game was to be played this week with Carr out.”

But of course, Cooley was also quick to remind us that things change in a NFL a ton from week to week.

“There’s a lot of football left to be played between now and then.”

With Carr sidelined indefinitely, BookMaker adjusted its futures odds for the Oakland Raiders. Going into last week, the Raiders had +1400 odds to win the Super Bowl and now they have +2500 odds to win.