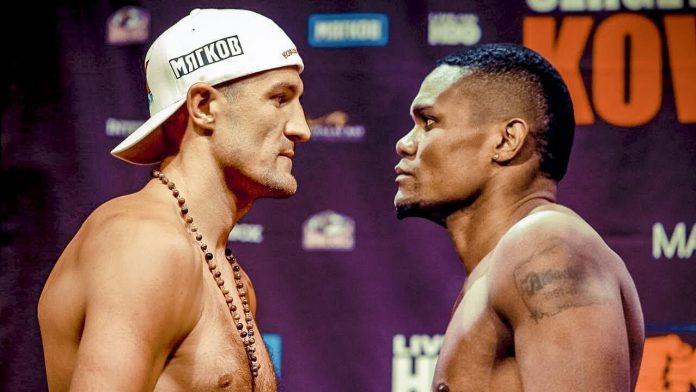 Sergey Kovalev will put his WBO and IBA light heavyweight championship belts on the line when he faces off against Eleider Alvarez in a much-anticipated bout this weekend. Kovalev is the fighter to beat as he has a strong resume and is expected to hold on to his title.

Alvarez has never lost so he certainly deserves a shot, but this will be an uphill battle. The oddsmakers don’t believe Kovalev will have a ton of trouble coming away with the victory. He has bounced back from a pair of losses to Andre Ward to win two straight fights and still must feel like he is in prove-it mode after those high-profile defeats.

Alvarez could turn heads across the world with the upset victory in this light heavyweight title fight.

Kovalev is checking in as the clear favorite, as the oddsmakers have put him as the -496 favorite. Those are solid odds and it would certainly be an upset if Alvarez wins, but they are not insurmountable. Thus far, the majority of the money is on Alvarez to pull off the win as the underdog as it would pay off nicely at +394. Check closer to the fight to see if either side gets a large allocation of money.

Kovalev won the vacant WBO lightweight title in November 2017 when he defeated Vyacheslav Shabranskyy by technical knockout in the second round. He’s made one successful title defense since obtaining the crown and will go for his second in New Jersey this weekend. The 35-year-old came into that fight against Shabranskyy last year after losing back-to-back bouts — his first two losses of his career — both at the hands of Andre Ward. Kovalev has an overall record of 32-2-1 and has won an impressive 28 of those fights by knockout.

Alvarez comes in with a perfect record of 23-0 with 11 knockout wins and 12 victories by decision. The Colombian fighter’s latest victory came in June of 2017 when he defeated Jean Pascal by decision. He also has recent wins against Lucian Bute and Norbert Dąbrowski. This will be a big opportunity for the 34-year-old to break out on a big stage and he should be considered a worthy challenger.

Even though Alvarez has the superior record, the level of competition has not matched that of Kovalev, as he has only fought two times outside of his home base of Canada in his career. He could be in for a big surprise as Kovalev is one of the best boxers in the world when everything is going right for him.

Alvarez’s lack of knockout power is a bit concerning, as the best fighters usually dominate the competition until they get to the elite level. Then again, Kovalev has something to worry about himself after the recent losses to Ward.

Kovalev isn’t being talked about any more as the best pound-for-pound fighter in the world but he is still really good. While Alvarez is more than deserving of this chance, it’s unlikely he comes away with the belt.

Kovalev is the more powerful fighter and should pick up the victory via knockout to retain his light heavyweight championship belts.

Check out the today’s boxing odds.