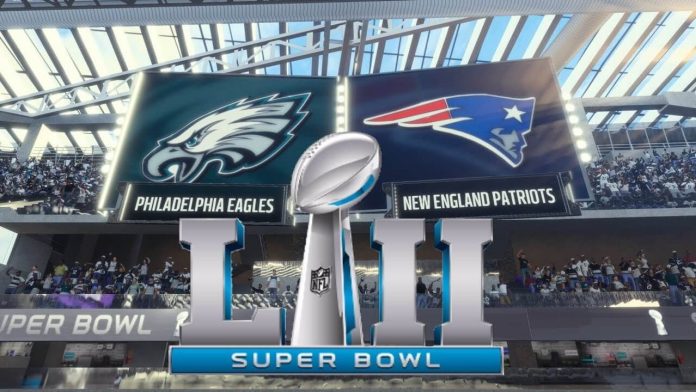 The New England Patriots are favored in Super Bowl LII on Sunday, February 4, as they take on the Philadelphia Eagles.  It is a matchup between the two top seeds, as the Eagles had the best record in the NFC, while the Patriots had the top mark in the AFC. The Eagles have never won a Super Bowl, losing to the Raiders and Patriots. New England has played in a total of 10 Super Bowls, winning five and they need one more win to tie the Pittsburgh Steelers for most Super Bowl wins with six. Let’s look at Super Bowl LII and predictions.

The top two seeds are meeting in the Super Bowl, as the Eagles take on the Patriots, but it is not really a matchup many people expected. The Eagles were not thought to be a serious contender, after they lost quarterback Carson Wentz, but Nick Foles has played well and the Eagles will be going to their third Super Bowl. On the other side, the Patriots had to rally from 10 point down to defeat Jacksonville in the AFC Championship Game.

This will be a neutral site game in Minnesota, but we’ll consider road stats for both teams.  The Eagles were 5-3 ATS on the road during the regular season, with five games going over and three going under. The Eagles are scoring just over 28 points per game and giving up about 18 per contest.

The Patriots were 6-2 ATS on the road this season, with six games going under and just two going over. They are scoring just over 28 points per game and giving up about 18 per contest.

This game will probably come down to how well the Philadelphia defense handles Tom Brady and the New England offense. The Patriots just handled the best defense in the NFL in Jacksonville and now they get an Eagles defense that is not far behind. The Eagles have allowed just 8.25 points per game in their last four games. Philadelphia has a very tough defensive line with Fletcher Cox on the inside and edge rushers Brandon Graham, Derek Barnett, Chris Long and Vinny Curry. The Eagles led the NFL in quarterback pressures this season. Philadelphia was fourth in the NFL in takeaways with 31. If the Eagles can pressure Brady and make him uncomfortable they will have a chance to win this game.

These teams have met 13 times in history going back to 1973 with the Eagles leading the all-time series 7-6. Their last meeting was in 2015 when the Eagles won 35-28 at New England. The teams played in Super Bowl XXXIX with the Patriots winning 24-21.

Eagles vs. Patriots Predictions and Picks