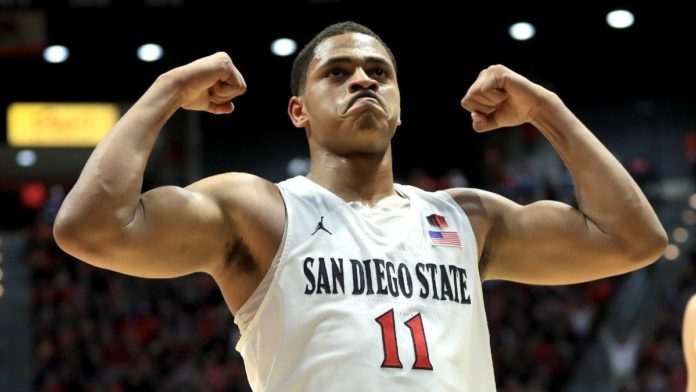 The San Diego State Aztecs left no doubt about their inclusion in the NCAA Tournament winning the Mountain West Conference championship over Utah State for their 14th consecutive victory. As the No. 6 seed in the Midwest Region, the Aztecs get the feisty Syracuse Orange in a first-round tilt on Friday.

Syracuse snuck into the Tournament again when many had them pegged as a First Four participant or even bound for the NIT. Yet here they are thanks to their affiliation with the ACC. San Diego State hit the board as a 2-point favorite on the college basketball line with that number wagered up a full point. The Aztecs are 9-5 ATS over the course of their current winning streak.

This NCAA Tournament game will air live on CBS at 9:40 p.m. ET on Friday, March 19, 2021 from Hinkle Fieldhouse in Indianapolis, IN.

No doubt the ACC is a tough conference with seven teams getting invited to the Dance. Syracuse is the lowest seed of those clubs after going 16-9 SU and 12-13 ATS. Losses to Duke and Georgia Tech at the end of February had the Orange reeling, but they seemingly locked up a bid by winning the next three games. They closed the regular season with massive wins over North Carolina, 72-70, and Clemson, 64-54, teams ahead of them in the league standings who are also dancing.

Beating NC State in the first round of the ACC tournament was just icing on the cake. A close loss to Virginia in the quarters didn’t hurt their hopes. As it was the Orange did enough to earn an at-large berth, according to the committee. They dropped a pair of games to Pitt, which finished the year at 10-12, so there remains work to be done for Jim Boeheim.

A few years ago the Aztecs appeared headed to the NCAA Tournament after winning 25 games and the MWC regular season title. They lost in the title game of the conference tournament and were left out of the field in what was a slap in the face to one of the most dominant teams on the West Coast over the past several years. They made sure that wouldn’t happen in 2021 by winning the tournament. They head to the Dance on a serious run of 14 straight victories fueled by a defense that did not allow more than 71 points in any of those games with nine of them decided by double figures. SDSU enters the Tournament with a 23-4 SU and 14-12 ATS overall record.

Being a double-digit seed is rare for Syracuse. It’s only the third time in 33 trips under Boeheim. The previous two produced memorable runs. Cuse reached the Final Four as a No. 10 seed in 2016 and advanced to the Sweet 16 as a the 11th seed in 2018. Maybe this year’s squad can learn a few things from the past. If the Orange are to advance they’ll have to do it on defense with Boeheim’s patented zone scheme, which can be a problem for teams that haven’t seen it.

Buddy Boeheim is a key figure in trying to expose the Aztecs’ defense. The team’s scoring leader at 17.1 points per game, Boeheim dropped 31 on UVA in the ACC tourney and scored 25 or more four times in the last seven games. There isn’t much depth with Kadary Richmond the only reserve averaging more than 10 minutes and 3.5 points.

One of the hottest teams entering the Tournament, the Aztecs are coming off a huge 68-57 win over rival Utah State in MWC championship game. Despite the setback the Aggies received an at-large bid giving the league a feather in its cap. Getting to the Dance is one thing winning is another. That hasn’t been an issue recently for SDSU, which enters on a 14-game run while going 9-5 ATS. Defense has keyed the run with the Aztecs owning the eighth-best scoring defense and ranked seventh nationally in field goal percentage defense. They are also 16th in turnover margin at plus-3.9 per game.

Mountain West Player of the Year Matt Mitchell leads the way averaging 15.4 points and 5.5 rebounds with Jordan Schakel the only other double figure scorer at 14.3. That doesn’t mean the Aztecs lack offense. They average over 74 points per game. “Everybody that plays for us contributes and it’s a different player every night,” Brian Dutcher said.

One thing that separates the Aztecs is their depth. They had at least three players score in double figures in all three games of the conference tournament with Trey Pulliam doing it in all three. And they shoot the three well at 45.5 percent, which is a good way to bust a zone. This could be a grind-it-out type of game with two stingy defenses, but that suits the Aztecs just fine.