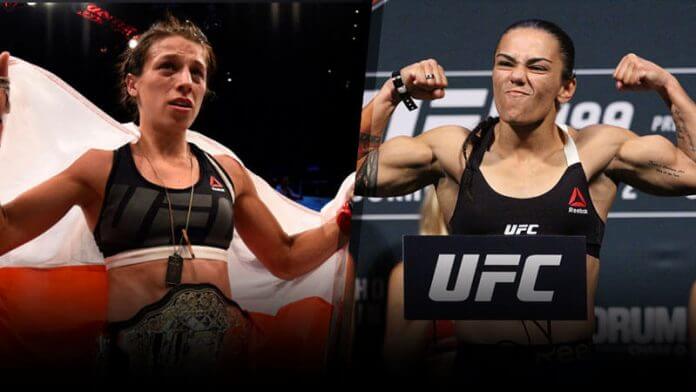 UFC strawweight champion Joanna Jedrzejczyk (13-0, 4 KOs, 1 SUB) will defend her title against bomber Jessica Andrade (16-5, 5 KOs, 7 SUBs) at UFC 211 on May 13, 2017, at the American Airlines Arena in Dallas, Texas. The main card airs on pay-per-view starting 10 p.m. ET following the FX prelims. Bet on the latest UFC odds at BookMaker.eu.

Joanna Jedrzejczyk might be the UFC’s smallest champion, but she’s easily one of its most violent. Undefeated in 13 pro fights – including five title matches – the Polish Mauler will defend her strap against an equally terrifying Jessica Andrade in the UFC 211 co-main event this Saturday.

If you’re a casual MMA fan, I need to take a few sentences to set your expectations for this matchup – they should be through the roof. J-Check is basically a Muay Thai machine that shreds apart opponents with picture-perfect striking and relentless pace. Andrade is no less dangerous, except she’s more like a mini-Wanderlei Silva, pressuring opponents and bombing on them with heavy shots. The epic potential of this fight, on a scale of 1-10, is 15.

Hyped yet? Good, because now it’s time to take a look at the UFC odds at BookMaker.eu and break this scrap down from a betting angle. Let’s make some fight predictions and a pick to net you some cash.

(Please note that UFC odds are updated daily and subject to change.)

Prediction: Andrade’s Strength Will Be a Factor

“Bate Estaca” is a former bantamweight, fighting 20 pounds heavier than the 115-pound strawweight limit. As a 135er, she was short, stocky and powerful. In this division she’s still short, but she’s a freakin’ animal. Her and Claudia Gadelha are the two most powerful fighters in this division.

If Joanna has a weakness, it’s that she can be overwhelmed physically. Gadelha was able to drag her to the mat – though it really took a lot out of her. Andrade can do the same, but she’s also got an x-factor here: she is a much more polished striker than Gadelha. We’ve seen Joanna floored on occasion, and she’s facing the hardest hitter in the division.

Prediction: Joanna’s Cardio Will Take Over

Joanna is one of the few fighters who have weaponized their cardio. She can win fights by exacting such a high pace that opponents just wilt. Gadelha was able to steal a few rounds off her, but was left huffing and puffing after the third round. Meanwhile, Jedrzejczyk looked like she could go another 25 minutes easy.

Andrade cuts a ton of weight to make 115, and while she hasn’t had any gas tank issues thus far, she also has never fought past a third round. Joanna’s last three fights have gone to the final bell and she barely broke a sweat in any of those. She did get touched up, but that didn’t seem to affect her cardio at all.

Andrade is arguably the most dangerous opponent Joanna Champion has faced. She throws tight, brutal combinations with thudding power. Against an hyperactive Angela Hill, Andrade kept the pressure on for 15 minutes. But the champion is a different type of fighter – her combination of striking, endurance and will is unmatched at 115 pounds. While Andrade will have her moments, J-Check should emerge victorious.

There are two solid bets here. One is Jedrzejczyk to win at -175, for all the reasons listed above. The other is the over on 3.5 rounds at -200. It’s an interesting round total, considering that strawweight matchups usually have the highest possible over/under.

The over/under also protects from an upset by Andrade, who is definitely a live underdog. But at -200, it’s a bit hard to stomach. The pick is Jedrzejczyk to win.