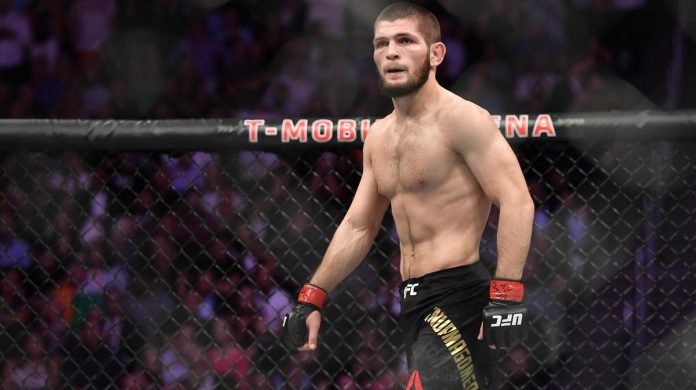 The UFC heads to Abu Dhabi this Saturday, and it’s calling on it’s most famous Muslim fighter to headline a card in a Muslim-dominated, MMA-crazed country. Khabib Nurmagomedov will return from a suspension this Saturday to meet Dustin Poirier in a title unifcation match – and there’s no doubt he’ll receive a hero’s welcome from the home crowd.

The Russian is now one of the sport’s biggest superstars, and circumstances always seem to limit his actual fighting appearances – something which only make his fights that much bigger. Poirier is an excellent comeback fight, as The Diamond’s six-fight winning streak includes victories over a murderer’s row of opponents that includes Anthony Pettis, Justin Gaethje, Eddie Alvarez and Max Holloway.

On top of that, Poirier is consistently one of the most exciting fighters in the game, authoring multiple Fight of the Year entries. After winning the interim strap, he produced one of the year’s best quotes when he declared that his title was “paid for in blood”. After a long career filled with all out wars, that’s a statement nobody can argue with.

The Eagle’s return already makes this one of the most anticipated pay-per-views of the year, but the UFC made sure to load up the card with some excellent fights.

The co-main event between Edson Barboza and Paul Felder is a banger, while Islam Makhachev has the chance to prove that he’s more than just Khabib’s training partner in a matchup with Davi Ramos. Heavyweight contender Curtis Blaydes will try to further distance himself from a knockout loss to Francis Ngannou in a tilt against Shamil Abdurakhimov.

Let’s take a look at the UFC odds at BookMaker.eu and break down the best betting picks. Live UFC betting at the online sportsbook lets you make in-play bets during any of the fights as well. The Safe Pick: Nurmagomedov to win at -425

Obviously, this isn’t a cheap bet – but we feel it’s playable as a parlay booster. Poirier is a gangster, but not a single opponent (save for a blown up Glieson Tibau) has been able to stay off his back against the Russian. That’s a list that includes some of the lightweight division’s best athletes, coming off training camps where they probably drilled takedown defense for months straight.

While Poirier might have the juice to keep this fight on the feet for a round or two, Khabib just needs one takedown to win the fight. Just to clarify, I’m not saying that he finishes fights as soon as it gets to the ground – but that first takedown leads to a brutal period where opponents are simultaneously suffocated and smashed for minutes on end. After that, every attempt becomes easier for the generation’s best wrestler. Given Nurmagomedov’s relentless pressure, we just don’t see Poirier keeping the fight standing for 25 minutes.

The Hedge Play: Poirier inside the distance at +450

Hear me out: Khabib’s only real weakness is that he tends to fade late in fights. His takedowns are less fierce in the later rounds, and we saw McGregor and Barboza able to defend multiple attempts after the 15 minute mark. Poirier’s cardio is top-notch, as well as his ability to surprise opponents with lethal power shots deep into scraps. The Russian should absolutely be the favorite, but this bet’s payout is an excellent hedge while covering Poirier’s most likely path to victory. We get it: in a matchup between strikers, why wouldn’t we go with one of the division’s most electrifying knockout artsts in Edson Barboza? The Brazilian’s highlight mixtape is arguably the best in company history, and his kicks should be registered as lethal weapons. We’re also obsessed with how he will target a specific area for an entire fight, like when he mauled Anthony Pettis’ legs are when he turned Dan Hooker’s stomach into mush.

But the thing with Barboza is that he tends to crumble under constant pressure. And for all his flashy strikes, Felder is a guy that will return them in full creative force. As a talented fight commentator, The Irish Dragon’s fight IQ is undeniably high, and there are a number of guys who have laid out a clear blueprint to beat Barboza. In this case, we see Felder’s underrated clinch game playing a big role – making a minor upset is a major possibility.

With his 17-1 record, Makhachev probably deserves a top 10 opponent by now, but Ramos is an underrated lightweight who provides an interesting style matchup. Makhachev thrives when he’s overpowering his opponents with his powerful wrestling, but Ramos is an accomplished BJJ practitioner. Still, Makhachev’s power and top control should be able to neutralize any submission threats from Ramos.

Shamil Abdurakhimov benefits from being a Dagestani fighter on this card, as he probably needed another win or two before meeting somebody of Blaydes’ stature. We really don’t see any paths to victory the Russian here, as he’s facing a faster, more athletic fighter 12 years his junior. On top of that, Abdurakhimov is at his best when he can bully other guys with his wrestling, but Blaydes is a decorated collegiate wrestler with more talent in this area.